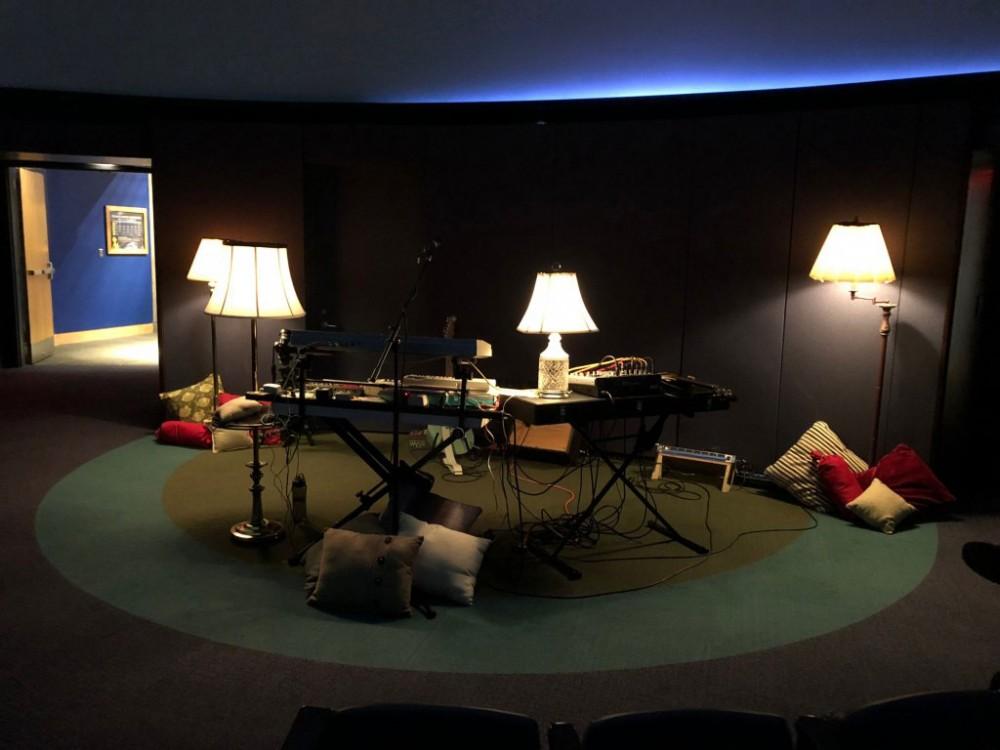 The Grand Rapids Public Museum’s “Concert Under the Stars” series uses imaginative flare and fascinating visuals from beyond the stratosphere to introduce community members to local Grand Rapids musicians.

Complete with three-dimensional visuals projected onto the dome of the planetarium, concert-goers are dazzled with impressive live music performances. The first concert of the season was held on Thursday, Jan. 17 with a performance by ambient sound designer and songwriter Fiona Dickinson. Live visuals were directed by Grand Valley State University visiting professor Meghan Moe Beitiks, along with three of her students.

Beitiks, a member of GVSU’s Department of Visual and Media Arts, met with Dickinson to discuss the visuals that were broadcast onto the dome, agreeing to capture themes present in Dickinson’s work.

“She was born in the Middle East, and so (she) wanted to speak to that aesthetic and where the music comes from,” Beitiks said. “There’s a lot of bright sunshine and kind of clouds and wisps of windswept sand in the show.”

Vic Martinez, a fine arts student, was asked to work on the project as an assistant media designer, recruited with their talents in mind. Martinez used their skills in 3-D and video editing programs to design visuals for Dickinson’s song “Pillow.”

“Actually working on it was challenging, but in a good way that allowed my skills to grow,” Martinez said, referencing their improvement with 3-D programs.

Martinez said that working behind-the-scenes with the Grand Rapids Public Museum allowed them to better understand the process of organizing these events and working with the museum was a great experience.

“I would get to go to the practice sessions and watch the entire performance run through,” Martinez said.

“Watching the visuals alongside the songs by Fiona Dickinson was an experience I’ll always hold with me.”

Future concerts will feature work by Beitiks and two additional visual media students, Grace Sementkowski and Calvin Garvey, who will design visuals for one song.

The “Concert Under the Stars” series began in 2017 and has continued with several shows per season. Each concert revolves around a different genre of live music played by local artists. Planetarium and Theater Manager Emily Hromi said the concert series began as a way to use the planetarium for a new purpose.

“It’s not solely a tool for teaching people about astronomy,” Hromi said. “It can be anything you want it to be.”

“The usual audience hears about this and think that it sounds cool even though it’s not necessarily their thing… (We) hope that then they hear new local music that they wouldn’t have otherwise heard about,” Hromi said.

The next concert will take place Thursday, Feb. 7 at 7:30 p.m. and features Frankie & Myrrh, along with visuals by GVSU students. Ticket information can be found on the Grand Rapids Public Museum website.