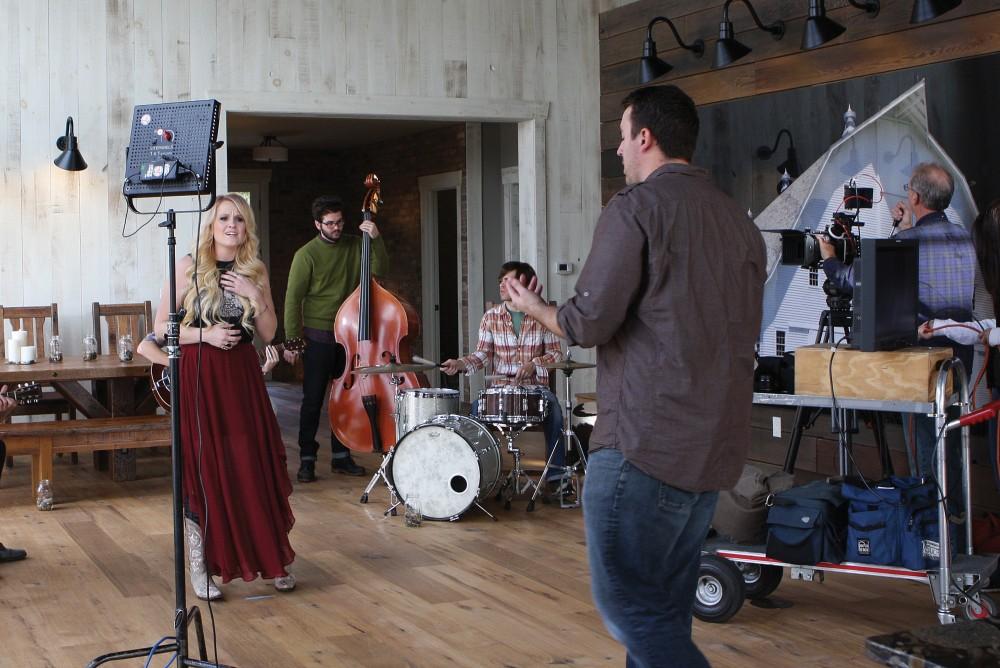 On Oct. 30, a barn in Ada, Mich., was transformed into a video set with production lights, cameras and several instruments for the shoot of Kari Lynch Band’s first music video.

Lynch, the band’s lead singer who started writing music at the age of seven, gets inspiration from her life experiences, she said.

“Most of my songs are personal to what I’m going through… It was always just a way to help me figure out life,” Lynch said. “If something big happens … I grab my guitar and go sit somewhere—that’s always been the most natural feel for me.”

This mechanism and her interest in creative non-fiction led her to get a degree in writing at GVSU. Although there were days when she just wanted to focus on her music, she stuck with her education, she said.

Since graduating in 2010, GVSU has continued to congratulate her on her successes and even invited her to open for Justin Moore when he performed at the spring concert in 2012.

“What school does that? That’s so nice,” Lynch said. “I definitely love that I went to Grand Valley and graduated from such a great school, where obviously they care about their students after they graduate.”

Apart from Moore, Kari Lynch Band has also opened for The Band Perry, Miranda Lambert, Thompson Square and many more, some of which she still remains in contact with.

“People in country music … are just so welcoming and really supportive of one another,” Lynch said. “Most of the people we’ve opened up for have been just awesome to work with, awesome to share a stage with.”

Many of the artists have also offered up a handful of advice, the most important being to remain true to who she is as a musician instead of conforming to what is popular, she said.

“Do your own thing … people will love it or hate it, but hopefully they’ll love it because it’s you,” Lynch said. “You’re not trying to follow someone else; you’re trying to forge your own path.”

Like Lynch, Foster—director and creative editor for Such Video—also values the education he got at GVSU and has since gone on to make a name for himself.

After graduating in 2003 with a degree in film and video, he got a job right away as an assistant editor and spent 10 to 11 years living in Chicago and teaching at Colombia College.

In the length of time that he’s been working, he’s realized he can do the job anywhere, he said.

“I’ve worked on feature films, independent films, commercials, music videos, I’ve worked in Seattle, Santa Monica, Chicago, and I still came back to Michigan,” Foster said. “The support system is fantastic, the talent is fantastic, the locations are fantastic and there is a community that is looking to be born.”

Although college and life after graduation can get stressful, it is important to stick with it through the hard times, build relationships and ask questions when you don’t know what you’re doing, he said.

“Stay with it, it gets harder before it gets easier—no one ever told me that,” Foster said.

Since graduating, he has remained in close contact with Kim Roberts and John Philbin, who are both professors in the film and video department at GVSU.

With his recent return to the Grand Rapids area, he has a few guest lectures scheduled at GVSU and is in the works of acquiring an adjunct position at the university.