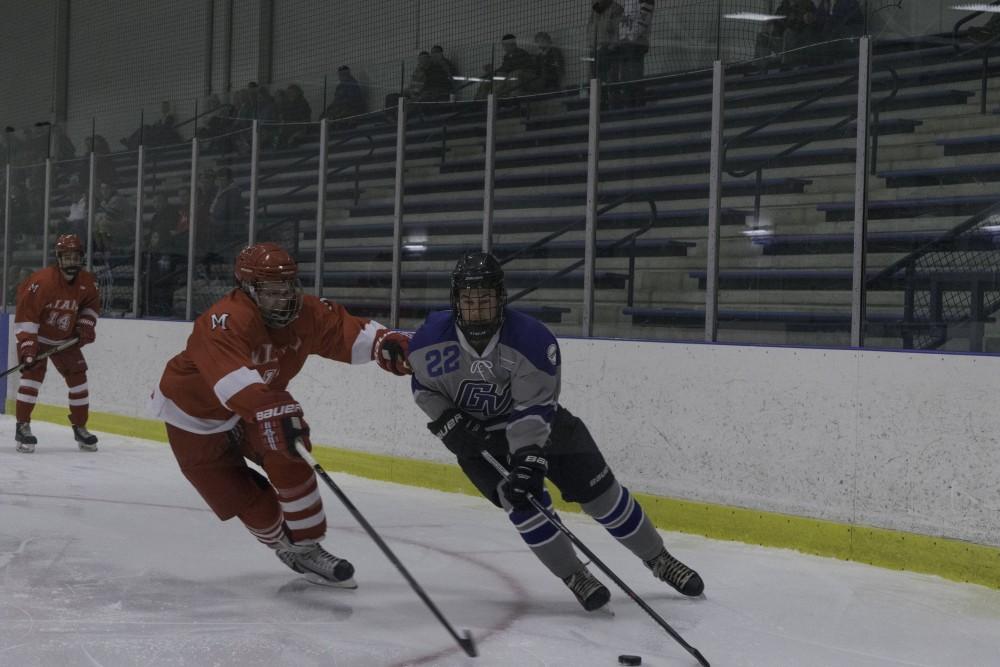 Through four games the Lakers have four wins in dominating fashion, outscoring their opponents this season by a margin of 38-8. In their games against Lewis University in Romeoville, Ill., GVSU used their depth and speed to overwhelm the Flyers on Friday, Oct. 19 8-2, and again on Saturday in the finale of the doubleheader 11-1.

“I think the biggest key to victory tonight was how well we moved the puck around,” said forward Ryan Hein after their game on Saturday. “Our lines clicked really well and we were able to take it to ‘em early and often.”

The Lakers opened up their first game with four goals in the first period from Connor McEvoy, Evan Newel, Trevor Zenas and Cameron Dyde. From there on they were in cruise control for the rest of the game, scoring three goals in the second period and one in the third as the Lakers turned in an impressive victory. McEvoy and forward Tommy Carey led the Lakers in scoring with two goals a piece.

In the second game, the Lakers picked up right where they left off, scoring early and often to cruise to another easy victory.

When asked if he saw any difference from this team in comparison to last year’s team at this point in the year, Hein pointed to their ability to score no matter which line head coach Carl Trosien put on the ice.

“The (biggest) difference that I’ve noticed when thinking about this team compared to where we were last year is that all four lines can score pretty well,” Hein said. “You don’t know how big of a deal it is to be able to put pressure on the other team (on offense) consistently throughout the game. It makes it a lot easier on the whole team.”

Early on before the regular season started, Hein said this season was a “national championship or bust” year for the team, and so far he thinks they are still on track to achieve that goal.

“I think we are where we need to be to get that championship,” Hein said. “There’s still a few things we can work on and get better at, but I think we are progressing nicely.”

Up next, the Lakers will face a tougher test in Lindenwood University-Belleville at home in a double feature on Oct. 26 and 27.

“They’re a little bit of a better team (than Lewis) so we’re going to have to come out and be ready to be physical and bang a little bit on the glass,” Hein said.

Hein did not seem too worried about their matchup with Lindenwood-Belleville, however. Hein said that what it comes down to is the Laker’s team speed, which he believes Lindenwood won’t be able to match.

“I think we’ll come out hard and take it to them with our speed,” said Hein. “They may be a physical team but when it comes to speed, speed kills, and they can’t keep up with us in that.”

GVSU’s DII club men’s hockey team plays next at home at Georgetown Ice Arena on Oct. 26 at 8 p.m. against Lindenwood University-Belleville. The Lakers are 5-1 in their last six matchups against the Lindenwood-Belleville Lynx.