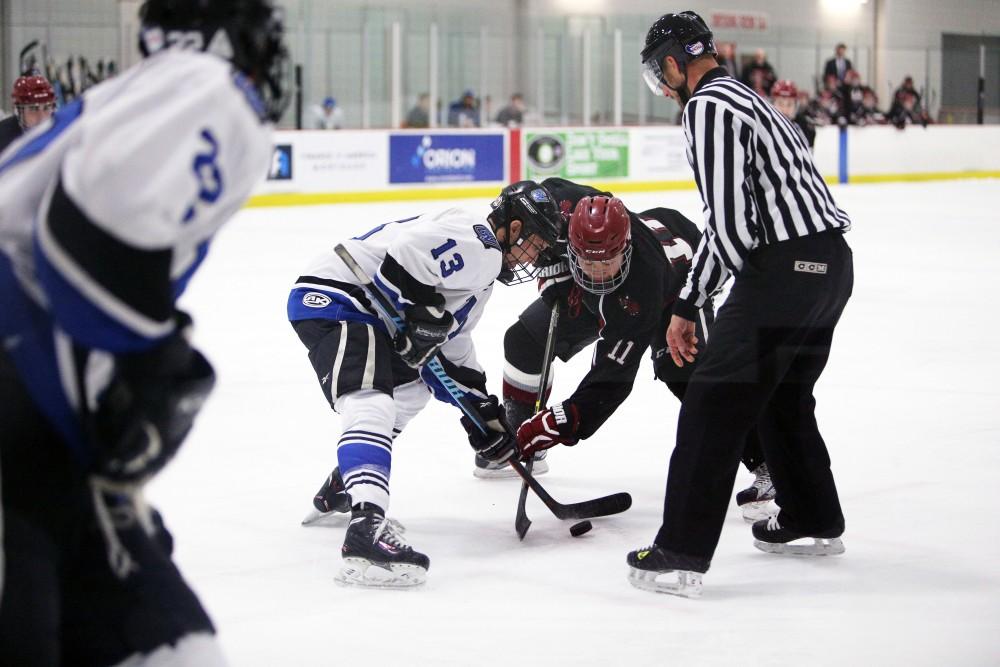 The Grand Valley State men’s ice hockey (Division II) team is ready to start the 2016 season, and is a team that seems to be getting better every year.

Over the summer, players had the opportunity to go to two weekend training camps. Then tryouts are based off of two weeks of six skate sessions. Now, the team has been practicing together for a month.

With a long, grueling season ahead of them starting in October and going until March, there isn’t much rest for this team.

“We really don’t have too many weekends off and even when we do, because of our success in the past few years, teams get up to play against us,” said GVSU coach Mike Forbes. “We’ve made it to 10 consecutive national tournaments and everybody in Division II knows that, so we have a bull’s-eye on our back.”

The team consists of 15 returning players and eight rookies.

Each player offers some kind of skill to the team, ranging from speed to stick-handling.

“Everybody brings something different to the table when it comes to our team,” said Spencer Craig. “Not everyone is a goal scorer, not everyone is the fastest guy on the ice and not everyone plays the defensive zone as well as each other so the returning guys have a good mix of all that and no one or two guys are more important than the next.”

The team has a veteran defense with solid goalkeeping. Offensively, the team lost some of their top goal-scorers who graduated last year, but will rely on returners and the rookies to lead the charge.

For special teams, Troy Marrett said the team lost their top penalty kill unit, but with their veteran defense, they shouldn’t have any issues. Marrett also said the power play unit will be building off the success from last season.

For this season, a lot of teams GVSU will face are highly ranked. Lindenwood-Belleville, Lindenwood-St. Charles, Miami University and Michigan State are all tough opponents on the schedule. The team will also play Florida Gulf Coast, the defending champions, in January.

A lot can happen with a season as long as this, so challenges are bound to arise.

“A challenge I would expect to face is just like most teams, I believe, and that is keeping the intensity and the drive as the season wears on,” Craig said. “It’s a long haul and guys get tired and beat up. Being able to get up for games and practices and mix in homework and studying becomes a little more difficult, so being able to fight that off for seven months is a challenge.”

With the first game Friday Oct. 7, Forbes has yet to assign captain and assistant captain, yet many players will have leadership roles on the team.

A handful of players did not start college right out of high school, but rather went to play junior hockey. For sophomore Lucas Little, this was the case.

Little played in the North American Hockey League for the Port Huron Fighting Falcons and the Keystone Ice Miners.

Junior hockey prepared Little not only as a player, but as a person.

“Junior hockey helped me mature as a person which helped the transition to college much easier,” Little said. “I might have been a 21-year-old freshman, but I felt more confident and prepared in the classroom.”

Players coming from all different backgrounds is a strength the team looks to build off of.

“We have a lot of great characters in the room and together it’s a great atmosphere to be around,” Craig said. “We also are deep at all positions on the ice, which will make it tough for opposing teams to find success no matter who is in the lineup.”

The home-opener is against Rochester College Friday, Oct. 7 at Georgetown Ice Arena at 8 p.m.