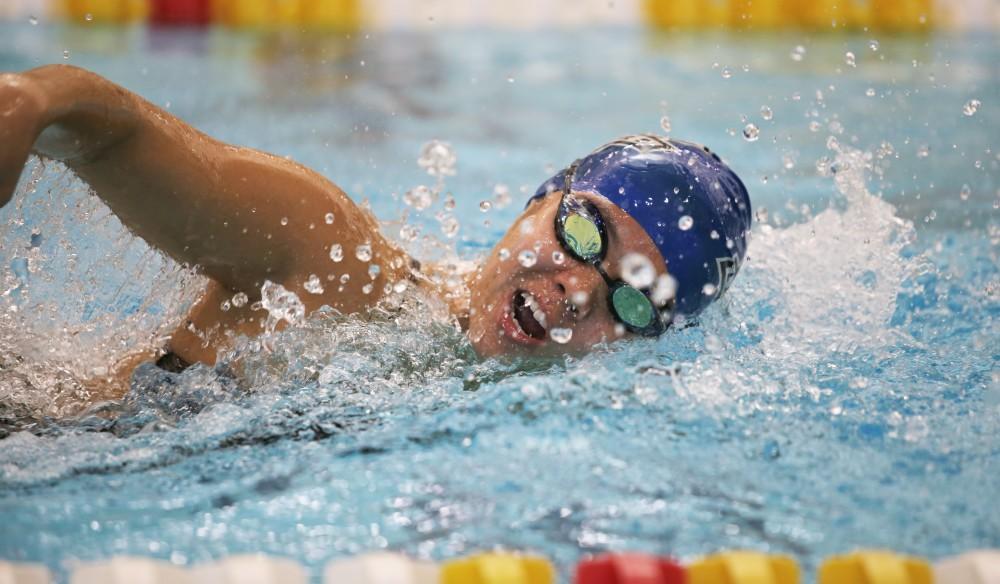 GVSU coach Andrew Boyce has never had a tie, but it was not a terrible result in his eyes.

“It’s kind of crazy that it comes down to a tie or even winning or losing by one point,” Boyce said. “I think it just shows how evenly matched the teams were.”

Freshman Samantha Postmus was ready to prove herself once again after two victories in her last meet at Calvin College. She had a great meet again for the Lakers, winning all three of her events. She set two pool records in the 1,000 freestyle (10:30.55) and the 200 IM (2:07.26).

Postmus showed serious tenacity and excelled in an event she wasn’t used to competing in.

Also a standout in the individual events was Gianni Ferrero, who won the 100 freestyle. He also set a pool record in the 100 backstroke (58.98).

“My 100 backstroke time was OK,” Ferrero said. “My 100 freestyle time, I was definitely not happy with it. I should have been faster, but in both of my events I had a lot of competition.”

Ferrero said the tie was a “perfect result” considering the circumstances of a tough practice schedule lately.

“We had a tough week of practice,” he said. “We’re all sore. We’re all broken down.”

“Very competitive meet,” Boyce said. “Lewis definitely has the strength. They pushed us and we pushed back.”

The Laker men sat ahead of Lewis in points before the last relay event. If the Lakers could have combined to place second and third or better, the relay teams would have locked in the win.

Boyce strategized to find the way to best get the win, distributing his best swimmers across the A and B teams to give them their best shot at avoiding a finish below third place.

“They have their superstars up top,” Boyce said. “We have a little more depth than them.”

Seeking two high places versus the overall relay win was the strategy to edge out Lewis, but the A and B teams took second and fourth to tie Lewis after the last event.

It was a neck-and-neck race, which was common the entire meet.

“It was really, really intense. Everybody was cheering,” said John Eber who competed in the final event. “Lewis really stepped up. They had a bunch of people really pushing us.”

His relay-mate, Ferrero, had mutual feelings after the meet.

“It was great to race fast swimmers,” he said. “I personally enjoyed having some really fast guys next to me and pushing me. Personally racing them, that was an awesome experience and I feel like most of the guys saw it that way.”

Lewis’ unique venue is without diving boards. Therefore, the dive team sat this one out, losing out on the potential points that could have perpetuated the Lakers to victory.

“We didn’t have our divers with us so that would have helped with some points,” Boyce said. “If we were at home it’d be a little bit of a different story.”

In the end it was more about friendly completion than a win.

“They’re really nice people,” Eber said. “Both of our teams are really friendly with each other, and we were just having a good time.”

The GVSU swimming and diving teams will have some time off before their next competition in nearly two weeks. They’ll depart to Marquette, Mich. for some Upper Peninsula action as the women face off against Northern Michigan University on November 15. At the same time, the men’s team will compete against St. Cloud State University.