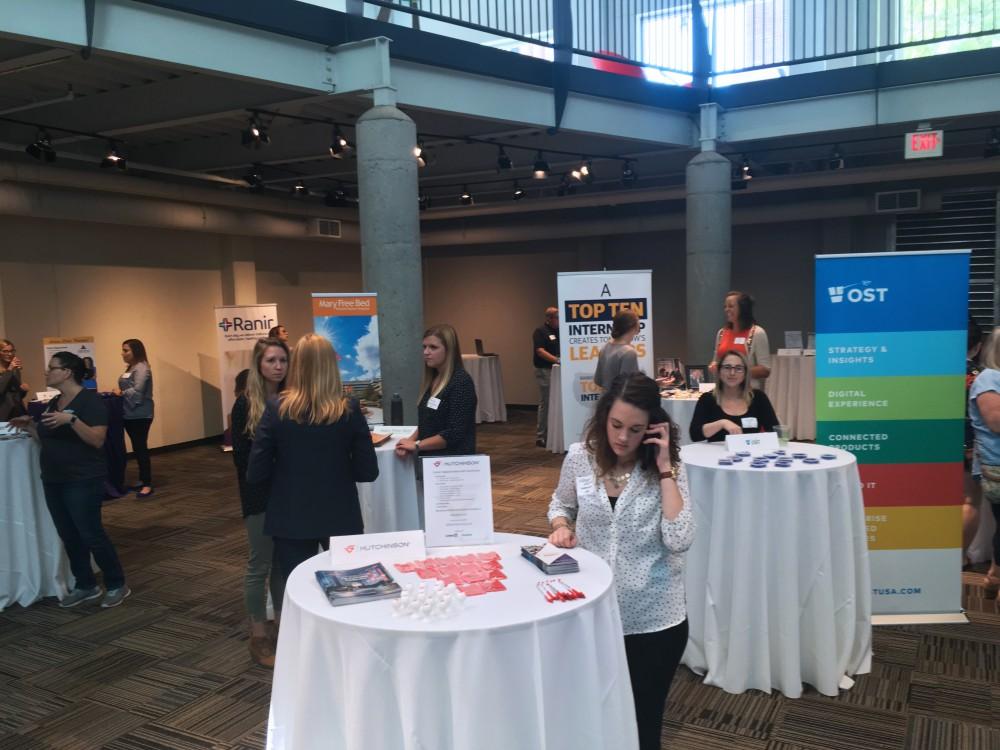 During the week of Sept. 10 to 16, Grand Rapids hosted the third annual GR College Week, an event aimed toward helping students from all colleges in the area connect with one another, discover job opportunities and become more familiar with the Grand Rapids area.

“This was actually Mayor Bliss’ idea,” said Rachel Bartels, Project Manager of Hello West Michigan. “[Bliss] said we have so many colleges here, we need to help [the students] get to know the city.”

GR College Week is a collaborative between all the area colleges, the city of Grand Rapids, the Mayor’s office and several nonprofits. This includes Hello West Michigan, an agency that helps Grand Rapids residents find or change jobs. Hello West Michigan hosted the GR Connect event, which Bartels describes as a job fair with a laid back atmosphere.

“We want to make sure students are aware of all the opportunities available with potential employers,” Bartels said. “It’s a little more informal than the big campus networking events, but that gives the employers here an opportunity to connect with students on a one-on-one level. We have 17 employers here today looking for entry-level talent.”

Dozens of students from community colleges met at Kendall College of Art and Design Friday afternoon to chat with employers in various fields.

“This event isn’t for any one major,” Bartels said. “These are all different companies looking to help students start their career and hire them into entry-level positions in everything from healthcare, IT, engineering, human resources, finance, production, manufacturing and more.”

Though GR College week is still a fairly new event, it’s expanded more each year. Bartels explained that the discounts at local businesses have the potential to create a positive economic impact and the various events help students learn to appreciate what’s available to them here.

“[Grand Rapids] is an amazing place for young people, we have a lot of the same amenities as a big city like Chicago, but you’d pay two or three times as much to live in and do things in Chicago that you would here,” Bartels said.

While events such as GR Connect and Wednesday night’s mixer at the New Holland Brewery saw a great turn out, some of the other College Week events didn’t have quite as many attendees.

The event “GR Respect: Being a Citizen of Grand Rapids” was designed to introduce college students to the services available to them from area nonprofits and various City of Grand Rapids departments. However, the event failed to generate an audience.

“We had exactly zero student attendees,” said Nathanael Karnes, Career Services and Enrollment Coordinator at Western Michigan University Cooley Law School. “We discussed what we could do next year to increase attendance at this sort of event.  We will probably use a different location next year, either a park, a brewery or a space on an undergraduate campus.  We also discussed merging this event with GR Connect.”

Several city-oriented entities were going to give out information on volunteer opportunities for students.

“We also had an immigration attorney and an attorney that practices landlord/tenant law and criminal defense that were going to talk to students about immigration issues, tenant rights, and Constitutional rights,” Karnes said.

Though no students were able to participate in this particular event, it’s not too late to get involved with volunteer opportunities in the Grand Rapids area or get help from any downtown agency if there are questions or concerns about living in the area.