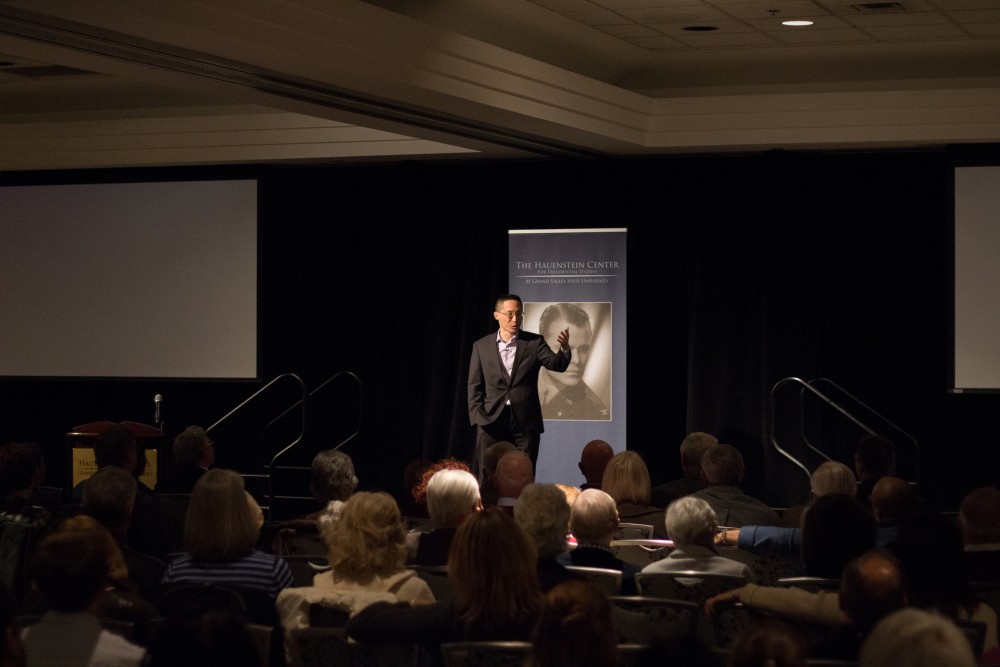 Eric Liu, author, columnist and CEO of Citizen University, captivated an audience at the L.V. Eberhard Center with his talk about citizenship and activism. He spoke at Grand Valley State University on Wednesday, March 14. His speech followed a simple formula: Power plus character is citizenship, or P + CH = CI.

“Citizen does not mean documentation in this context,” Liu said. “It is the broader ethical notion of being a member of the body, a contributor to the community.”

Liu was speaking at GVSU for the Wheelhouse Talks leadership lecture series as part of the Hauenstein Center for Presidential Studies’ Common Ground Initiative.

Liu delved into the importance of contributing to society. He believes that individuals have the power to create change by coming together. People often feel powerless because they think they themselves are just an everyday worker, Liu said. But, the true power comes from organizing, protesting and demonstrating.

“Black Lives Matter was a movement started a few years ago,” Liu said. “Structural inequities in the criminal justice systems were brought to national leaders. We had accepted it (as the) normal order of things as a society. Some people had accepted that roughing up a few black kids is a justifiable narrative. Others let the narrative flow past them without objection.

“The movement has arisen from the bottom up, and citizens of the United States have changed how the state treats individuals, equal protection of laws and created a lot of controversy. This changed the story of what we are doing in the country and the ways that we do and do not value black life.”

It isn’t about your political stance, Liu said, but rather about the ability to organize, start conversations and create change. The students of Marjory Stoneman Douglas High School are an example of this, Liu said. He explained that regardless of your view of guns, these students were able to come together to create conversations nationally.

Character is not an individual virtue, Liu said, but instead it’s character in collective values that make us pro social workers in a community. He continued saying that it isn’t about individuals but rather about the greater common good.

Liu passionately spoke about the effect of contagion. Human beings can either choose to make each other mad and furious or compassionate and humble, Liu said. Everyone has the power to cascade compassion, courtesy and kindness.

Liu said that at this time, we are called in a civic and religious sense to live up to the principles of republic. He quoted Benjamin Franklin after the Constitutional Convention of 1787 when someone asked Franklin what they had created: “A Republic, if you can keep it.”

“This is a time for us to show up in a new way with each other to convert reflection into action,” Liu said. “When we do that, we are truly going to make America great again.”