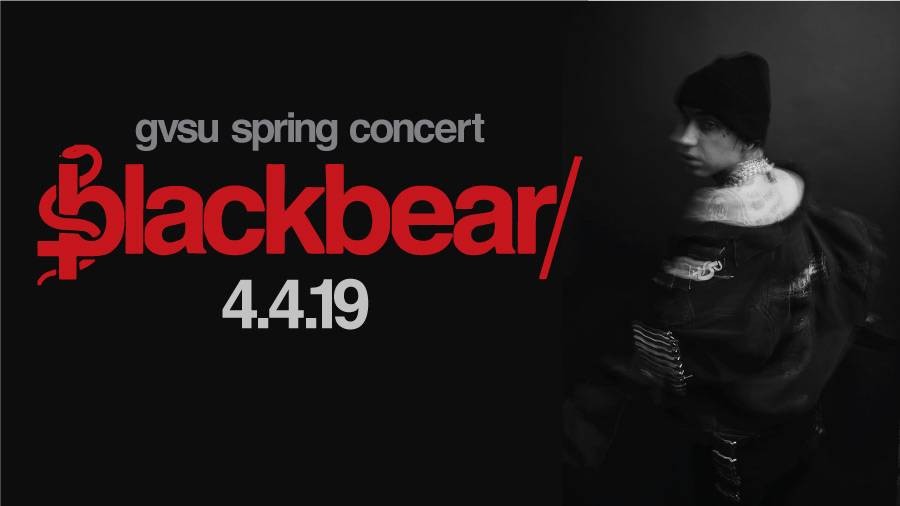 Rapper and R&B artist Matthew Musto, known by his stage name Blackbear, will perform at Grand Valley State University’s Fieldhouse Arena on April 4 as part of this year’s spring concert. Andre Power, DJ and co-creator of music label Soulection, will open for Musto.

Two surveys were sent out in fall 2018 by the Campus Activities Board (CAB) to decide on a performer for the event. The first survey intended to gauge student music preferences and the second let students vote on the artist they would most like to see, where Musto received the most votes. Event organizer Kalie Tomlinson said that it is rare to book the campus’ first choice.

“We’re not usually lucky enough to get our top-choice artist, but I’m really happy that we did this year. I think people are going to have a really great time,” Tomlinson said.

Fieldhouse Arena will provide a more intimate setting for the concert compared to larger venues that Musto usually plays, which Tomlinson said CAB took into consideration. Tomlinson also said the timing of the concert serves to ease end-of-semester stress that many students face.

“It’s right before finals, so it’s a good way to kind of let loose and have a little bit of fun before you have to buckle down for the end of the semester,” Tomlinson said.

After pursuing a music career through high school, where he co-wrote and produced songs, Musto released his first full-length album Deadroses in 2015. He co-wrote Justin Bieber’s “Boyfriend” and has collaborated with Childish Gambino, G-Easy, Machine Gun Kelly and other popular artists.

Musto toured with Fall Out Boy in 2017 before the release of his latest album Cybersex, which topped at 47 on the US Billboard 200. To generate interest in his upcoming album, ANONYMOUS, Musto has released one song per week starting in February and will end on the album’s release date, April 19.

Doors to the venue open at 7 p.m. and the concert begins at 8 p.m. Tickets are $10 for students and $25 for public. Tickets are still available online and at the box office.