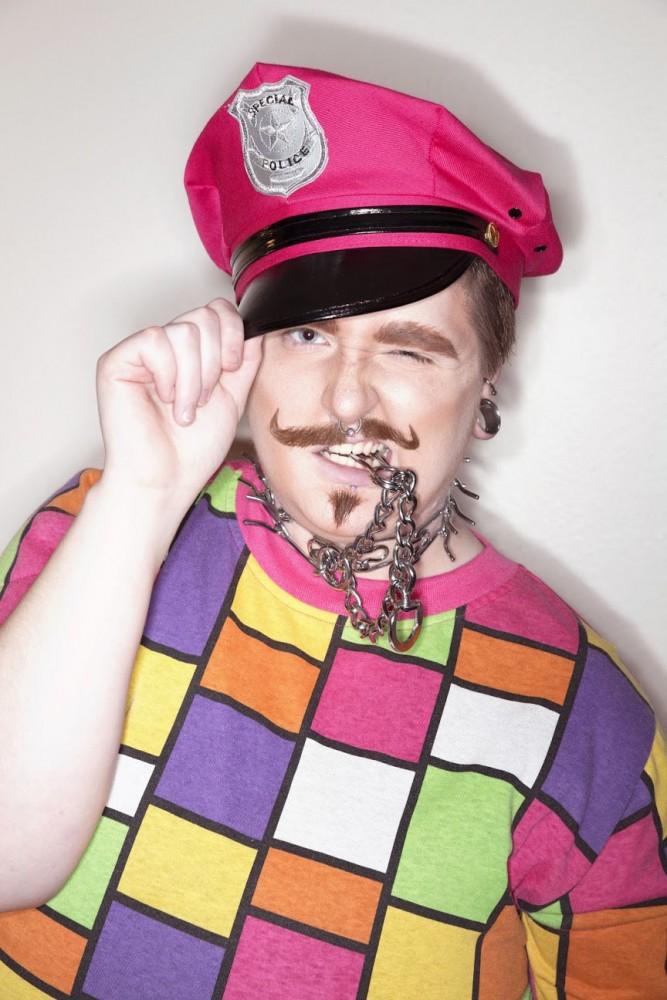 Grand Valley State University senior siblings Kaylee and Rachel Britton are bound together by a passion for all things art and a love of drag. In an effort to spread awareness, entertainment and creativity to students across campus, the two have collaborated on an exhibition.

“Art is a Drag,” will be open to the public Monday, Feb. 6 in the Stuart B. and Barbara H. Padnos Art and Design Student Gallery in the Calder Art Center on the Allendale Campus.

The exhibition will feature a day-long series of events held Tuesday, Feb. 14 from 11 a.m. to 10 p.m. in the Calder Arts Center intended to educate others on the history of drag and provide a one-of-a-kind outlet for artists of all trades to unleash their own creativity.

Kaylee Britton has been dabbling in drag for over a year and sought a way to combine her illustration background with drag. Through the use of makeup, Kaylee Britton is able to transform herself, and other individuals interested in drag, into confident, colorful and unique works of art.

“I’m a lover of drag queens, so for me, it was like how I can apply my two careers–my love for drag and being a drag queen with fine art and illustration,” Kaylee Britton said.

Rachel Britton is also no stranger to the world of drag. Not only have they been supportive toward Kaylee Britton throughout her drag career, Rachel Britton has also photographed many drag shows. Though they have not performed drag officially yet, Rachel Britton plans on making their debut at the event.

“(Drag) is just another form of art, but people who don’t know about it assume things that aren’t (true),” Rachel Britton said.

The event series will kick off with a discussion from 11 a.m. to noon facilitated by Jae Basiliere, assistant professor of women, gender and sexuality studies at GVSU, highlighting the history of drag, the LGBT+ community and research on drag kings.

Following the presentation, a screening of the film “Paris is Burning” will take place from noon to 2 p.m. along with a question and answer session led by Kaylee and Rachel Britton

From 2 p.m. to 5 p.m., attendees will have a chance watch the four drag performers, Salem Massacre, Jack Dup, Ginger Ambrosia and Beeka Darwin apply their transformative makeup and create their characters as they prepare for their evening performances. Guests will also have an opportunity to speak with the performers about how drag intersects with activism, art, photography and academia.

What sets this event apart from other drag show performances is an interactive element unveiled after the show. A life-drawing session will be held from 7 p.m. to 8 p.m. providing an outlet for those interested in art to sketch the performers as they pose in character.

“(In life-drawing) you have your standard models, and they are all around the same build and the same size, and it would be cool to have us performers, after the show, to do a life-drawing (session),” Kaylee Britton said. “A lot of us are putting foam on our bodies, building up our bodies and cinching our waists; we’re sort of sculpting our bodies and building unique body shapes.

“I just thought it would be cool to bring in a body-positive aspect to the performers and to life-drawing in general.”

To conclude the evening, an open-mic opportunity will take place from 8 p.m. to 10 p.m., allowing all participants to showcase their talents.

This event is designed to provide a deeper understanding of drag and associate it with art in an out-of-the-box way. Both Kaylee and Rachel Britton aim to bring artists from all areas of expertise together in a supportive, productive and entertaining way in the hope of sparking inspiration to create artwork geared more toward diversity.

“I hope people will see that practice makes perfect–to be cliche–but also see that anyone can do drag if they really wanted to,” Rachel Britton said.

More than anything, Kaylee and Rachel Britton just want to create a fun, safe and supportive atmosphere that invites in people of all backgrounds, genders and communities as well as many different departments on campus. This event is largely geared toward encouraging unity and correcting any stigmas associated with drag.

The exhibition will be open until Friday, Feb. 17.