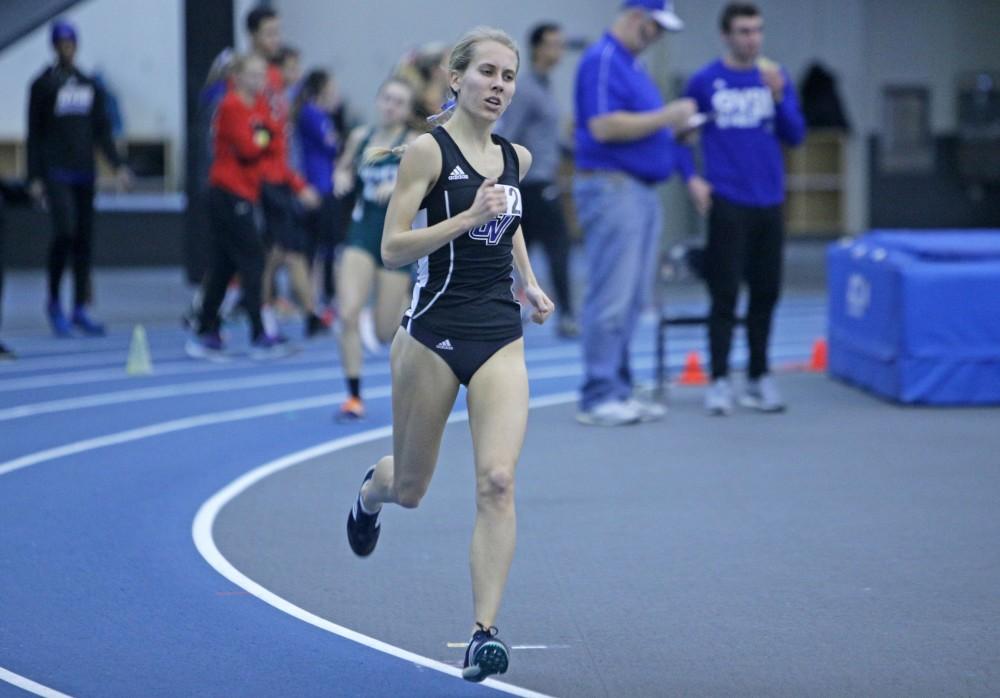 In the seventh grade, a friend of Kelly Haubert’s talked her into doing cross country. Haubert, originally from Liberty Center, Ohio, said cross country only had five athletes total between middle school and high school.

The program was actually going to be eliminated, and Haubert’s friend, who ended up being her boyfriend going on six years now, then convinced her to do track and field in the spring, which she decided to do as well.

By Haubert’s freshman year of high school, a new coach came in, begged to take over the program so it wouldn’t be eliminated and recruited 16 girls who led them to state championships in Haubert’s junior and senior years.

“He wrote me a handwritten letter,” Haubert said. “It said that we (GVSU) have also been a part of our first win and we would love for you to be a part of our future wins. Even though I had never really heard of Grand Valley, it really struck me.”

Haubert eventually came up to GVSU for a visit, and that one visit made up her mind. However, the transition from high school to college was a little harder than she had anticipated in her first year.

Haubert believes a turning point in her GVSU career was in her true freshman year at the Spartan Invitational, when she finished dead last on the team. After being last, she told herself that she never wanted something embarrassing like that to happen again.

“Every summer and season since I always try to do a little more,” Haubert said. “I’m always working on an area that I’m maybe struggling with. Working on the little things has really evolved me into the runner I am today.”

Baltes is very proud of the runner Haubert has become.

“She’s been a work-in-progress over the course of her career,” Baltes said. “Her main positive qualities are work ethic and her determination to stay focused and get the job done. She’s someone that came in who wasn’t super high on our depth chart and slowly progressed each year to the point that last year she was a key contributor in winning the national championship in the fall.”

One of Haubert’s biggest individual accolades was when she had a big breakthrough in the 10,000-meter last spring at the Bucknell meet. Haubert placed third with a time of 34:58.98 and qualified for the NCAA Championships because of that.

“She brings a good balance between being a positive teammate while still being able to be a leader that holds her teammates accountable,” Baltes said.

Baltes refers to Haubert as one of the backbones of the group, with her and Stacy Metzger leading the main pack, being the catalysts with Kendra Foley up front, and setting the tone and leading races, while Haubert and Metzger always established the pace for the rest of the group.

Haubert redshirted her first year at GVSU and could have graduated this year with her accounting degree, but she is coming back to get a second degree and finish up the 150 credits needed to get her CPA. This upcoming year will be her final year at GVSU.

“I’m a very faith-based person,” Haubert said. “I very firmly believe everything that’s happened to me was planned, and I have a purpose for my life that’s bigger than I anticipated. I think this is just one of the ways, through running, that’s been shown to me.

I’ve made wonderful friends, I have a wonderful boyfriend and I went to a great school, all because of running.”