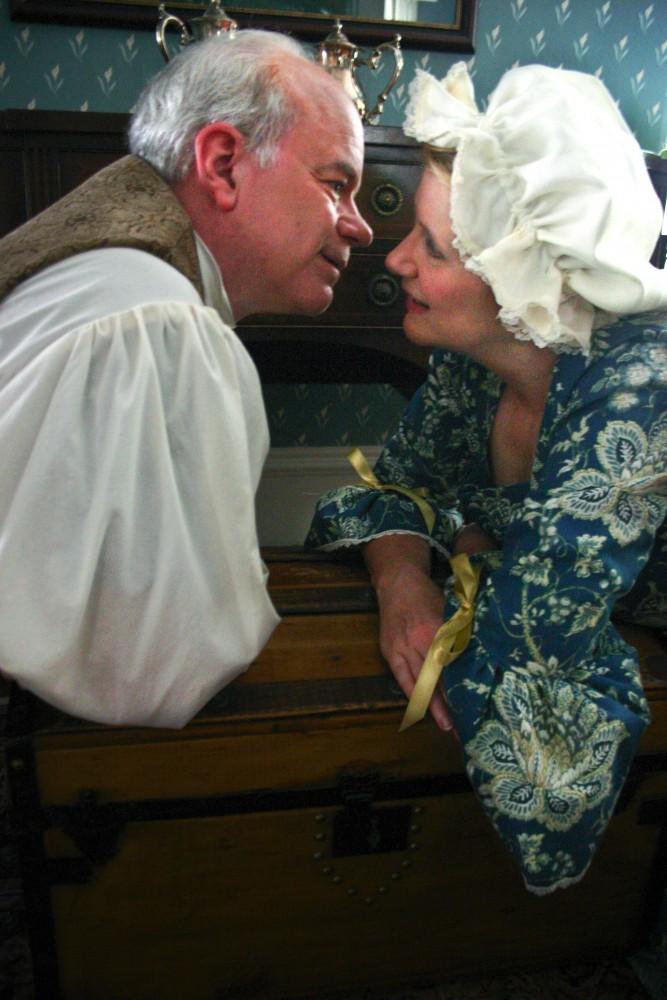 Grand Rapids spouses will travel eras on the stage to portray the relationship of a founding father and first lady in a local production of “My Dearest Friend.”

The production, a two-character play about the relationship of John and Abigail Adams, opens Nov. 11 at 8 p.m. Tickets cost $15 for adults and $8 for students and seniors.

The play runs through Nov. 13 at the Dog Story Theater in downtown Grand Rapids.

The play is based on John’s memories of Abigail shortly after her death, ranging from the courtship of the characters in their ’20s to their stint in the White House. The wide time frame forces the only two actors in the play, married couple Mary Beth Quillin and Gary E. Mitchell, to branch their characterizations across age definitions.

Quillin, a Grand Valley State University alumna, and Mitchell founded GEM Theatrics to produce 2-character shows they could be in together, partly because they wanted to spend more time together but also because of their on-stage compatibility.

“We work the same way and we know what to expect from each other,” Mitchell said. “We don’t have to agonize over every decision.”

“My Dearest Friend” focuses less on the historical events of the American Revolution and more about the relationship between John and Abigail known through the frequent letter correspondence kept between them during that time.

“Their relationship is a prism through which we can come to understand more fully the history of our country’s beginnings,” Quillin said. “And perhaps put John Adams’ place in history in context.”

Mitchell said the life of John Adams has always appealed to him.

“He’s the underdog who accomplishes great things,” he said. “He was short, fat, loud, tactless, obnoxious and disliked, but more than anything else he had a vision of what America could be and worked tirelessly to achieve independence for our nation.”

John Adams’ propensity to convey some less-than-darling traits created a challenge for Mitchell.

“We all like to be liked,” he said. “And John Adams was not always the most likable of men.”

Quillin said she admires her character Abigail because she was not the typical first lady of the age.

“Abigail was an incredibly strong woman — physically, emotionally and intellectually,” she said. “Her views on equal rights for women and her strong anti-slavery stance are the two most striking things about her that draw me to her as a person.”

For more information about showtimes or to buy tickets, visit www.dogstorytheater.com.