Getting hands-on with history 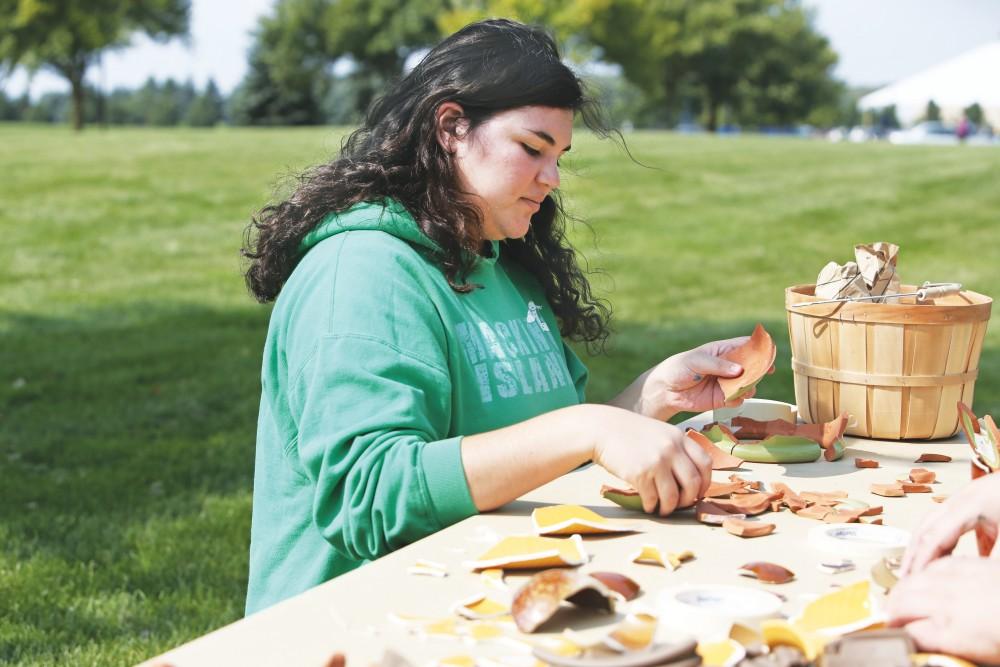 History is often taught through textbooks and museums, but during the Paleo-Olympic Games, history is taught through demonstration and interaction. Bringing medieval rugby, Roman religious practices, archery and more to Grand Valley State University, the Paleo-Olympics is an annual tradition that allows students to participate and learn about history in an engaging way.

“In class, your professor might show you a couple of things or tell you about a couple of things,” said Cherilynn Brooks, an anthropology student at GVSU. “But here (at the games) you actually get to touch it and feel it and try it, and ask your own questions. It’s a fun way to both learn and interact with things.”

The Paleo-Olympics event was held for the seventh straight year on Sept. 18 on the lawn outside of the Mary Idema Pew Library. The games are organized by the archaeological society, the classics society, the Theta history club and the anthropology club with the assistance of associate professor Melissa Morison.

“The focus is on interdisciplinary collaboration,” Morison said. “Students from several different majors and (student organizations) all work together collaboratively to pull off the event, which gets bigger and more fun every year.”

One of the new events at the games this year was the demonstration of a Roman religious practice run by visiting assistant professor Charles Ham. During the demonstration, Ham observed the behavior of chickens as food was sprinkled around them. The chicken’s reaction to the food would answer a question provided by the audience. If the chickens ate the food right away, then the outcome would be favorable. If the chickens did not eat the food, the outcome would be unfavorable.

Based on audience suggestion, the demonstration was performed to see if Donald Trump would become president of the U.S. in 2016. The faculty running the demonstration determined that the chickens ate the food.

Assistant professor Chris Shaffer presented on archery at the Paleo-Olympics. Bringing out a variety of arrows and bows, Shaffer taught students about the different cultures and animals for which each bow and arrow would be used.

“We see in many cultures, they put themselves into their arrows,” Shaffer said. “It’s a form of identity, whether it be individual identity or group identity. In Amazonia you can always tell which cultural group made the arrows if you know the specific types of fletching, what feathers they use, how they tie the feathers.”

After the demonstration, students were able to try shooting on one of the bows themselves.

“I think it’s interesting that some of the bows that are used for the same animal are so different,” Brooks said. “People thought of different ways to be able to target the same animal and thinking of an idea.”

Shaffer said the demonstration at the Paleo-Olympics allows him to share the things he studies with students.

“It’s just fun, anytime that I can bring one of the things that I study and be able to talk about what I do and get people as excited about it as I am,” Shaffer said. “One of the reasons that we go into research is that we are so interested in these topics, so to get other people equally as interested is what I live for.”

In addition to archery and predictions for the future, participants in the Paleo-Olympics had the chance to participate in medieval rugby. The game represents a game played in the medieval period in which two adjacent villages would place a ball between them and each village would race to get the ball and bring it inside the other village’s church.

“In the medieval period you could smack people, you could knife them, you could throw rats at them,” Morison said. “We play an easier version where you just have flagging tape around your waist and if somebody pulls your flag off then you’re dead.”

For Morison, the Paleo-Olympics are a fun way to bring students out to enjoy history.

“I like seeing all the students coming out and having a really good time together,” Morison said. “It’s seeing these people, who are all different kinds of majors, but they’re all interested in some aspect of history or the past and they all just kind of come and have some fun together.”