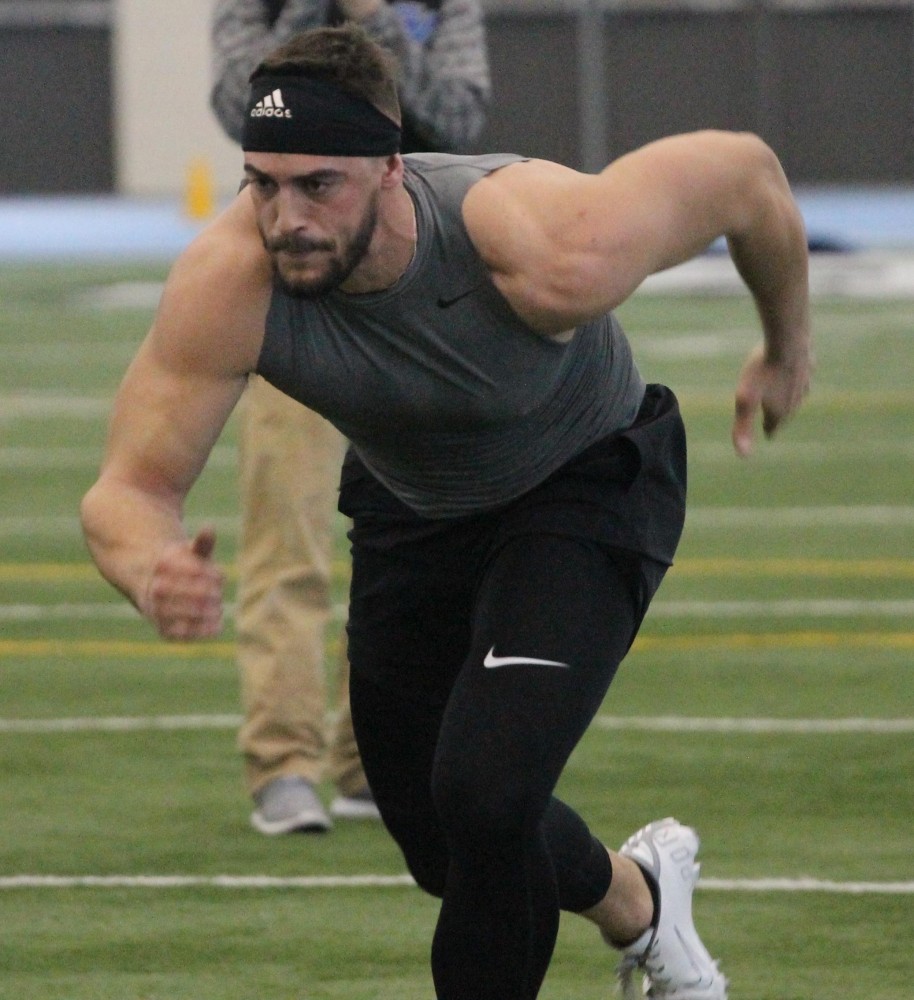 Every kid that grew up playing football in the backyard with their friends dreamed of playing in the National Football League (NFL) one day, and that dream became a reality for former Grand Valley State University linebacker Dylan Carroll, who signed with the Chicago Bears Saturday, April 27.

“Ever since I can remember, it has been a dream of mine to play in the NFL,” said Carroll. “I remember playing backyard football with my friends and neighbors, growing up pretending we were NFL players and an NFL team. I attended a Detroit Lions game when I was 8 years old and told my dad that was going to be me out there one day.”

It’s not an exaggeration to say that April 27 was the longest day of Carroll’s life, as he sat by the phone all day with his family while watching the NFL draft, hoping to hear his name get called. He was saddened to see his name not get called throughout the seven rounds, but all that sadness went away when he heard multiple NFL teams reach out.

“The Oakland Raiders’ defensive line coach called and I accepted, and then as I hung up the phone, the Chicago Bears called, I accepted, then the Detroit Lions,” Carroll said. “My agent and I made the best choice that fit me, as well as looked at depth charts, and that was for me to go to the Chicago Bears. I mean what’s a better place to go to than the No. 1 defense in the NFL and get to learn from the greatest player at my position in Khalil Mack.”

Carroll, who racked up 164 tackles, 33 tackles for loss and 15 sacks with the Lakers, credits the GVSU staff for getting him to where he is today, as well as the trainers at Total Sports Performance.

”I started my pro day training in Wixom, Michigan at Total Sports Performance the first week of January. I had an awesome time down there and was able to train with some great guys, many of whom have made a mini camp with a team or have signed as a free agent,” Carroll said. “Jim Kielbaso, the head trainer in Wixom, got us ready for pro day so we could perform our best. Also, credit to the Grand Valley coaches and our strength program for getting me where I am today and for getting me NFL ready. I drive to Wixom two times a week to train and drive to Grand Valley four times a week to train. Big shoutout to Coach Rodenburg for working me out whenever I came to Grand Valley to train. “

Carroll was overcome with emotion after his call with the Bears, as he was able to embrace his parents, grandparents and siblings surrounding him in support. In addition to a phenomenal support system at home, Carroll has a long list of people he’d like to thank for getting him to where he is today.

“My time at GV has prepared me for the opportunity ahead. I’ve played a lot of football and have had some of the best coaches in the game of football who have really helped prepare me for this moment,” Carroll said. “From the head coach Matt Mitchell to the assistants, my three defensive line coaches I’ve had throughout my career — Coach Yoches, Coach Witlow and Coach Bibbs — and to the strength coaches to the trainers.”

“Grand Valley Football is a prestigious college football program and our competition is competitive,” Carroll said. “It’s a surreal feeling. I have really appreciated all my friends, family and teammates who have reached out to congratulate me.”

Carroll flew out to Chicago Thursday, May 2 for the rookie mini-camp, where he continues to for his life to make the final 53-man roster.