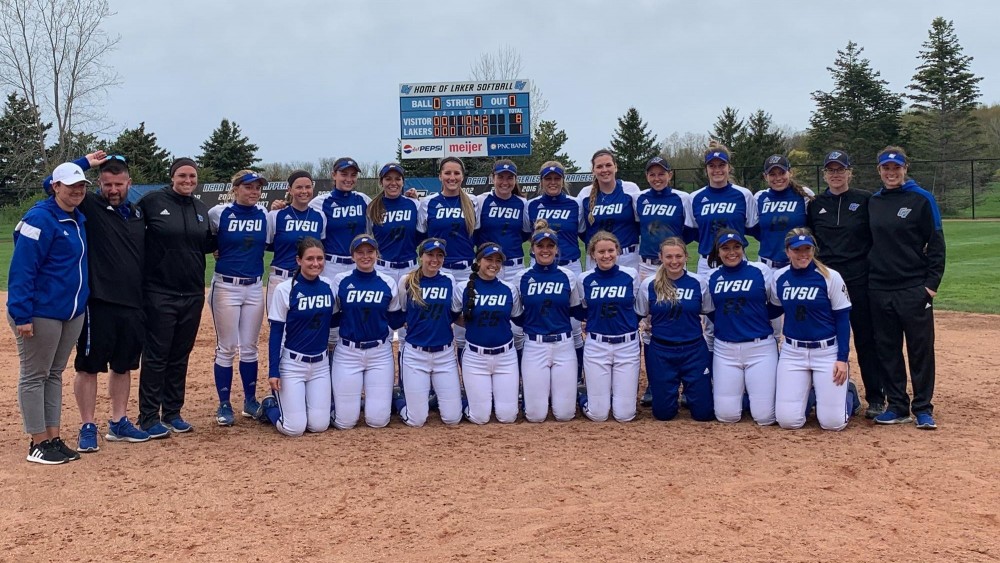 The No. 1 seeded Grand Valley State softball team continue to dominate, as they were able to beat No. 4 Southern Indiana in the NCAA Midwest Region Tournament final on Saturday, May 11, as the Lakers defeated the Screaming Eagles 8-1.

In a duel that remained close throughout the first four innings, the fifth and sixth innings were what ultimately decided the game, as D2CCA Midwest Region Pitcher of the Year Allison Lipovsky recorded two outs with the bases loaded as the Laker offense exploded for four runs in the following inning to ensure that the Midwest Regional Title stayed in Allendale.

Taylor Rieger got the scoring started for the Lakers in the third inning with a single, prior to Nikola Holmen hitting a dinger to right center. Two singles from Bailey Thatcher and singles from Shannon Flaherty and Brooke Henning put the Screaming Eagles in a deep hole that they could never climb out of.

Lipovsky was proud of the complete game she pitched, only giving up eight hits and one earned run while recording eleven strikeouts, but she was most proud of the energy provided by the team, as they were dialed in for the entire contest.

“Keeping the energy was key,” Lipovsky said. “We’re on the fence screaming and yelling and having those big defensive plays, which I have all the confidence in the world that my teammates will field for me. The energy in the dugout is one of the most important things, because that means everyone’s in the game and everybody is going after every single play on the field.”

Head coach Dana Callihan reiterated Lipovsky’s point about the energy on and off the field, which has been key to every Laker victory this season.

“It just means that everyone is in the game,” Callihan said. “As long as the energy is positive, that’s what we need.”

Winning this Midwest Regional and also claiming the GLIAC regular season title were not certainties earlier in the season, as Callihan cites a key doubleheader Saturday, April 13, that could possibly end up defining this season.

“That week that we went 3-3 and we lost two games to Davenport woke us up a little bit,” Callihan said. “We had to play all three facets of the game every single inning, as they realized we have to play well all the time.”

Since those Davenport losses, GVSU has won 18 of their past 19, claiming victory in their past 13 matches, including the past seven matches in the GLIAC tournament and Midwest Regional, where they outscored their opponents 46-7.

Callihan had five goals for her team at the beginning of this season, and the third of those goals was accomplished with victories this past weekend, with more goals ahead as the Lakers keep winning.

“We’ve played very, very well lately, and every player has been dialed in,” Callihan said. “We achieved goal No. 1 by winning the regular season, and hit goal No. 2 with the GLIAC tourney win.”

Winning this Midwest Regional was goal No. 3 for GVSU, as they will advance to the Super Regional next weekend, which the Lakers will host. Winning that regional would be goal No. 4, as the team looks to pursue goal No. 5: winning the DII National Championship two weeks from now in Denver, Colorado.