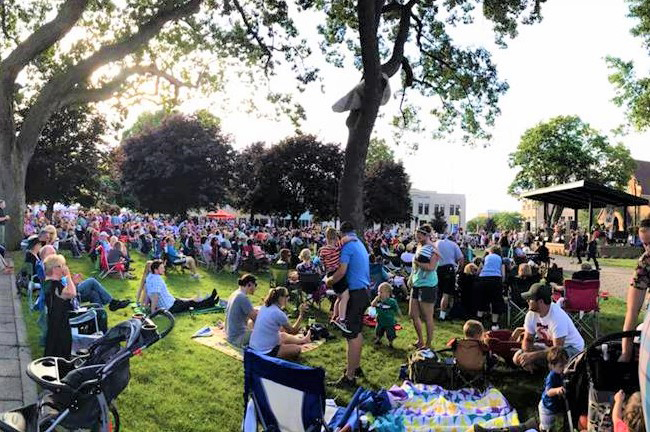 Courtesy / localspins.com Kicking Off in June: Muskegon’s Parties in the Park is just one of several community concert series across West Michigan.

East Grand Rapids Parks and Recreation and Consumers Credit Union are collaborating this summer to liven up Monday nights in the city with their summer concert series.

For six Monday nights during June and July, local bands will perform in John Collins Park from 7-8:30 p.m.  Along with the free night of family-friendly entertainment, the sponsoring bank will provide special treats at several of the concerts, including root beer floats on one of the nights.

Leisure supervisor Pam Slater said the night offers a relaxing environment for people to spend time together and enjoy the outdoors.

“The bands aren’t overwhelming, so you can still hold a conversation unless you’re sitting right in the front,” Slater said.

Slater said she encourages people to bring blankets and chairs so everyone can comfortably enjoy the night. As the band plays, Slater said she often sees people play cards, throw around a football and spend time with friends and family.

While organizers encourage bringing outside food and activities to the event, alcohol, grilling and open fires are prohibited in John Collins Park.

In addition to family and friend groups, Slater said these events are common for neighborhoods, retirement communities and other facilities to meet up and join the fun.

“We see little kids up on stage dancing, but we also often see big kids up there dancing too,” Slater said.

Slater said they wanted to get a variety of genres of music. This year, Concerts in the Park will feature jazz, big band, folk and more. She said the age groups in attendance varies depending on the evening and the style of music.

Kicking off the concert series on June 10 will be West Michigan’s JMM Jazz, covering hits from the Rat Pack era and other jazz standards. Typically ranging from a full ten-piece band to a trio, JMM Jazz can be found playing every Thursday Night at Noto’s Old World Italian in Grand Rapids, as well as other local venues.

Following JMM Jazz’s night in the park, the Grand Rapids-based Matt Gabriel Trio will be moving the audience to folk and blues on June 17. In addition to the Concerts in the Park series, they will be touring Michigan and Ontario this summer.  Matt Gabriel’s new album, Earth Tones, can be streamed on most major streaming apps.

Rounding out the performances for the month on June 24, the Calder City Band will take the stage. This concert band is composed of retired musicians and volunteers who perform around the Grand Rapids area at schools, senior communities and public events.

In addition to the Concerts in the Park, East Grand Rapids Parks and Recreation will also be holding The Brouwers Agency Movies in the Park, sponsored by Auto-Owners Insurance. For four Fridays this summer, movie musicals will be screened at dusk in John Collins Park. More information on this event and other East Grand Rapids Parks and Recreation events this summer can be found at eastgr.org.