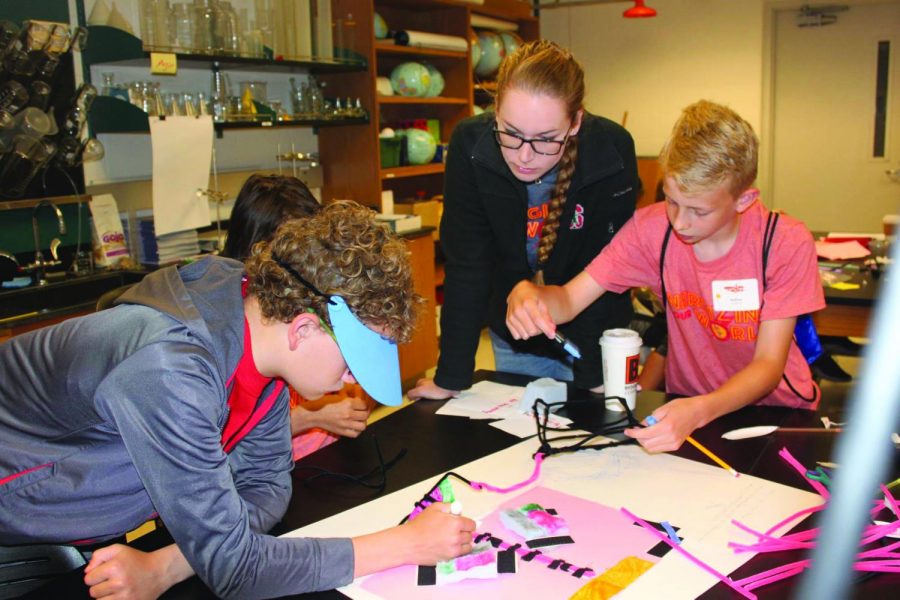 Shorouq Almallah, director of the Richard M. and Helen DeVos Center for Entrepreneurship and Innovation, considers it important to start early with creating a healthy ecosystem for entrepreneurs to start their pursuits. This means introducing the entrepreneurial mindset to teens before they graduate high school.

“What I love about working with high school students (is that) they have the creative mindset,” Almallah said. “They’re open to ideas.”

After all, Almallah described high school students as unafraid to take risks since they do not see barriers toward their endeavors. Adults face obligations that can make entrepreneurship difficult to pursue, including raising families. Therefore, she considered teens as having the time and resources for entrepreneurial involvement.

Being an entrepreneur means more than owning businesses; it entails solving problems through sustainable solutions. TESA 2019 focused on poverty and inequity, and as Almallah said, there is still room to address such issues in Grand Rapids.

She noted how some people refer to “A Tale of Two Cities.” Parts of Grand Rapids prosper in access to resources. However, other communities face shortages in such necessities as job opportunities and quality education.

“We utilize the design thinking methodology,” Almallah said. “We focus on helping the students understand, you know, the theme or the topic for the camp.”

The week of Monday, June 24 initially saw TESA students roleplay in a poverty simulation overseen by Access of West Michigan. Their roles included a variety of tasks and constraints. Almallah recalled how students learned what it felt like to not have cars, specifically for traveling to job interviews or grocery stores.

Tim Syfert, GVSU clinical faculty and TESA instructor, identified other conditions within the simulation. He mentioned at least one student roleplayed as someone vulnerable to a drug dealer. Some students carried bus passes while others did not.

As a TESA participant, Grand Rapids Prep student Ejuan Merritt explained he could relate to the simulation because he had previous experience with poverty. He lived without much income as a young child. From there, Merritt recalled being evicted from houses and moving into shelters.

“It was kind of like, I had been through that before, so I knew how it was,” Merritt said.

After going through the poverty simulation, students identified a main problem from which to propose a concept for new products or services. In the process, they worked with student mentors and faculty to develop business plans via market research. Key questions included identifying customers and an industry’s conditions.

“We needed to look into civil engineering, if there’s a demand for jobs there, which there was,” Nagpal said.

Nagpal worked in the Pink Team to pitch Gear Up. This idea proposed training youth ages 16 through 26 for civil engineering, including fixing roads. She also said the Pink Team researched the market size for Gear Up, with a sizable market provided if many teens lived in poverty.

A big problem for Pink Team was how to generate money. Asking people in poverty to pay would risk them losing incentive in Gear Up, Nagpal said. However, Pink Team eventually figured out Gear Up could receive government funding by bringing more individuals into the program.

Come Friday, June 28, TESA teams presented their ideas before judges, competing for cash prizes totaling $5,000. However, the benefits of TESA extend beyond finances. Nagpal mentioned TESA as a worthwhile learning experience, as she developed skills that included setting financial plans and working with people she did not know. For Merritt, he realized the challenges of being an entrepreneur.