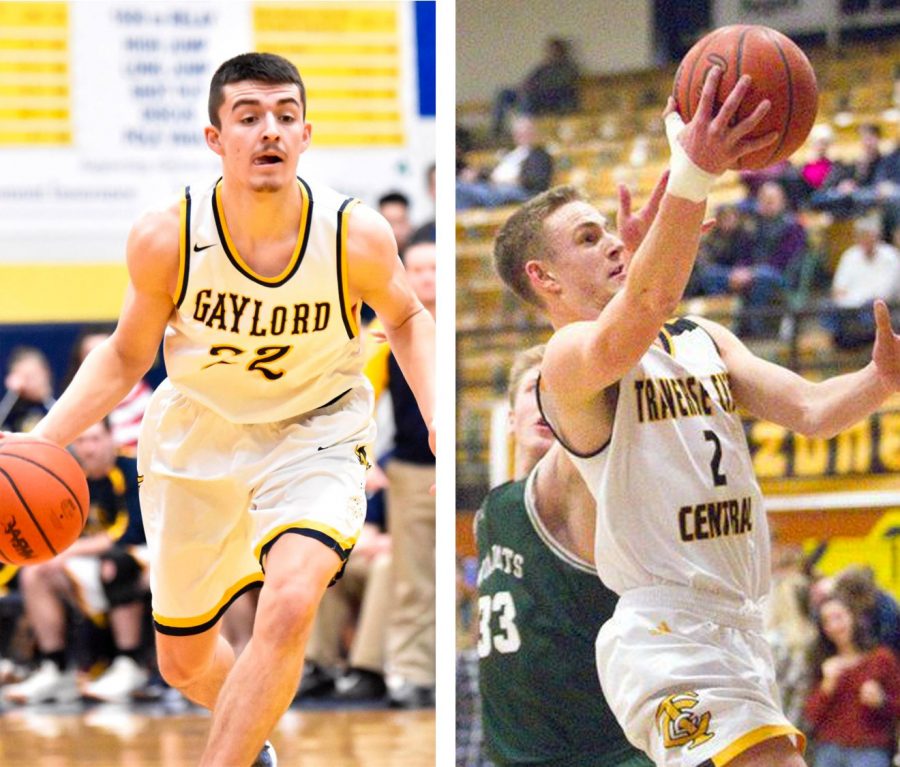 The Grand Valley State basketball team will look a lot different this upcoming season thanks to a talented incoming freshmen class headlined by three players from the northern part of Michigan.

Earlier this year, GVSU beat out northern GLIAC rivals such as Michigan Tech and Northern Michigan and locked down Marius Grazilus from Marquette, Blake Charboneau from Gaylord, and Tobin Schwannecke from Traverse City.

Assistant coach Taylor Johnson knew he had to have Grazilus and Charboneau in the Laker blue when he saw them play each other in high school on a trip up North to play NMU.

“I go up there to watch Marius play in that big game, and he was matched up with Blake,” Johnson said. “They both played well, and after the game, I asked Marius about Blake, and he said ‘Yeah, we should get Blake.’ These are some tough up-north kids, and after we got Blake down on a visit, we knew that this is where we wanted to go.”

Johnson went on to mention that a lot of players from the North play with an uncomparable tenacity, partly because they want to head to the lower part of the state to play tougher competition.

“When it comes to playing basketball, they take a little more pride in it,” Johnson said. “They relish in it more, because it’s a great chance for them to be inside and be at a level to get down state. That’s the dream for all U.P. players, to get to the Breslin and representing the forgotten part of the state.”

Grazilus, a 6’11” post with good footwork and a decent three point shot, agreed with Johnson’s sentiment about U.P. players, as a lot of them tend to play with something to prove.

“The mindset is a little more blue-collar up here,” Grazilus said. “We have to play as hard as we can, more than most other players in the state.”

Playing basketball wasn’t the main reason why Charboneau, a 6’6” athletic slasher, wanted to come to Allendale, as he felt that GVSU could best prepare him for a career post-basketball in the medical field.

“The recruiting process was all education for me,” Charboneau said. “I’m going into pre-med, and I thought Grand Valley was one of the best pre-med schools where I could see myself having success.”

The final part of the up-north trio is attempting to do something that not a lot of student athletes have done at GVSU, as Tobin Schwannecke is attempting to play both football and basketball in Allendale. Schwannecke, a 6’3” point guard, mentioned that he loved the idea of playing for GVSU because of how much the coaching staff truly cared about him.

“For me, it starts with Coach (Taylor) Johnson and Coach (Ric) Wesley,” Schwannecke said. “Playing two sports, I got a chance to talk to a lot of coaches at a lot of different programs. Grand Valley really stood out, because they were dudes that cared about me and my future, plus I love the Grand Valley tradition on and off the field.”

Schwannecke has been recovering from a torn labrum since his surgery in May, but as has been the case his whole life, he knows what it takes to prepare 365 days a year to play football and basketball, especially on a college level.

“I’ve played both sports my whole life, so it’s truly a 365 day commitment,” Schwannecke said. “I’ve always been go-go-go all year round, so that won’t be a big change for me, and on a day-to-day basis, it’s a challenge that I’ll be excited to see play out.”

All 3 players have come to GVSU a few times, not only for orientation, but also to participate in open gyms and help out at offseason kids camps. Johnson is proud of the work ethic of all three guys, as he knows they will work hard to make a name for themselves in West Michigan.

“This is special what we have here, to get all these up-north kids with a chip on their shoulder” Johnson said. “Why not play at a down-state GLIAC school with swagger? It was a different path for all three of them to get here and be together, and hopefully four years from now, we can say this was one of the best up-north groups ever.”

Johnson is excited to see this recruiting class play together come November, as all of these recruits being hard to get is a signal that they are all talented, sought-after players.

“It’s a special class for me,” Johnson said. “I’ve known these kids for a long time, and the greatest thing about them is they were all tough to get, which means they were wanted players. They’re all team guys, which we are excited about the most. Hopefully this is a class that can make some really special memories and success on the court.”