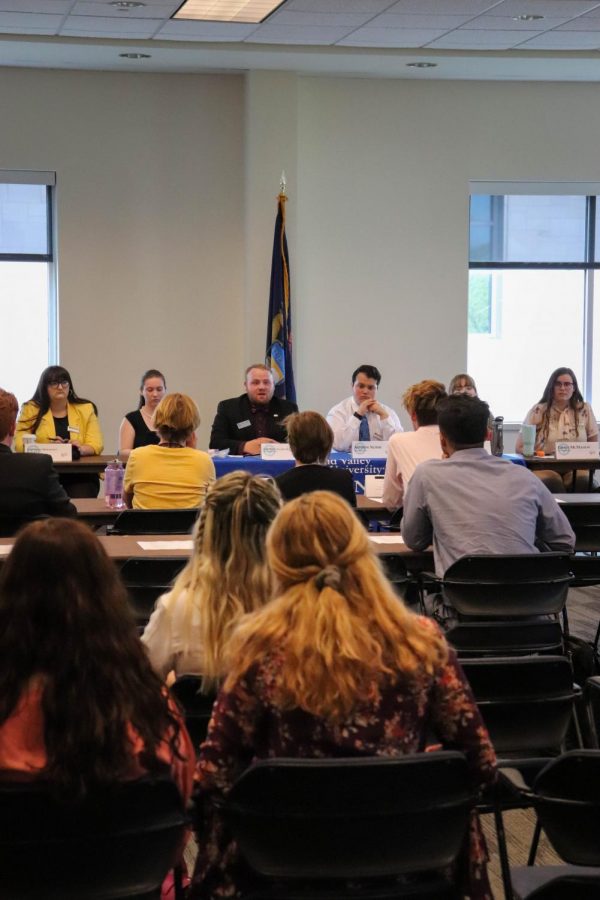 UPDATED 9/4/19 – This story has been updated to include the university’s position on the topic — which was regrettably left out from the story initially — and correct lapses in the initial reporting. The Lanthorn continually strives to improve on its news coverage and present the most accurate information to its readers.

This year, Student Senate President Eric-John Szczepaniak looked to continue the senate’s positive change through investigating accessibility issues within the Board of Trustees at Grand Valley State University. Szczepaniak was dismayed to find that the Board of Trustees didn’t appear to be taking steps to improve community access and comment on the Board’s actions and decisions, and began pushing to make change.

Szczepaniak contacted the Department of Attorney General to inquire about the legalities of the Board of Trustees, who he believes continue to violate the Open Meetings Act (OMA), which says that universities are exempt from following the OMA when conducting a presidential search. However, the justices did not speak to the OMA requirements for formal meetings of the university boards in this case.

The Attorney General’s office informed Szczepaniak of the normal process for a violation of the Open Meetings Act, which is to file a police report and to contact a local prosecutor. However, this response did not provide a clear answer because the Attorney General cannot legally answer questions of this sort unless asked by either chamber of the Legislature or by the Governor.

Szczepaniak then said he attempted to gain access to the chair of the Board, but was cut short quickly. Following this response, Szczepaniak decided to file a police report in hopes of raising action. The issue is an ongoing one, but Szczepaniak explained that President Philomena Mantella has been a big help in making change.

“I have been in contact with President Mantella who, to her credit, has taken several steps to make the Board of Trustees more accessible in ways that do not require Board approval,” Szczepaniak said. “This includes creating a link on the Trustees website page to request public comment and posting the times that the Trustees will meet in their committees. If someone wanted to address the Board in the past, they would have had to read pages of bylaws and hopefully stumble across Section 3.9 to learn how to do so.”

Following the complaint filing, the Grand Valley Police Department (GVPD) received paperwork from the complainant and attached it to the report. During the investigation, GVPD spoke with the university’s legal counsel and requested documentation regarding the inapplicability of the Open Meetings Act. GVPD then forwarded it to the Ottawa County Prosecutor’s Office for review, but have not yet heard back.

GVPD Captain Jeff Stoll explained that while this report was an unusual one, the GVPD was still willing to help.

“We deal with the unexpected, so our reports vary in terms of their simplicity and complexity, and while we have never dealt with an Open Meetings Act complaint filing, it didn’t necessarily take me by surprise,” Stoll said. “We are working in those parameters as a police department, where many things happen on a given day, and our department will take into consideration any complaint.”

Associate Vice President of Communications Mary Eileen Lyon said that GVSU fully supports the student voice in university decision making. Additionally, Lyon said the Board of Trustees bylaws are in full compliance with Michigan law, including how meetings are to be held.

Many courts have ruled that the Open Meetings Act does not apply to public universities in Michigan. Despite this, students and members of the public have always been able to address the trustees at their meetings, Lyon said.

After review of the website outlining the process, changes were made to ensure that anyone interested in addressing the board at a meeting could easily find the appropriate link and make the request.

Above all, Szczepaniak says he filed the report only as a last resort and hopes to see the Board respond positively. He explained that Student Senate does not like to be in an adversarial relationship with the Board of Trustees or administrators, and works to build relationships with those that can make positive changes for students every day, including Board members.

“At this point, further changes must be made by the Board of Trustees,” Szczepaniak said. “We hope that they will listen to the student body that has articulated that public comment is an essential part of a democracy. When it comes to the accessibility of the Board of Trustees, there is no middle ground. What we ask of the Board is to comply with the bare minimum, to hear what others have to say. We pride ourselves on being an institution dedicated to lifelong learning but the Board of Trustees practices and policies make it nearly impossible to hear from a wide swath of the student population and the general public.”

Lyon said that despite this concern, the university has historically been willing to communicate with Student Senate in working to provide clarity and transparency from the Board, and has structures in place to preserve student voice. When change has been requested, GVSU has been cooperative, she said.

“Grand Valley has a firm commitment to student engagement, and has a long history of student involvement in university decision making and governance,” Lyon said. “The Student Senate president has always been invited to report to the Board at formal sessions, and Chair Mary Kramer and Provost Maria Cimitile have specifically invited Student Senate President Eric-John Szczepaniak to attend Board committee meetings, where dialogue among attendees routinely occurs. University leadership heard the concern about public comment at board meetings and acted.”