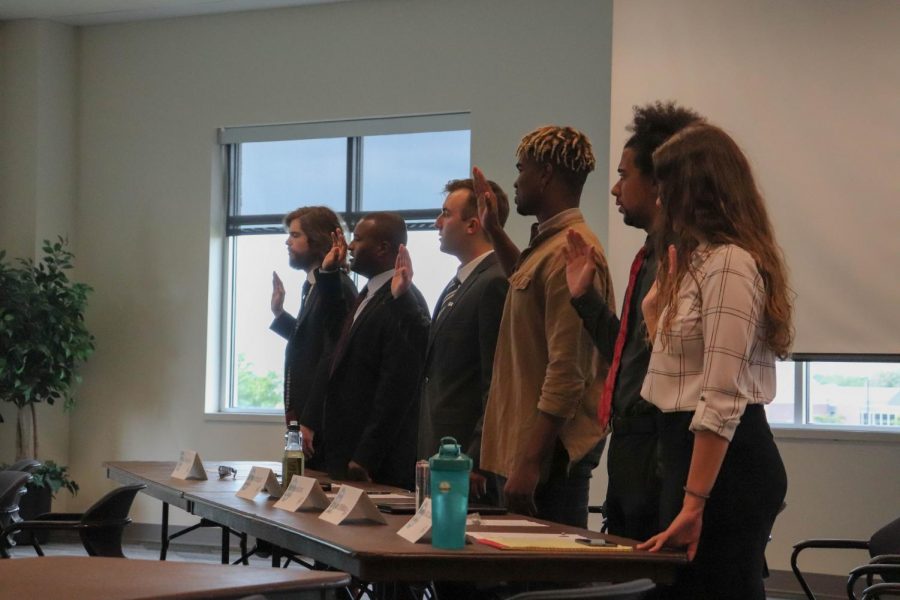 Addressing student senators during the first general assembly of the academic year Aug. 29, Grand Valley State University President Philomena Mantella recited the senate’s oath, swearing in the bulk of its 2019-2020 legislative body. While several empty seats dotted the room — to be filled by the interested applicants seated in the gallery — the formality acted as a ceremonial start to Student Senate’s year of work.

“You’re helping us build the university and the student voice within it,” Mantella said after reciting the oath.

Mantella also fielded questions from senators. With the majority of the year ahead of them, senators asked the university president what she expected of them and their work.

“First and foremost, set an environment of representation so it’s not your individual views coming forward, but that of the student body,” Mantella said. “It’s really getting to (and representing) folks who are on their individual journey.”

Questions from around the room asked what the president’s vision was both for her role as president and for the university’s image. As the university continues to grow, students wanted to know whether Mantella would fight to maintain GVSU’s student-centric approach or shift toward prestige, such as universities like Michigan State University and University of Michigan.

Mantella said she didn’t believe there to be an ultimatum. While she said she would continue to look for the intersections of these paths, Mantella said her focus would be to preserve facets of GVSU’s mission, which include promoting entrepreneurship and experiential learning.

The university president also answered questions about Greek Life — noting that they, along with other student organizations, contribute greatly to the university and will not “undermine the campus culture” — and how she plans to involve a range of voices in helping fuel ideas for future growth.

Other senate actions included a presidential report updating the body on the police report he filed against the Board of Trustees’ violation of Michigan’s Open Meetings Act and a vice presidential report on an ongoing project to award an off-campus apartment for exceptional service to students.

Senator Nitzkin also provided an update on a multifaith prayer room at GVSU’s Pew Campus. While like the Kirkhof prayer room, this one is still in development, so a classroom is being reserved for daily prayer or meditation as needed. Nitzkin said students may use Room 304 in the Richard M. DeVos Center Monday through Friday.