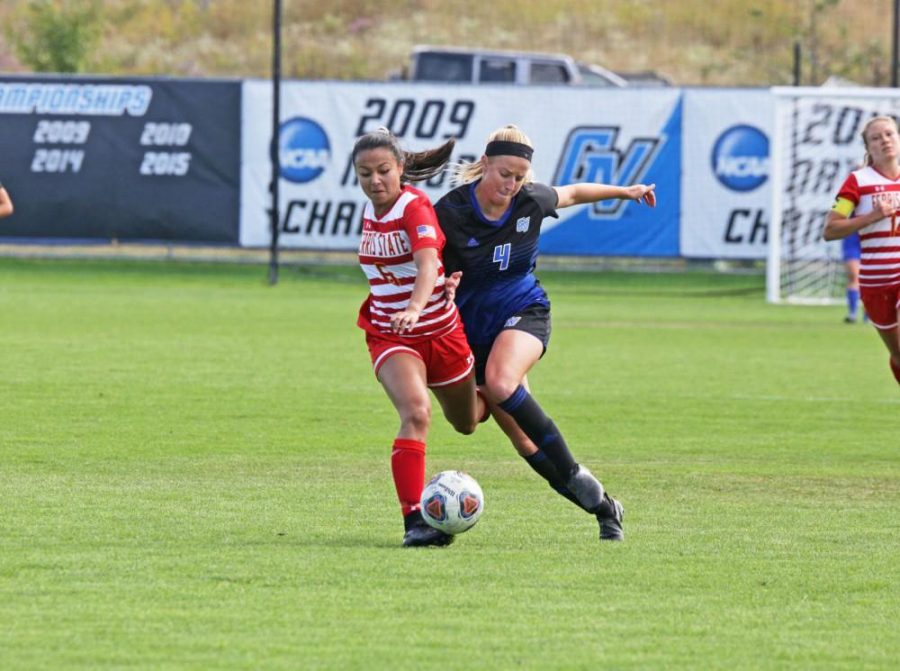 “The first time I came here, I came to a Winter ID camp my sophomore year of high school,” said Grand Valley State University forward Ava Cook. “I talked to Jeff afterward, and it was just kind of, you need to get better in all these areas.”

Now going into her junior season, Cook has come far since that evaluation some five years ago.

At the conclusion of her sophomore season, Cook lead the GVSU Soccer team and finished tied for fourth nationally among all DII soccer players with 24 goals scored.

“She’s definitely had a cool story,” said GVSU Soccer Head Coach Jeff Hosler. “…from her sophomore year to junior year (of high school), there was immense growth and from there it was more of a question of ‘where do you fit in with this team’ as opposed to ‘you need to do this, this and this to improve.’”

Cook grew up playing high school and club soccer in Battle Creek, Michigan and no matter where Cook has played, the words hardworking and mentally tough have followed.

In fact, when asked what word best describes his junior forward and has allowed her to become so successful, Hosler replied with tough.

That energy is what has helped GVSU put up gaudy scoring differentials over recent history. In part due to Cook’s scoring proficiency, GVSU has outscored opponents 99-9 and 114-11 over the two seasons she has played in Allendale.

That tone and mentality continue to garner Cook respect among DII programs all across the United States. Going into this season, ncaa.com released a list of the country’s best DII goal scorers among women’s college soccer, and Cook was the only junior named on the list, being the third best returning goal scorer in the country from a year ago.

Cook also added that being on a list of the top 10 goal scorers in the country has motivated her to continue on the path that she believes she is on and continue to score as much as she can.

“It’s nice to be on that, but I have to recognize that’s not where I stop,” Cook said. “I have to be better than that.”

Although that mentality has earned her much respect in the world of DII soccer, Cook views her energy helps benefit her team even more.

“It can be as simple as making a slide tackle,” Cook said on how her play can influence her team. “That type of play, that little bit of extra effort can give a lot of motivation and a lot of energy for everyone to do the same, so that’s kind of how I like to show leadership out on the field.”

While she has excelled as a leader out on the field and while attacking the net on the GVSU front line, she still feels she can improve her offense prowess.

“I talked about it a lot last year with Jeff,” Cook said. “But for as many goals as I scored last year, there are many more that I could’ve and that really stuck out to me a lot throughout the year. I just need to make sure I’m capitalizing on the opportunities that I’m getting in front of goal.”

Cook added that she also needs to follow Hosler’s advice of not shooting to shoot but shooting to score. Hosler also believes she can improve in off the ball movement.

“I think she has improved in this area but I think she needs to be more aware of her movement off the ball and pick some more dangerous spots to get into,” Hosler said. “She’s going to show up in a big way in other teams scouting reports, so she has to find ways to be available and relocate.”

Even though Cook views she has more to improve, she still views that this season will be an exciting one to watch unfold.

“I think we have a really, really good dynamic going into this season and going into our home opener,” Cook said. “I’m just really excited to get out on the field and play with everyone around me.”

When looking at how Cook will impact this team in the future, he had this to offer: “I think a person like Ava has really been someone who has burst out of their talent bubble and I think she’s a really great kid,” Hosler said. “She has a lot of natural leadership qualities. I’ve always thought that when you have one of your best, most talented players that is also one of your hardest workers it makes it a lot easier to motivate and drive the rest of the team.”

Catch the GVSU Women’s Soccer team in action in their opener on Thursday, Sept. 5, at the GVSU Soccer Field against Rollins.