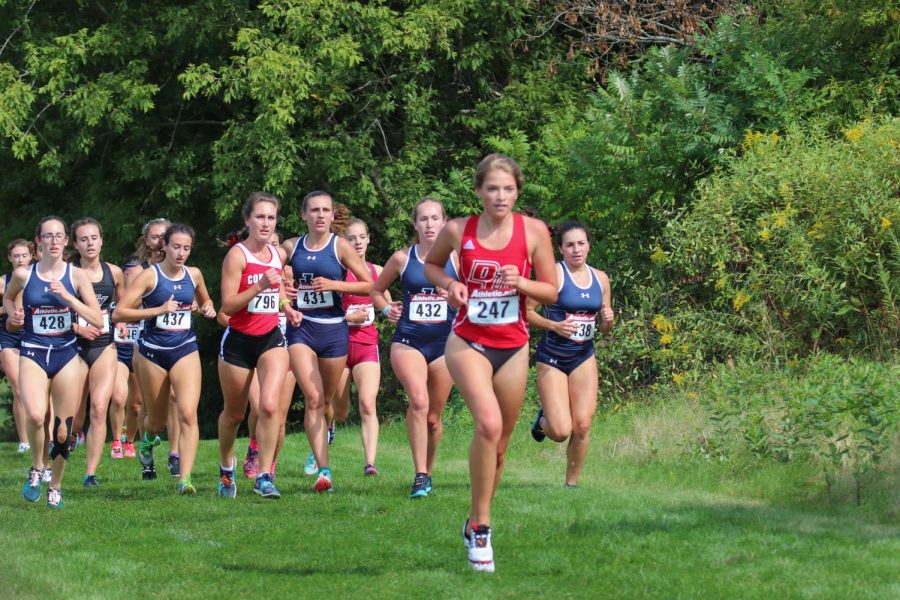 This past Saturday at Calvin College, both of Grand Valley State men’s and women’s cross country teams ran their first races of the season. GVSU placed in the top five in both the Women’s 6k and the Men’s 8k, leading into what looks to be a great season for the runners. With 35 schools competing this weekend, GVSU showed promising results.

Starting the day off was the Women’s Open, followed by the Men’s Open, and for such a beautiful day to be running GVSU seemed to show everyone what to expect from them this year. The crowd was huge, cheering on the runners as they crossed the finish line and celebrated with friends and families.

Since there seems to be a good amount of freshman on the team, the upperclassmen are more than thrilled to have the new recruits running with them. A few of the freshman showed impressive starts to the season, placing in the top five GVSU finishers in all races. Lucy Karpukhno and Lynsey Amthor, both freshman, ran outstanding times in the first Women’s 6k, setting GVSU up for 4th place overall.

Maddie Dohm, a sophomore this year, feels confident with the new runners abilities that she has seen so far in practice. Before the last women’s 6k, being her first race of the day, she felt comfortable due to experience she gained last year.

“I feel good going in just because I have a year under my feet,” Dohm said. “So I feel more confident knowing that I have that.”

Dohm ran a 23 minute 6k afterwards and received first place, highlighting GVSU as a team to look out for on the DII cross country scene.

In the Men’s 8k, the upperclassmen took the spotlight and placed GVSU as 3rd overall. Sophomore Dawson Winters stole the lead this time after recovering last season from an injury, with senior Tyler Walters following just behind him. The guys team looked great out on the course, feeling good after their first run of the season.

Coach Jerry Baltes emphasized how nice it was to get back on the course after a long offseason.
“It was a good start for our individuals in uniform,” Baltes said. “A great opportunity for them to bust some rust off, and I saw some positive things across the board.”

Overall, it was a satisfying performance for the first race of the season, just to see what the future will hold for GVSU.

In regards to all the freshman on the team, Baltes thinks the future of this team is in good hands.

“This first meet of the year is really for the young kids to get some valuable experience and hopefully put them in a better position moving forward,” Baltes said. “We ran all out true freshmen unattached. Lucy ran really well, leading the way and Amthor ran solid so that was good.”

Going into the season, the team seems to be getting comfortable after the summer and back on their running feet. This weekend was only the beginning and there is much more to prove for the dedicated runners of GVSU.

GVSU will travel to East Lansing for their second match of the season on Friday, September 13. The Spartan Invitational starts at 11:00 a.m.