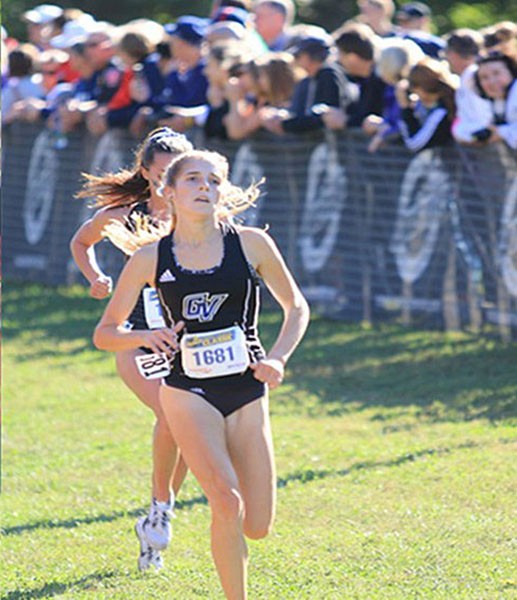 As a fifth year college student at GV, Alli Ludge has been running for the Cross Country team since freshman year and has lots of wisdom to go around for the younger runners. With all her experience and advice for the new recruits, she has taken on the role of senior leader for the women’s team.

In her first year at GV she ran unattached like most freshman, and since then has made her mark on the history of the team, finishing in first place just last weekend at the Spartan Invite. As far as her role as the new leader of the team she feels like the old lady or mom now.

“I think we have a great team this year and it really is young but it’s been really fun,” Ludge said. “We have a lot of new girls and they’re all working hard to gain a lot of experience. It’s fun to be able to be where I am and to know I was in their place at one point, and hopefully I’ll be able to lead by example for them.”

While she’s on the course, Ludge says that she tries to map out a roll with the moves that are being made to stay focused on where she’s placing and where her teammates are. In practice, however, she loves hanging out with the girls on the team and tries to have some more fun than during the meets.

Since Ludge is going into her final year of college, it’s bittersweet to be saying goodbye to the team at the end of the year. She has made so many friends and memories over the course of her time here at GV, but one moment last year has resonated with her to this day.

She remembers running the National Championship that they won with one of the graduated seniors in first place, herself and another teammate behind her in fifth and sixth, and one more making four total GV runners finishing in the top ten.

Ludge says it was a moment that they all worked so hard for throughout the year, and having it all come together on one day was pretty powerful for her and her teammates, especially since having four members of the team appear in the top ten is uncommon in cross country. Aside from the times shared in practice and on the course, winning first place in the National Championship makes for a great moment to look back on.

Her whole college career has been heavily influenced by her participation with cross country.

“It’s been a huge foundation of my college experience in general,” Ludge said. “As I’m getting closer to graduating its really helped me with life skills that I’ll need beyond Grand Valley and running, just with time management and commitment. Being in something and working hard I’ve found through my internships and running, those qualities have come out more and it has really been a help to me from Grand Valley.”

There is no doubt that being a part of something for so long has helped her through her college career and made her into the person she is now. She would encourage incoming freshman or anyone that loves to run to become a part of the team since it has been such a fun and important part of her experiences at Grand Valley.

“It’s kind of a wild ride, its never smooth sailing so you have to stick with it and take it day by day,” Ludge said. “If you put in the work, it will pay off.”

Having such a big team of younger runners is quite the responsibility to take on, but Ludge is the best person for the job and looks like she’ll be taking the team to another victory year for Grand Valley. Once it comes time to graduate she doesn’t know what the future holds for her, but after her recent marriage this summer she hopes to pursue her career on the east side of Michigan with her newlywed. She can’t imagine her life without running and hopes that she’ll stick with it.