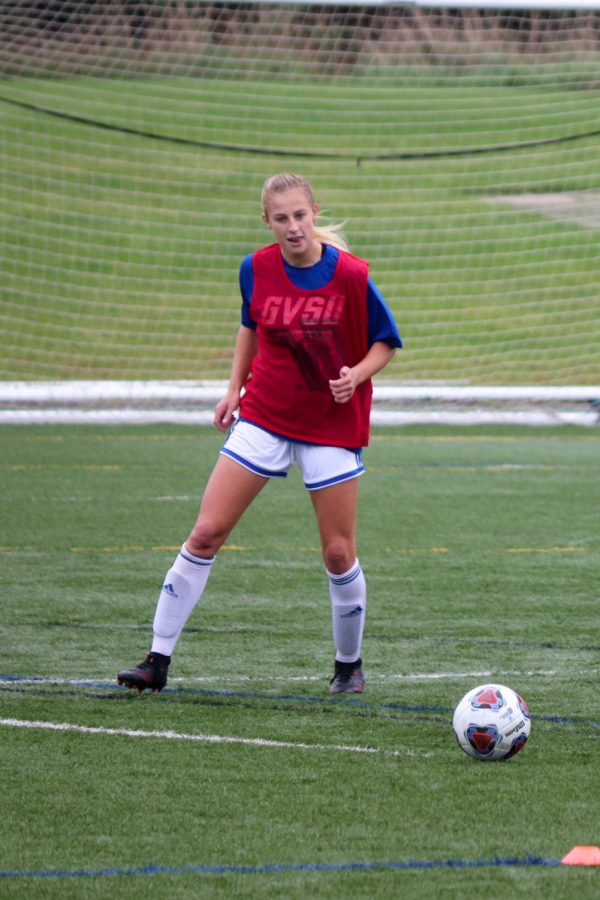 For Grand Valley State University junior forward Ava Cook, soccer has been her livelihood almost from the day she was born.

“I was basically born into playing soccer,” Cook said. “My parents have been into coaching for years and my brother played soccer and went into club basically around the same time I was born so it was there from the get-go.”

With Cook off to a blistering start this year (9 goals and 1 assist in 7 games) and scoring the fourth most goals in the country last year (24), it is no surprise her parents got her into cleats at a young age and that she has loved every second of playing the game ever since.

Growing up, Cook had many role models who influenced her love of soccer, both at the professional and local levels.

“Professionally, I think my biggest role model would be, obviously besides the (United States) Women’s National Team, but individually it would definitely be Christiano Ronaldo,” Cook said. “I’ve loved him and his game since I was really young and just love to watch him play.”

Locally, Cook credits her father, who was a varsity assistant coach at her high school, and girls on the varsity team with helping nurture her love of the game at an early age.

“I grew up around the high school girls and going to practice everyday,” Cook said. “So just seeing them play everyday when I was growing up always made me want to do it.”

Seeing girls go off to play soccer collegiately also motivated Cook to set that as her own personal goal to achieve someday. Cook said that she had a lot of great help developing her skills thanks to a close family friend.

“Todd Wells played a huge influence on my life,” Cook said. “He was a guy that my dad worked with for years and basically helped coach me alongside my dad while I was young.”

Cook credits Wells, a former Kalamazoo College assistant coach, for pushing her and getting her into the soccer program at GVSU, saying that without him she may not have ended up being a Laker.

“He was the one who pushed me to go back to Grand Valley’s winter ID camp after I heard–you know, ‘you’re too small’ and ‘you have too small a frame’ from the camp a year prior,” Cook said. “He was very stubborn about it, so I went back and ended up being recruited and it was solely because he kind of made me do it.”

Cook also mentioned that the feedback she received at her first GVSU winter ID camp during her sophomore year provided her with all the motivation she needed to work hard and get better going into the same camp her junior year and for Cook, the hard work paid off.

“Hearing you just need to get a little stronger, a little this, it was really just used as motivation for me to focus on those things,” Cook said. “Knowing those improvements could get me to a program like Grand Valley made it obviously easy motivation for me.”

When Cook got to Grand Valley, she said the level of competition increased dramatically, but her teammates and coaching helped her make a quick adjustment that allowed her to blossom into the player she is today.

“Jumping into my first game my freshman year, the pace of play was just way faster, like WAY faster,” Cook said. “But being in the same position my freshman year, Gaby Mencotti, who is basically a Laker legend at this point, is someone I still look up to even to this day and helped me a lot when I was getting into the program.”

These days, Cook has emerged as the emotional leader of a talented Lakers squad that has high expectations going into this season.

GVSU  coach Jeff Hosler mentioned that what makes Cook such a strong leader is her toughness on the field.

That same type of mentality is reflected in Cook’s goals for the season ahead, who is happy with her accomplishments but isn’t satisfied with where she is today.

“The very last thing I want to do is kind of slide and coast and go through the motions,” Cook said. “I really want to continue to grow as a player and if I work hard I can continue to achieve at the level I have in the past moving forward.”

In terms of her soccer career post-college, Cook said it would be amazing to have an opportunity to play professionally abroad like Mencotti, who signed a pro contract to play in Iceland after graduating from GVSU, but it is too far in the future to consider right now.

“Women’s soccer is getting a lot more publicity both nationally and internationally and that gives girls like me a lot of motivation to achieve dreams like that,” Cook said. “So that would be amazing if that happened some day, but it’s still a little early to think about that stuff, especially when it comes to school and stuff like that.”

In terms of academics, Cook is an Advertising and Public Relations major at GVSU and has a passion for the graphics design aspects of advertising. In her free time she has even worked on some of the graphics the women’s soccer team uses on their website and on Twitter.

“I’m really into both advertising and graphic design so I think I can combine both together and find something I really like after college,” Cook said. “I love the creativity side of it so I don’t think I’m going to lack in motivation when it comes to finding a good place for myself.”

The No. 4 GVSU Lakers as they take on the Wisconsin-Parkside Rangers on Friday, October 11th at 7 pm under the lights in Allendale