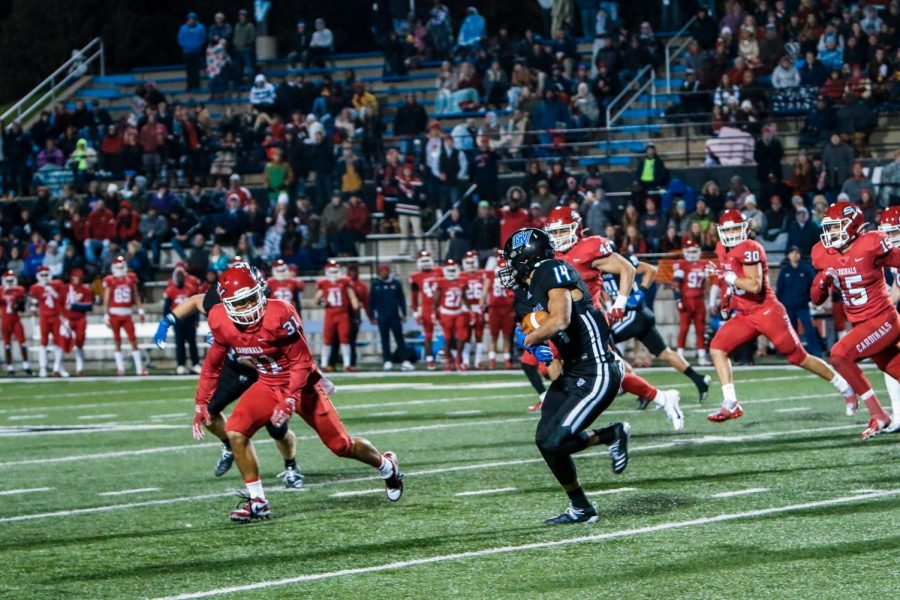 Following a duo of games that came down to the final play, GVSU was able to earn a much more dominant win in the Upper Peninsula Saturday, Oct. 19, as they demolished the Northern Michigan Wildcats, 45-10.

While starting quarterback Cole Kotopka arguably posted his worst game of the season in the SVSU win last weekend, he was a man with a vengeance this weekend. Kotopka posted two career highs of 402 yards passing and five touchdowns to five different receivers, including a 76-yard touchdown pass to wide receiver Luke DeLong and a 63-yard passing touchdown to tight end Jayk Slager.

Even though 2019 has been a rollercoaster season for Kotopka, GVSU coach Matt Mitchell is happy to see his starting quarterback get his swagger back.

“We have faith in Cole,” Mitchell said. “He has earned the starting spot based on spring ball and fall camp. It’s been a tumultuous start to 2019 because of his injury where he missed two-and-a-half games, and it doesn’t help that we’ve had some ups and downs to our receiving core, but I think we’re finally getting everyone back on the same page, and I can’t discount the fact that we did a good job protecting the quarterback today.”

The injury history for GVSU running backs has been much too long, as Aryuan Cain-Veasey, Bryce Young-Walls, and Jack Provencher — the first three running backs on the depth chart — have each missed the past two games with various lower body soft tissue injuries. While none of those injuries are season-ending, Mitchell is proud to see the young ball carriers step up in a time of need for the time.

“They did a good job,” Mitchell said. “Tariq had an ankle injury in the Saginaw game, so he came back and was a little hobbled. We were up against it when it came to our running back depth, but Johnt’e was the healthiest and did a good job carrying the ball. That’s an area of concern for us, but I’m really proud of both redshirt freshmen, they’re playing a lot and we did not anticipate that happening.”

The Lakers lone takeaway of the day came in the second quarter, as redshirt freshman linebacker Abe Swanson perfectly read a NMU screen pass before picking it off and returning it 22 yards, taking any wind that the Wildcats had left out of their sails.

Mitchell attributes Swanson’s interception to not only his progress in practice, but also his ability to remain coachable and learn under the tutelage of senior linebacker Isaiah Nkansah, who has started ahead of Swanson all season.

“He did a great job reading the screen pass and made the play,” Mitchell said. “Isaiah Nkansah has been a great senior leader for us at that middle linebacker position and Abe is his backup. Abe’s been practicing real well, and he had more reps today just based on how things went, so I’m glad he was able to make that cool play.

With the win, GVSU improves to 6-1 on the year with a solid 4-1 record in conference. With some big games ahead of them including the Crosstown Showdown against Davenport Saturday, Oct. 26, Mitchell would love to see his team play more mistake-free football as they had into a key part of their schedule.

“I’m pretty disappointed in the penalties,” Mitchell said. “We had some penalties like offsides that we need to clean up, so we got to get locked back in there. The big thing is that we came up and got the win; there’s still some things we need to improve upon, but I’m proud of our guys for sticking with the process.”

This week’s GLIAC game at Lubbers Stadium is set to kick off at 7 p.m.