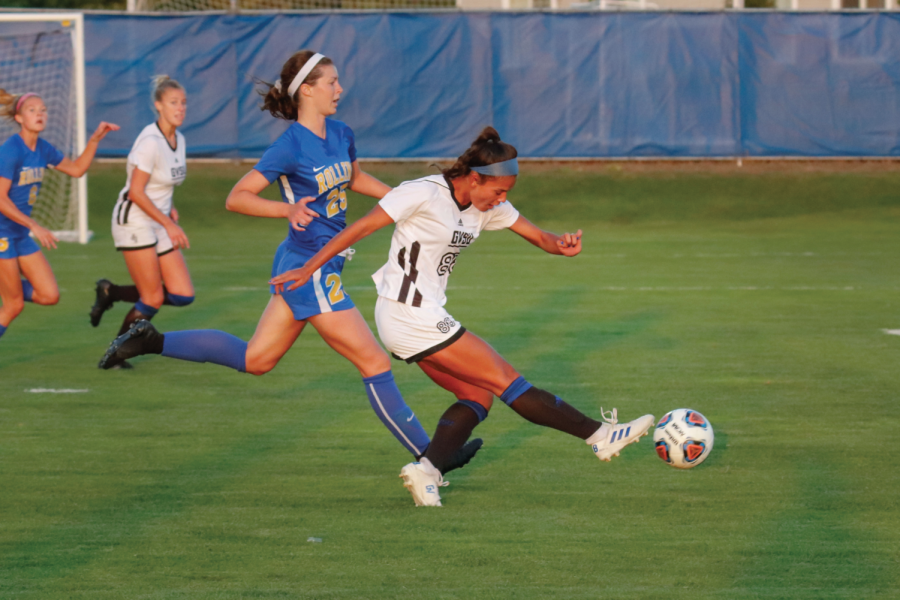 The no. 3 Grand Valley State University Women’s Soccer Team traveled to what will be the great white north of the Upper Peninsula in a few weeks to face the Northern Michigan University Wildcats on Friday, Oct. 18. The Lakers once again came away with a convincing victory, 5-0, but this time a fresh face exploded onto the scene to lead GVSU in scoring in a big way.

Redshirt freshman forward Chantel Carranza provided her first hat-trick of her young career, as the redshirt freshman scored the first three goals – and four overall – in the match, the second time a Laker has scored four goals in a single contest this season. Junior forward Ava Cook also scored in the match for her GLIAC-leading 14th goal of the season.

“Chantel was fantastic today,” said GVSU Head Soccer Coach Jeff Hosler. “We’ve been focusing on getting her more touches and she was on the ball finding her rhythm in the first half and then found really great spots in the second half to be dangerous and capitalize on her opportunities.”

Carranza gave the Lakers the lead in the 16th minute, when she punched home a through ball from sophomore midfielder Darline Radamaker to break the scoreless tie. That would be the only tally of the first half.

The Lakers attempted to funnel the ball through the middle of their offense to their forwards early on, but Northern Michigan was able to stifle GVSU with their back-line. This made scoring opportunities difficult to come by in the first half, even though the Lakers controlled possession of the ball mostly on NMU’s side of the field.

Seeing the opportunity, GVSU switched to a wing approach to attack the Wildcat back-line in the second half.

“They were giving us a little more space out there,” Hosler said. “That opened up for us in the second half, we had some really well timed runs and got our midfielders high up the field.”

Carranza scored again just two minutes out of halftime, using a setup by junior midfielder Lauren Ross from the left side of the box and finishing off the centering pass.

Just a few minutes later, a loose ball in the box was centered by junior forward Caitie Baron – the reigning GLIAC Offensive Player of the Week – and Carranza put the ball in the top shelf to add to the lead.

Moments later, Riko Sagara lofted a free kick to the center of the box where Cook was able to launch and head home the service. Another set piece, this time a corner, set up Carranza’s fourth goal when she finished off a combo from junior defenseman Olivia Trombley after an insert from another junior defenseman, Cecilia Steinwascher, in the 83rd minute.

“I was able to get myself in front of goal and make myself available for my teammates to find me,” said Carranza after the match. “Once they did I just put the ball in the back of the net and try to help get ourselves a win.”

The win for the Lakers was their seventh in a row, which moved them to 10-1 on the season and 3-0 in Great Lakes Intercollegiate Athletic Conference play. The victory also marked GVSU’s seventh consecutive shutout of their opponents. The Lakers have outscored their opponents 34-0 over those seven games.

Up next, the Lakers play the Northwood University Timberwolves at 7 p.m. under the lights at the GVSU Soccer Field in Allendale on Friday, Oct. 25.