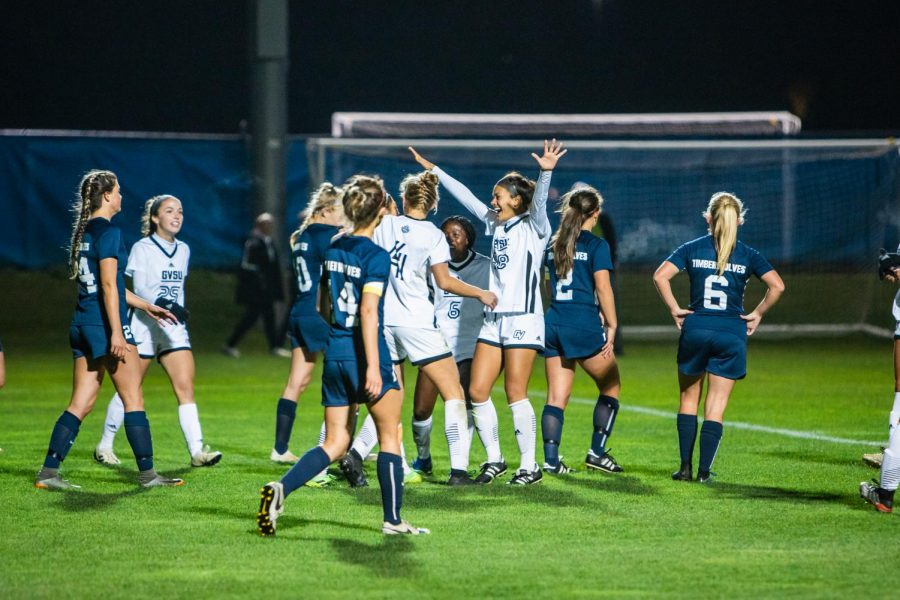 The No. 3 Grand Valley State Soccer team earned their ninth consecutive victory with a 3-0 win over the Northwood Timberwolves on Friday, Oct. 25, in Great Lakes Intercollegiate Athletic Conference (GLIAC) action at the GVSU Soccer Field. GVSU improves to 12-1 on the season and 5-0 in GLIAC play.

“I think we were very organized all night long tonight,” said GVSU coach Jeff Hosler. “Northwood has been on a really good spell lately. They’ve been playing well in conference play and we were able to cut them out of a lot of opportunities.”

Before losing to GVSU, Northwood was 8-5 overall with a 5-2 record in conference play and a 3-1 mark over their previous 4 games. The Lakers outshot the Timberwolves, 19-1, while also preventing them from initiating a corner kick over the entire match. Northwood goalkeepers Bridget Adams and Andrea Everett combined to stop 9 out of GVSU’s 12 shots on goal during the match.

The win also marked GVSU’s ninth straight shutout of their opponents and 11th overall through 13 games on the season.

“I think the streak is really important and I’ve been really excited to keep the shutouts,” said GVSU defenseman Sydney O’Donnell.

When was the last time a team scored against the Lakers was Sunday, September 15 when No. 25 Minnesota State Mankato snuck a ball past goalkeeper Jessica Radice after a turnover in the 85th minute that allowed them a clean look one-on-one in front of goal. The Mavericks converted, and GVSU lost 1-0 even though they held a 25-8 advantage in shots.

Since then, not a single ball has gotten by Radice in goal, and on Friday, the Lakers had no trouble converting opportunities against Northwood.

Midfielder Riko Sagara scored twice to lead the Laker attack while defenseman Sydney O’Donnell provided a goal and assist in the win.

After forward Ava Cook drew a penalty in the 17th minute, Sagara calmly converted to give the Lakers the lead. That 1-0 lead would hold until halftime.

In the 53rd minute, it was O’Donnell’s lofted cross after a foul set up a set piece for the Lakers that Sagara would soar in and head home to double the advantage, 2-0.

“I knew when I was going down the line the left footed cross wasn’t on so I just pulled it back and hit it with my right foot,” O’Donnell said. “I saw three or four people in the box and Riko had a nice header to score.”

Just past the 60-minute mark, O’Donnell turned from provider to goal scorer when she collected a loose ball in the box and finished into the far corner to round out the scoring.

“I was looking for Ava wide, I played her, and I knew she was one-versus-one with her defender, so I was just sprinting into the box because I knew she was going to get a cross off,” O’Donnell said. “Then it just bounced off of another player and I just hit it in.”

O’Donnell has now recorded nine points over the last six games from her outside back position.

“Sydney has been unbelievable, the last couple of weeks she’s been doing a really good job of getting herself forward and putting herself in dangerous positions,” Hosler said. “I think she’s really figuring out the outside back position in her second year here and she’s been a great weapon for us.”

GVSU will be in action next at 7 p.m. on Friday, Nov. 1,  as they travel to Ashland to face the GLIAC rival Eagles.