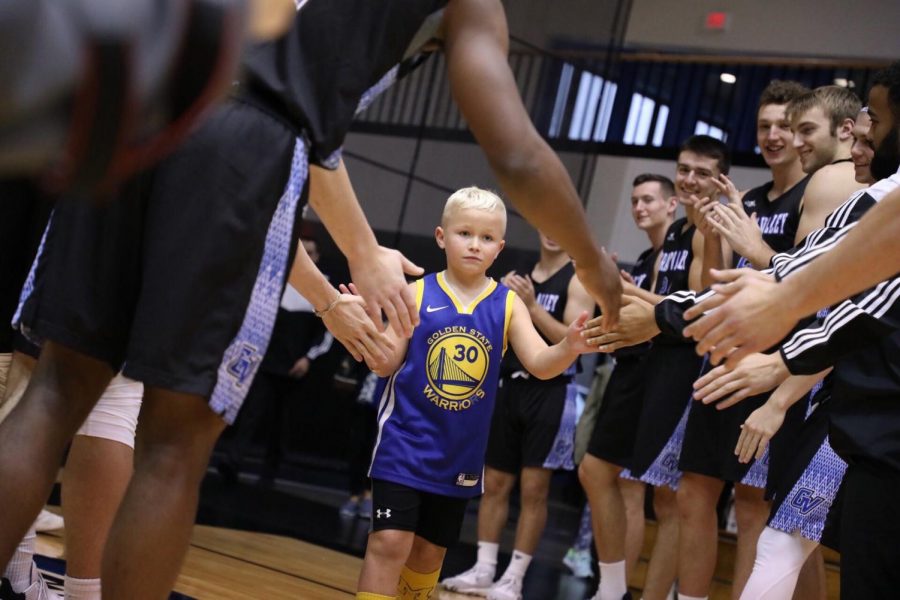 “(Zach is) Coach Wesley’s neighbor, and he’s always telling me how much (Zach) talks about me,” Ferguson said. “I figured it was the least I could do to give him a jersey. It’s a great feeling. It goes full circle because I remember watching my brothers play and looking up to people, so it’s definitely a good feeling.”

Bolhuis got to visit the GVSU basketball team at practice, getting a chance to shoot with the team, get a signed jersey from Ferguson, take photos with the team and have a day that he will never forget.

“Zach is a big fan of our team, and he really looks up to Jeremiah,” said GVSU coach Ric Wesley. “We invited him to come over, and he is a shy little guy that loves to work on his game. That was fun to get him over and it made his day, his family enjoyed it and I think Jeremiah enjoyed it too knowing his No. 1 fan was there.”

While Bolhuis wasn’t in attendance for GVSU’s scrimmage at the DeVos Fieldhouse against the Hope College Flying Dutchmen, he would have been happy to see the Lakers dominate in a 99-62 win, with Zach’s favorite player leading everyone with 22 points in the contest, pairing with it four assists and five steals. Junior Jake Van Tubbergen finished the game with 21 points, while fellow junior Christian Negron finished with a double-double (16 points and 10 rebounds).

“It was good to play somebody else,” Ferguson said. “I think we played well, we defended decent, but we can always get better on that side of the floor.”

After a thrilling junior season that included Ferguson hitting a buzzer beater against Wisconsin-Parkside to clinch the GLIAC title, Ferguson said he is ready to make the most out of his final year of eligibility.

The Lakers will look a lot different compared to last season, as they welcome in six freshmen and four transfer students. Those transfers played well on Tuesday, as juniors Christian Negron (16 points), John Slater (12 points) and Issac Gassman (6 points on 2 made threes) look to be key contributors in the 2019-2020 season.

Getting used to playing with all these new faces is a hard adjustment for any team, but Ferguson said that with the chemistry the guys have already formed, that transition has been as smooth as it can be this early into the season.

“They’ve done a great job,” Ferguson said. “I think it’s been a very seamless transition. They are really learning fast and it’s been really easy so far.”

Wesley agreed with Ferguson’s belief in the seamless transition, as it helps that all the guys on the team are basketball players that like to share the ball.

“I’ve really liked this group,” Wesley said. “We’ve had enough practices now to get going. We’re getting there — these guys are pretty comfortable and they’re all very unselfish. They’re not hard to fit in with because they are very giving players and team-oriented.”

The GVSU men’s basketball team will not only be looking defend their GLIAC tournament win and make it back to the NCAA tournament, but will also look to inspire more young kids like Bolhuis to love team basketball and maybe even don the Laker blue one day.

“You hope that that’s part of what we do,” Wesley said. “We hope we can represent our school well for our alumni and fans, but you also hope that from a basketball standpoint that the young guys out there watching look to emulate you and someday be in those shoes and wear that Laker uniform.”

GVSU opens their season Saturday, Nov. 9, at the GVSU Fieldhouse Arena. They tip-off with Alderson-Broadus at 12 p.m.