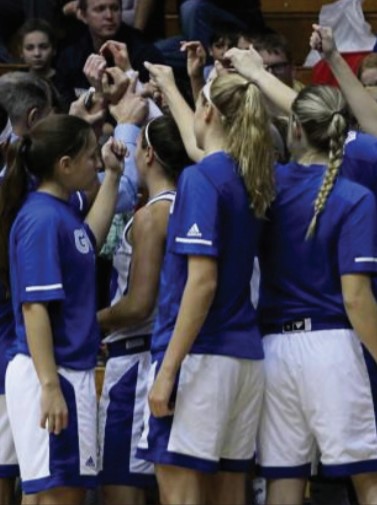 This time last year, the Grand Valley State University women’s basketball team was rounding out their preseason workouts with a group of veteran talent that would go on to have one of the more dominant seasons GVSU women’s hoops has had in team history.

The Lakers finished 29-4 with a 19-1 record in conference play last year, and a GLIAC regular season championship to boot before being knocked out three games into the NCAA playoffs by undefeated Drury University, 51-44.

GVSU is faced with a similar scenario this season, and the rest of the GLIAC conference has taken notice as college basketball season looms just around the corner.

GVSU was picked as the favorite to win the GLIAC south division by the preseason GLIAC coaches poll that was released by the league office Thursday, Oct. 24.

“We had a large group of juniors last year, so we have a large group returning as seniors this year,” said GVSU Head Coach Mike Williams. “The loss (to Drury) motivated them to work hard over the summer and get back to a place where they can put themselves in the same position to play games like that.”

Of the seven players who averaged double digit minutes a year ago, only one (guard Natalie Koenig) was a senior that GVSU lost to graduation. The rest were juniors.

“When you have such a large group of returning players like that, you don’t have to do as much coaching, which is nice for me,” Williams said with a laugh. “But in all seriousness, they know the system and (you) just let them loose, which allows me to focus more on tinier things like adjustments and momentum (throughout the game).”

“Jenn’s a 3-year starter who brings a ton of experience and leadership,” Williams said. “On top of always getting something done, she’s one of our hardest workers too. She’s always shooting in the gym.”

DeBoer deflected the praise from Williams and instead chose to focus on what she thinks is the reason why this team has been so successful.

“I think the chemistry of this team and trust in one another is our greatest strength,” DeBoer said. “We have a group of girls where we are all truly best friends off the court and I think that really helps us play so well together on the court.”

“Maddie Dailey is a player that is just so versatile for us,” Williams said. “She can play inside, outside, defend the post, defend the perimeter. She’s one of those players — and we have a lot of them — that does what it takes to be successful on top of being probably our most versatile player.”

In addition to having six experienced seniors on the roster, the Lakers also added graduate transfer combo guard forward Taryn Taugher, who averaged 7.3 ppg and 2.5 rpg for the Northern Kentucky Norse last year.

“She’s someone who’s been well coached, is very athletic, and brings a lot of energy to this team,” Williams said.

DeBoer agreed with Williams’ sentiment, and built on what kind of player Taugher is.

“She’s the type of player where you have no idea who’s going to come down with a rebound and all of a sudden she snatches it,” Deboer said. “I think she just brings another level of grit to this team and does whatever is necessary to help us win.”

Taugher saw a unique opportunity when she decided to play basketball at GVSU as a graduate transfer. She said there were too many reasons, both athletically and educationally, why she couldn’t pass up putting on the Laker blue and white.

“Being able to get my master’s degree and continue playing basketball was a huge plus for me — the behavioral analysis certificate I can earn here is what I’m really looking for,” Taugher said. “On top of that, I really wanted to play for Coach Williams and a winning program.”

Catch the Lakers starting their season off at the University of Missouri – St. Louis on Friday, Nov. 8 at 2 p.m. and then at home Saturday, Nov. 9 at 2 p.m. against the Maryville University Saints.