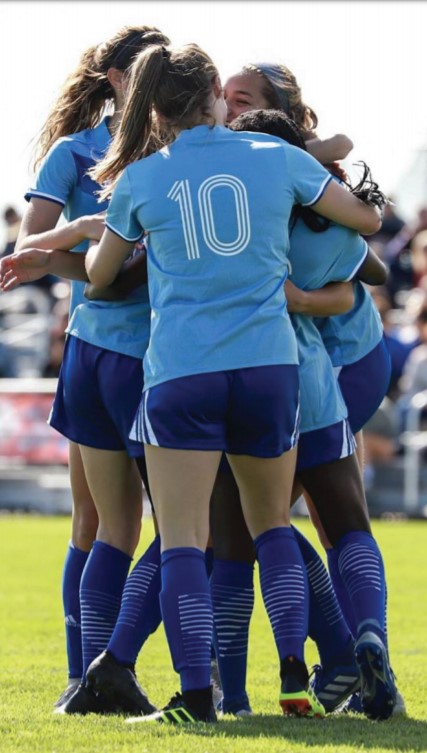 The No. 3 Grand Valley State University Lakers dominated the Ferris State Bulldogs, 7-0,  Sunday, Oct. 27 in GLIAC action at the GVSU Soccer Field. With their 10th straight shutout recorded on the year, the Lakers improved to 13-1 overall and remained undefeated in conference at 6-0.

Looking back on the game, the mentality and focus of the team leading up to the opening kick struck a chord with GVSU head coach Jeff Hosler.

Execute they did. Senior midfielder Riko Sagara scored twice to lead the Laker attack while five other Lakers found the back of the net.

GVSU took the lead in the 11th minute when junior forward Ava Cook controlled the ball in the box and slid it to the center for freshman forward Chantel Carranza, who heel-kicked the ball past the keeper and inside the post for what would be the difference maker for the rest of the match.

The Lakers would go on to score three times in a four-minute stretch around the half-hour mark. In the 28th minute, junior defender Makenna Schoolman struck home a rebound off an insert from junior forward Caitie Baron on the right wing.

“Caitie crossed it in and when it came back out to me, my defender had already left me so I was like, okay,” Schoolman said. “I saw the goal wide open in the back post and kind of just ran into it and smashed it home.”

Then Cook took another cross from Baron and headed it past the keeper for her GLIAC-leading 16th goal of the season.

A minute later, Cook would draw a penalty and Sagara converted from the spot for the second straight match. The Lakers would take a 4-0 lead into the halftime break.

In the 71st minute, a foul on the Bulldogs set Sagara up with a free kick straight on with goal from 20 yards out, which she would convert for her ninth goal of the year and second of the day.

In the 79th minute, junior forward Hannah Klingerman circled the Bulldog defense and rolled a perfect cross in front of goal for sophomore midfielder Chelsea Graves to finish off. Then junior midfielder Lauren Ross provided the extra point with a 25-yard strike under the crossbar for her second of the year to cap off the scoring.

Schoolman summed up the vibe of playing against Ferris and coming away with a resounding victory after the match.

“With the record we’ve had against them in the two years that I’ve been in the program, it’s always been a big game,” Schoolman said. “We always like to get each other fired up before the game, so the energy from the bench was really nice, and everyone was super excited with how everything went today.”

Days later, the now No. 2 Grand Valley State Lakers earned a Top-25 road victory with a 2-0 win over the No. 11 Ashland Eagles Friday, Nov. 1 at Ferguson Field. GVSU, who moves to 14-1 overall and 7-0 in the GLIAC to sit alone at the top of the conference table, earned an 11th consecutive shutout; the longest such streak the program has ever had in a single season since the 2013 campaign. Ashland falls to 12-2-1 and 6-1 in the GLIAC.

The Lakers had a bevy of chances early before junior defender Sydney O’Donnell found the back of the net on an unassisted goal in the 23th minute to break the scoreless tie. That goal would serve as the only tally in the first half.

Early in the second, goalkeeper Jessica Radice saved the lone shot on goal by the Eagles, keeping the Lakers in front. GVSU would get breathing room in the 77th minute when sophomore forward Greta DeLoach scored on a set-up by Sagara to double the lead and round out the scoring.

After the game, Hosler provided some insight on how well the Lakers are playing on defense.

“I think we’ve been really effective defensively — any time you can string 11 consecutive shutouts, you’re doing a lot right as a team,” Hosler said. “Particularly over the last week, to be able to shutout Ferris and Ashland — two teams that have top 40 offenses nationally — shows that we are doing a lot of things very well.”

While the Lakers remain in the driver’s seat to claim an individual conference championship and a No. 1 seed in the GLIAC tournament, Coach Hosler still sees a few things the team could improve upon as the regular season nears a close.

“Defensively, I still think we could be a little bit better with our weak side awareness and some one-versus-one defending moments in our midfield that we’ve got to clean up a little bit,” Hosler said. “Particularly in transition, I think our wingers understanding of where they are supposed to be recovering to and how that changes against different systems could improve.”

Hosler was quick to reiterate that despite those tiny needs of adjustment, this team is still very much playing an elite level of soccer.

“Obviously there’s plenty of things to talk about, but that’s not to be remiss with how effective we’ve been,” Hosler said. “To eliminate Ferris and only hold them to one shot and shutout Ashland and hold them to only 1 shot on goal really shows how well we are playing and I’m really proud of the girls effort over the last week.”

The Lakers round out the regular season with a match at Davenport University Friday, Nov. 8 at 4 p.m.