Preview: No. 14 GVSU Football heads to Big Rapids to take on No. 2 Ferris State 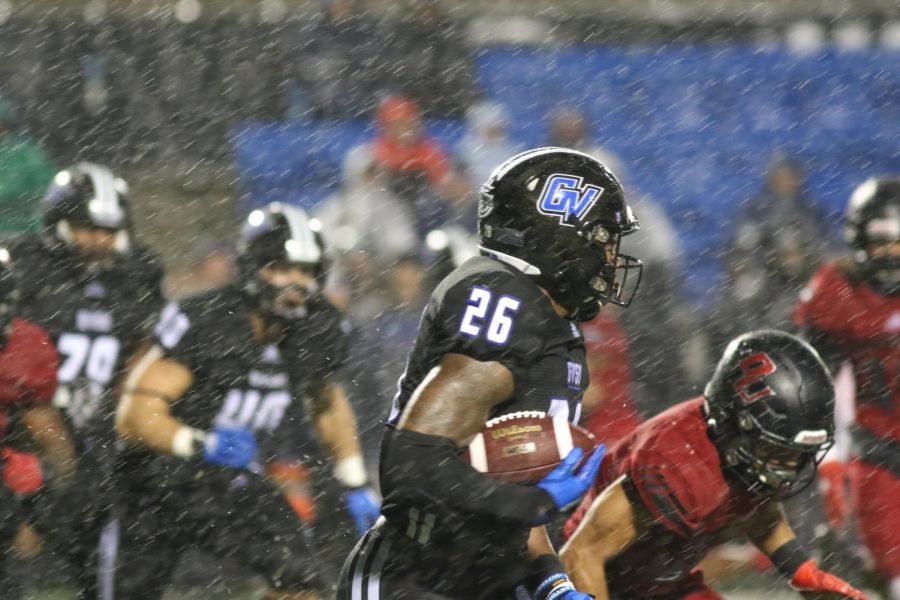 Preview: No. 14 GVSU Football heads to Big Rapids to take on No. 2 Ferris State

Snow has hit West Michigan like a pillowcase full of bricks, but both the No. 14 Grand Valley State football team and the No. 2 ranked Ferris State football team have been grinding through the frigid temperatures, via their respective athletic department’s twitter accounts.

GVSU football OUTSIDE grinding it in the frigid temps and inclement weather like no one else does. #AnchorUp pic.twitter.com/dIvjqh5P1u

The weather isn’t bothering Travis Russell today – first one out for warmups for @FerrisFootball! TRuss is ready go to – kickoff 1 pm pic.twitter.com/gh5GTO6Llh

Both squads have been preparing all week, and frankly all season, for the Anchor Bone Classic on Saturday, Nov. 9. The match-up between two of DII football’s best will kick off in Big Rapids at 12:07 p.m., and will be nationally broadcast on Fox Sports Detroit.

GVSU head coach Matt Mitchell is thankful for the putrid weather all week, since it has been preparing the Lakers for Saturday’s weather.

“We’ve had crisp practices,” Mitchell said. “I think it’s been great that we have had conditions that are going to mirror what we have on Saturday. We’ve had a lot of energy, lot of bounce, lot of spirits, so we’re ready to go.”

What makes preparing for this game difficult for the Lakers is they don’t quite know which quarterback will be suiting up for the Bulldogs.

Quarterback Jayru Campbell is arguably the most talented quarterback in the conference, but he is still listed as doubtful heading into this game.

Ferris State is the first school in conference history to have two different quarterbacks win GLIAC offensive player of the week in consecutive weeks, as backup quarterback Travis Russell threw for 323 yards and three touchdowns in last week’s win over Michigan Tech.

“We’ve watched enough tape with our players, I think they understand the style of play of both those guys,” Mitchell said. “It wouldn’t be surprising to our players if one quarterback played the entire game or if multiple quarterbacks played, it’s still about being in your gap and tackling and doing the right things.”

Thanks to the experience on this GVSU defense, senior linebacker Mike Pettis and his fellow tacklers know how to attack Campbell, but are also prepared should the reigning GLIAC offensive player of the week enter the game.

“We have an older defense, so we’ve seen a lot of Jayru,” Pettis said. “They play a similar type of game, but we’ve been watching a lot of film. The coaches have put together a great plan to attack both those guys.”

This game has rightfully gained a lot of media attention across the state of Michigan, but Pettis said the Lakers are not seeing that as a distraction.

“We’re focused on one goal and one mission,” Pettis said. “This game has a lot of implications on our season. It’s good to have those (media members) come around and cover the game, but at the end of the day, they are not out there playing football with us, so it’s up to us to go out there and have the right mindset to play.”

In the last two Anchor-Bone classics, GVSU has come up short thanks to untimely turnovers and Ferris State hitting a few big plays on fourth downs. Mitchell said keys to right the ship in this one are to hold on to the ball, while also not being afraid to take risks.

“Our offense can not turn the ball over to that senior defense, and we have got to find ways to get explosive runs and explosive passes,” Mitchell said. “It all depends on the flow of the game and the field position, we’ve gone for it on fourth down some this season, it hasn’t been new to us. This is a game where we have to be aggressive and can’t be too conservative.”

The team morale is high heading into this big game, as Pettis and this experienced defense are excited to get after it regardless of the temperature on the field.

“We’re very confident, the game we lost was a very close game,” Pettis said. “We know that we have the guys here to go out and make it a great game, so we’re going in there with the upmost confidence.”

The winner of this Anchor-Bone classic will truly decide the GLIAC conference, as a Laker win would not only put them atop the GLIAC and snap the three-game losing streak to Ferris, but it would also give them high potential to move into the top four in the region, leading to a home playoff game.

Something’s got to give, but with GVSU’s offensive line now fully healthy and the top four running backs all returning from injury last week in a win over William Jewell College, expect at least one of the running backs (my money would be on redshirt freshman Tariq Reid) to break free for a big runs.

That solid running game combined with the uncertainty at quarterback for the Bulldogs gives the Lakers a clear advantage. Russell can take all the stupid shirtless photos he wants, it’s not going to intimidate this GVSU defense, who has amassed experience in close games all season long.

This will be an old-fashioned ground-and-pound football game, but expect to see GVSU come away with a few more big plays and clutch defensive stops to take the win.