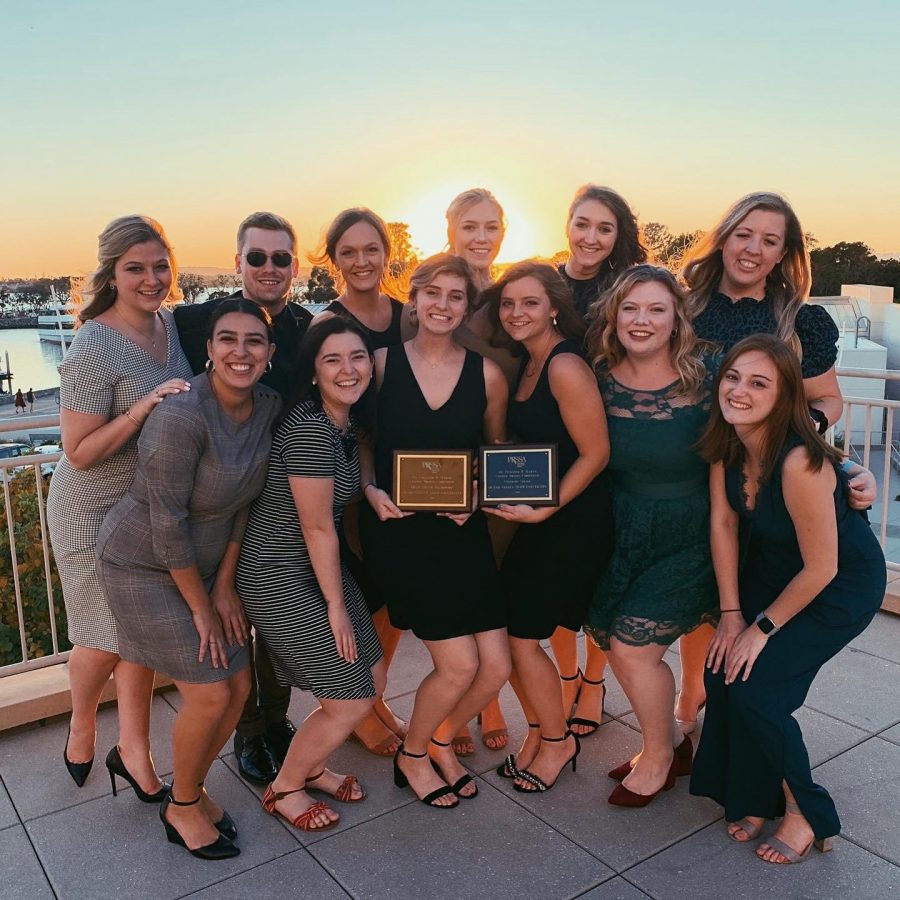 Grand Valley State University boasts over 400 unique student-run organizations on campus, and many of these groups are recognized for the work they do. One of these is GVSU’s Public Relations Student Society of America (PRSSA) chapter, whose leading members recently traveled to San Diego, California, in October for the PRSSA international conference. While there, the organization received four different awards, including Outstanding Faculty Adviser of the Year for Adrienne Wallace, the chapter’s faculty adviser.

The chapter also received the Star Chapter Award for the seventh year running, the University College Service Award and the Outstanding PRSA/PRSSA Chapter Relationship with West Michigan Public Relations Society of America (WMPRSA). Chapter President Delaney MacKenzie said she is incredibly proud of the work the chapter has done and believes that the awards were well-earned and the result of a major team effort.

“We were honored to be recognized with four awards this year, and it was our former 2018-2019 executive board that was so dedicated and worked hard to make these achievements possible,” MacKenzie said. “They have motivated us to continue setting our bar for success higher every year, and also reminded us of the importance of relationships, without which we would not be where we are today.”

MacKenzie also said that the awards wouldn’t have been possible without the award-winning leadership of Wallace. The award entry was submitted by Courtney Fogle, a GVSU alumna and former GVPRSSA podcast director of PR Hangover, which Wallace helps produce. The award celebrates faculty that are dedicated to their students in terms of support, mentorship and professional advice.

Fogle wrote in her submission that Wallace is a leader in the field who has dedicated her time to being a mentor, embodying passion and influence in everything she does. Wallace said that she was honored enough to be nominated, but winning only motivated her to further help the chapter in achieving its goals.

“Just the fact that the chapter nominated me for this award was flattering enough, but winning it, that was just over the top,” Wallace said. “I’m proud of everything that we do. We put on amazing programming, mentor peers, have a strong relationship with our parent chapter, win national awards that are usually reserved for much larger or older chapters, we’re selected to lead on a national level at conferences and initiatives, we train other chapters and I am as motivated to help them as they are to succeed.”

The University College Service Award was given to GVSU’s chapter for the integrated communications campaign done with GrandPR, GVSU’s student-run, nationally-affiliated public relations firm. The campaign entertained Sawyer’s Day, which was a themed event made to drive attendance to the GVSU men’s and women’s basketball doubleheader match in February 2019. Sawyers were chosen as a nod to GVSU history when the university nearly changed its mascot from “Lakers” to “Sawyers” in 1965.

The international awards follow a very successful year for the GVSU PRSSA chapter, as last year the chapter received four Pacesetter Awards, celebrated 10 years of their student-run firm’s national affiliation, won a Star Chapter Award and three Gold PRoof Awards. Wallace said that while awards and recognition are flattering and exciting, they aren’t the main goal that the GVPRSSA chapter strives for.

“We are not motivated by the awards, we are motivated by the impact that we have through our powerful student-run initiatives and creative programs which help turn out the best advertising and public relations students in the state,” Wallace said. “We’ll continue to innovate and contribute to our community in meaningful and impactful ways for as long as our membership will support it. Working with the most dedicated, brightest and best students makes me proud every day of our current student and alumni achievements, and the innovation and dedication by the board and chapter members makes this volunteer role worth all the hours invested.”