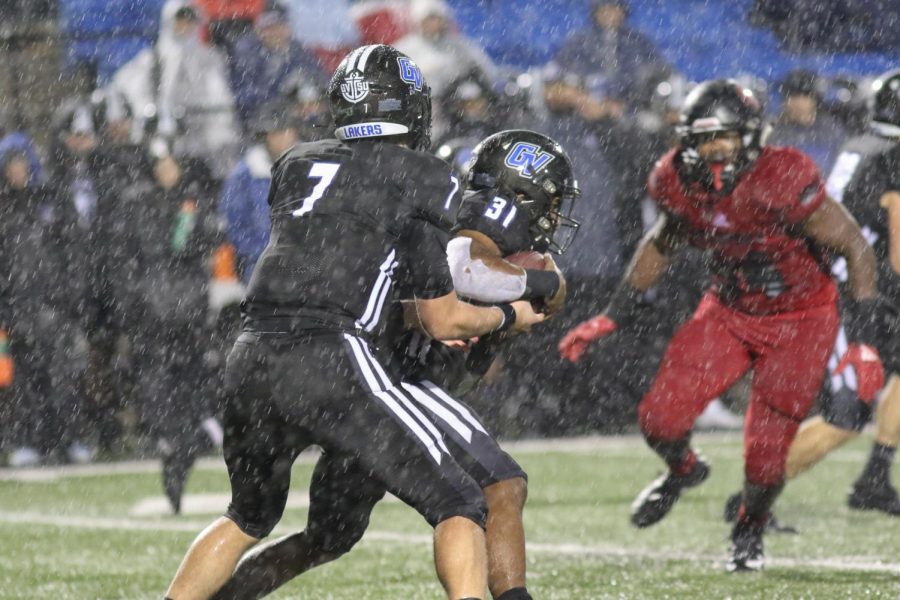 The No. 14 Grand Valley State football team traveled to Big Rapids Saturday, Nov. 9, and lost to the No. 2 Ferris State Bulldogs, 21-16. The loss brings the Laker record to 8-2, with no chance to get higher than second place in the GLIAC standings.

The Lakers had good momentum early, earning a 9-7 lead partially thanks to a 79-yard scoop-and-score by senior linebacker Isaiah Nkansah. Nkansah recorded the fourth longest fumble recovery in school history on that score.

Even after that large return, a key penalty on the kickoff gave the Bulldogs great field position for a quick touchdown to cut the margin, as GVSU led 9-7 heading into the half. GVSU coach Matt Mitchell said giving up that touchdown ended up being costly in the long term.

“That personal foul call on the kickoff leading to the touchdown hurt us quite a bit,” Mitchell said. “But what hurt us even more was having to punt the ball away to a team that had all the momentum.”

That momentum GVSU built in the first half was again halted in the third quarter, as FSU scored two touchdowns to take a 21-9 lead heading into the fourth.

Corralling two third-quarter Ferris State fumbles and junior Tyler Bradfield securing the first down on a fake punt helped give the Laker offense more opportunities in that second half.

The Laker offense didn’t do much with those opportunities, as junior quarterback Cole Kotopka finished the game only completing 10 of his 26 passes for 190 yards, throwing twice as many interceptions (2) than touchdowns (1).

GVSU couldn’t capitalize or come up with any points on the fumbles, thanks to more pre-snap penalties and punting in the second half than Mitchell cared for.

“Our defense gave us a lot of opportunities with those fumbles,” Mitchell said “But our offense couldn’t capitalize on them, and we need to be more efficient on offense if we want to keep winning football games.”

The Laker offense saw signs of life late in the fourth quarter, with Kotopka finding junior wide receiver Brandon Wadley again for a 62-yard touchdown, cutting the Bulldog lead to five points. Despite an inconsistent offensive attack, Wadley eclipsed the 1,000-yard career mark in the Laker uniform on Saturday.

It ended up being too little, too late, as a recovered onside kick by Ferris State secured the win.

Many players for GVSU were impacted by injuries in the game. The team-leading pass catcher in senior wide receiver Austin Paritee went down on the first offensive series with a leg injury after being knocked to the ground by a Ferris State defender on a blatant pass interference call.

Paritee wasn’t the only Laker hurt in the game, as junior Dennis Johnson came up hobbling after being chop blocked and left the game in the third quarter. Both starting corners, senior DaMario Johnson and senior Jaylen Moore, missed series in the second half due to cramping.

“Cramping was an issue that both teams were dealing with, but it hit us incredibly hard,” Mitchell said. “We got to get our guys healthy, look at the tape and get ready for a Wayne State team that is playing their best brand of football right now.”

The Lakers will finish their regular season at home Saturday, Nov. 16, as they host the 7-3 Wayne State Warriors. Kickoff is set for 1 p.m., and the seniors will be honored before the game.