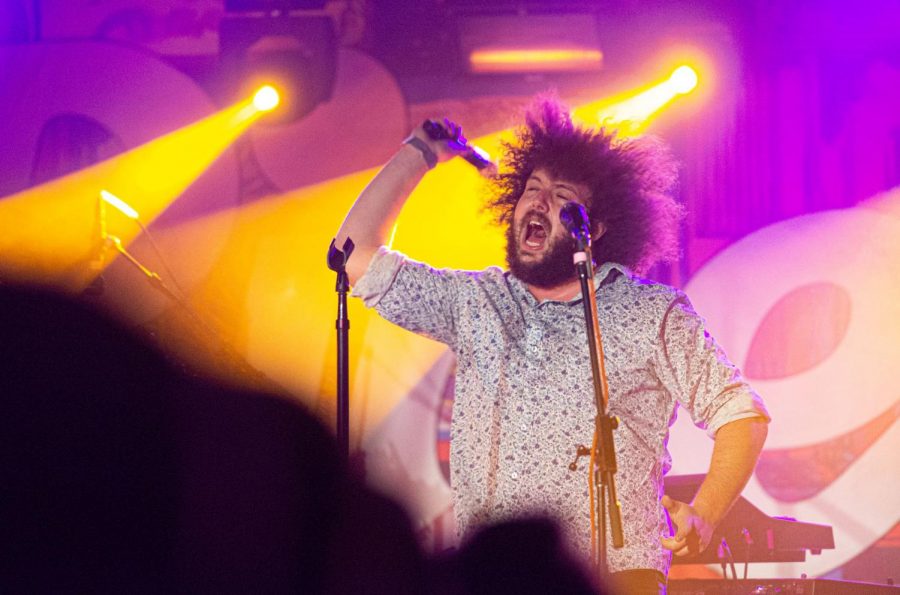 Within the walls of Elevation at the Intersection, Ripe vocalist Robbie Wulfsohn led the seven-piece band in a funky performance that submerged the crowd in a dome of positivity and openness.

The Boston-based band Ripe performed in Grand Rapids for the first time in their career Friday, Nov. 8. The seven bandmates, all raised in different corners of the United States and Canada, assembled as a musical force while enrolled at Berklee College of Music. Ripe was drawn to the Grand Rapids area because of their familiarity with bands whose early careers rooted back to Michigan, including Vulfpeck and Joe Hertler and the Rainbow Seekers.

Wulfsohn and his bandmates mesh brass instruments with electric guitars and wind instruments to create a funky sound that could not be pinned down to just one genre. Ripe includes Jon Becker and Tory Geisbar on guitar, Sampson Hellerman on drums, Nadav Shapira on bass, Calvin Barthel on trombone and Josh Shpak on trumpet and EWI.

Seven members in a band could potentially lead to conflict, however, Wulfsohn said they keep a solid dynamic by prioritizing the equal involvement of every member. One way they distribute work is by alternating who makes the setlist for each show.

“Having this many people all equally committed, all close friends and ready to take on whatever our careers throw at us, is nothing but a positive,” said Wulfsohn.

Wulfsohn said he believes a concert should provide fans with an experience they cannot properly replicate by streaming the songs at home. Along with reviving their streamable songs with improvisation and samples from popular music, they performed a song that is not available online, called “Recent Buddhist”.

“A concert is a place where ideally people all get together and feel close to the same thing at the same time, and you come into it for a hundred different reasons, but you leave with bridges built between you and the band and the other people who are also there for the band,” Wulfsohn said. “I think if we can take that space and build these values into that space, I can get excited about what could happen.”

Throughout the concert, Wulfsohn praised the energetic and merchandise-clad fans for their enthusiasm. Some fans in the crowd showed their Ripe pride by wearing green headbands.

In Ripe’s Spotify bio, it says “they are here to look at joy with the same depth as most people look at sadness.”

Elaborating on this defining theme present in their music, Wulfsohn said, “It feels like the methodologies of people, almost without realizing it, is to treat happy places as distractions and dark and intense places as the ‘real thing.’”

After providing examples of personal hardships, such as losing a parent or a job, Wulfsohn said looking at difficult life events through a different lens is important to the coping process.

“Those are the things that I think happiness needs to be best served, to actually bring you out of a dark place, not to just be the icing on top of an otherwise good day,” Wulfsohn said.

Ripe wrapped up the concert with one of their most popular songs, “Pretty Dirty (in the Fading Light).” This was one of the earliest Ripe songs and was first released in their debut EP, Produce the Juice. Wulfsohn said he was inspired to write this song after talking to his friends about their summer loves.

“Something clicked in me that everyone — at least the people in that particular conversations — were weirdly at peace even through a thing had ended,” Wulfsohn said.

The crowd was left with a similar kind of peace and positivity as the final encore closed the concert and they filed out of the venue, carrying along an experience that can not be streamed.