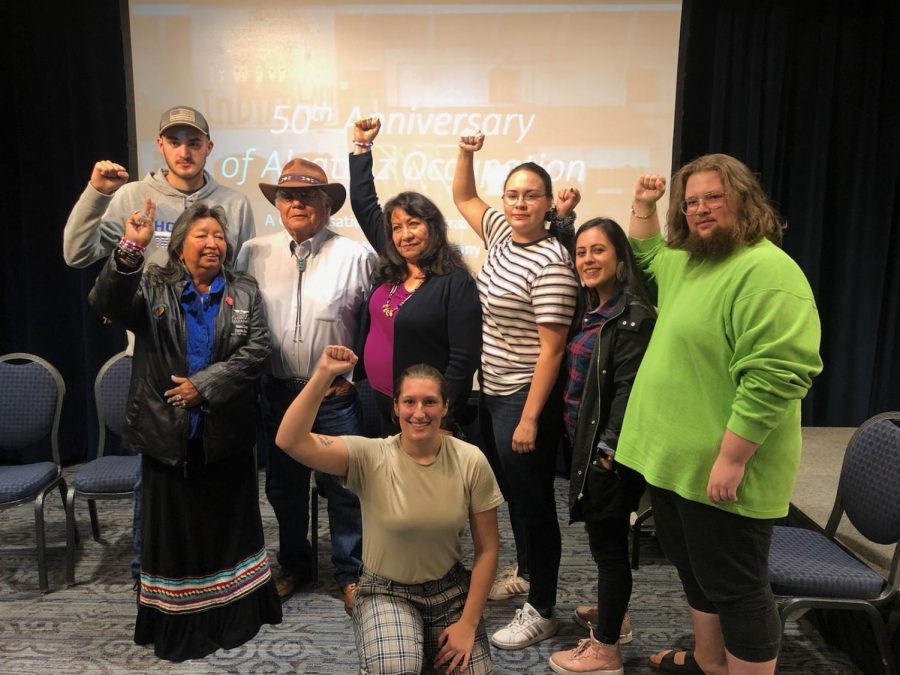 LaNada War Jack and Lenny Foster shared their experiences as Native American activists in the Grand River Room of the Kirkhof Center Nov. 4. Their activism extends 50 years back to the 1969-1970 occupation of Alcatraz.

“I think Alcatraz is actually very like a simile for how America is,” said Native American Student Association (NASA) vice president Brooklynn Lipponen. “It’s been colonized and taken over and pretty much turned into a prison for Native Americans.”

A video narrated by War Jack played during the event. She said Alcatraz belonged to the Ohlone, yet the United States occupied the island and turned it into a prison. War Jack said she was among 89 Native Americans who began the 19-month occupation of Alcatraz on Nov. 20, 1969. Here, the activists intended to address many violations of treaties by the U.S. government.

Once the video ended, Lipponen introduced the activists. She described the event as a way to learn outside the Eurocentric approach, so she can do decolonization work. After all, Lipponen said she attended the event since it provided plenty of awareness on Native American issues.

One such issue Foster described was the cultural assimilation resulting from government funded “Indian Residential Schools.” These were boarding schools with the guiding mission of “kill the Indian, save the man” that Native American children in the 19th and 20th centuries were forced to attend.  The students were prohibited from speaking tribal languages, being punished if they strayed from English, and forced to cut their braided hair.

Nixon ended the termination policy, or the government’s nonrecognition of certain tribes. Tribes without federal recognition lost their reservations. Nixon’s efforts extended to returning tribal lands to Native Americans, including Blue Lake to the Taos Pueblo.

“You can’t omit the Native American experience from our history and expect people to have a holistic relationship to the land,” said Division of Inclusion and Equity program coordinator Belinda Bardwell.

Native American activism relates to Grand Valley State University beyond its construction on tribal lands, Bardwell said. GVSU functions as a liberal arts institution that educates students on multiple perspectives. She said if the university does not continue to highlight indigenous peoples’ voices, much of their history will be missing.

Bardwell said there is often the question on what religion Native Americans have, yet she explained it is not so much a religion. Native American spirituality is their way of life, involving relationships with everything in existence and allowing natives to participate holistically in the environment.

Aside from discussion on activism, Native Americans practiced their cultures throughout the event. One group represented the Nottawaseppi Huron Band of Potawatomi, playing drums while singing in their native language. At one point, Foster spoke a Navajo prayer. He explained the prayer was to Mother Earth for all human beings, or “five-fingered people” as the Navajo call them. Foster said the term is meant to be nondiscriminatory, considering humans generally have five fingers per hand.

Native Americans conduct ceremonies at the start and end of everything they do, Bardwell said. She cited the Making Waves initiative as an example, for Bardwell said the program began unofficially with the water healing ceremony at Eberhard Center on Sept. 6.

“We want our students to understand the greater issues that are affecting our environment so that they become voices for the environment,” Bardwell said.

For GVSU students who attended the event, Bardwell said she hopes they gained a better understanding of the history and contemporary issues of Native Americans. Therefore, more activists may emerge to advocate tribal rights.

“It creates a sense of worth to my activism as well,” Lipponen said. “to think about the work that my ancestors have done and these two specific activists have done just alone. I think, in a way, I owe it to my people to pursue activism as I am.”