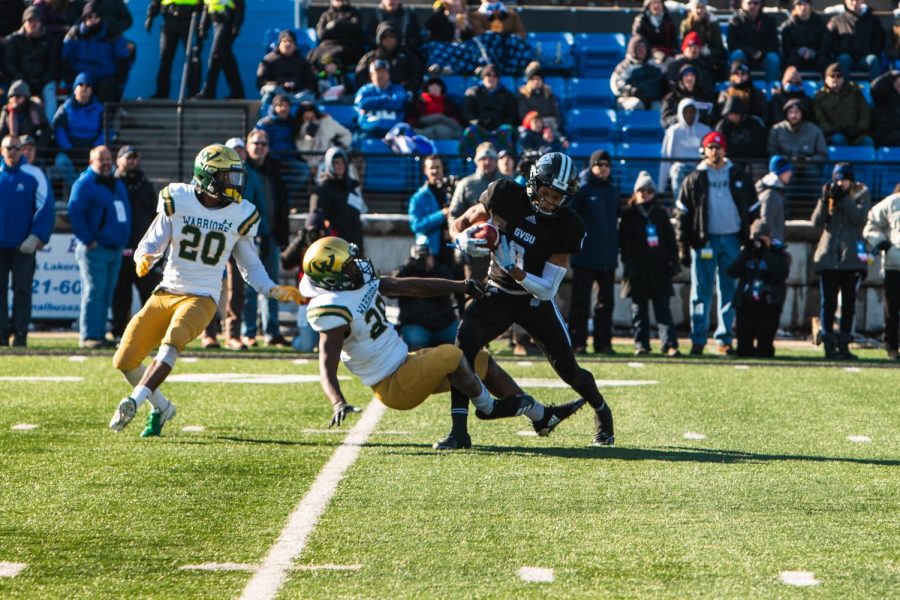 At this time two weeks ago, the 19th-ranked Grand Valley State football team looked primed for a playoff spot, as with an 8-1 overall record and being one Hail Mary away from being 6-0 in the GLIAC, it was a very reasonable assumption that the Lakers had a chance at hosting a playoff game.

With two big losses in the past two weeks, GVSU has pretty much kissed their playoff hopes goodbye, losing 21-16 at No. 2 Ferris State on Saturday, Nov. 9, before losing again at the hands of the unranked Wayne State Warriors, 31-17. After these two losses, the football team ends the regular season with an 8-3 overall record to go with a 5-3 conference record, which is good for fourth place in the conference.

“It was a disappointing way for our seniors to be sent out,” said GVSU coach Matt Mitchell. “In the second half, we couldn’t get any first downs offensively, and we couldn’t stop the run effectively enough. Give credit to Wayne State, they ran the ball much better than Grand Valley did.”

Mitchell hit the nail on the head when describing Wayne State’s path to victory, as the Lakers gave up 170 rushing yards and two rushing touchdowns. 159 of those yards and one of those scores went to sixth-year senior Deiontae Nicholas. While the GVSU run defense started out the first half in their usual stout fashion, that all changed when the Warriors started to get creative.

“In the first half we were doing a good job limiting their run game,” Mitchell said. “I think the thing that hurt us the most was some screens. They used tailback screens and wide receiver screens and we didn’t do a good job with their screen game. Down the stretch we weren’t physical enough, and there were way to many yards after contact.”

It wasn’t much better for GVSU on the offensive end. Their offense didn’t show a lot of versatility, as despite rushing for 159 yards and two scores of their own, the Lakers could never get it going in the passing game.

Before leaving the game in the third quarter with an undisclosed upper body injury, junior quarterback Cole Kotopka only completed four of his 13 passes for 105 yards. In fact, if you take out a 63-yard catch from Brandon Wadley that looked like an interception until the very end, Kotopka only threw three catches for 42 yards with a 25 percent completion percentage. While .250 may be an alright batting average, it is a pitiful number in the context of passing footballs.

Those putrid statistics are not his fault alone, as he was sacked six times and lacked any time to get his footing in the pocket.

“They brought a lot of pressure, and I think the thing we were trying to avoid is finding ourselves in a lot of third downs, and we did not avoid third downs,” Mitchell said. “They t’ed off on us and got after us. Some of the routes took a little bit of time to develop for the quarterbacks. We didn’t protect the quarterback well at all.”

While many college students struggle to do homework on the weekends thanks to hangovers, a similar thing may have happened to the GVSU football team, as Mitchell felt the team couldn’t bounce back from last week’s loss in the Anchor Bone classic.

“I think we struggled to get over the Ferris State loss,” Mitchell said. “We were pushing and fighting and scratching and clawing all throughout the course of the week, we didn’t come out in attack mode from the get-go. We weren’t aggressive enough.”

Barring a surprise decision from the DII football playoff committee, this will be only the second time in five years that the GVSU football team fails to earn a postseason game.