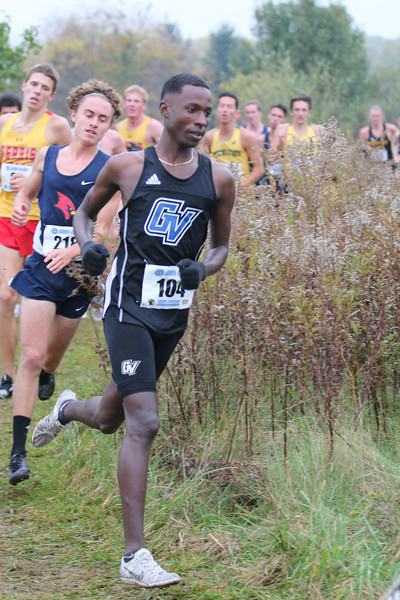 Dennis Mbuta is a junior at Grand Valley State University this year and joined the cross country team his freshman year to try out his abilities on the long courses. Just this year, he decided to take his skills to the scoreboard and is now running every meet as well. His first two years he ran for the fun of it, and now this year he is running to win.

Mbuta is always running around campus, either practicing for the weekend meets or clearing his head to relieve the stress of classes. He said he has loved running since high school, but his forte is track and field. Running is like an escape for Mbuta and he loves to be a part of the cross country team at GVSU.

“I started off in track sophomore year of high school and switched to cross country senior year,” Mbuta said. “Track-and-field is my main focus, so I want to look for a team after graduation.”

Mbuta said his experience with running has been really positive thus far, and his favorite part about the cross country team at GVSU is the friendships he has made, and getting to share moments of successes and failures with his teammates.

“Its a fun experience, just like living with everyone on the team and practicing with them,” Mbuta said. “It’s a fun environment to be in, and has helped me socially outside of school. It’s something I can focus on and take the stress away.”

Mbuta is recovering from an injury this week but plans on racing this upcoming weekend at nationals. His personal goals for this season are to finish on the podium, setting the team up in the top four in the country. With all the new recruits this season, Mbuta said it will be really exciting if they can pull it off again this year after their first national championship win last year.

“My favorite race this season was conference,” Mbuta said. “Everyone had a good race, we all set personal records across the field. None of us went under 25 minutes except for Tanner Chada, and that was a great moment for the team.”

The sense of family on the cross country team has really helped Mbuta find his place at GVSU and he’s excited for next season. He loves improving and helping each other out, and sharing the moments like the conference race together. And with every new season comes new recruits and incoming freshman, who Mbuta has some advice for.

“The biggest thing is to stay focused,” Mbuta said. “I’ll be honest, my running in my college career has helped me when everything isn’t working out as well. Staying focused helps me to stay motivated and just seeing my results coming in. Class wise, it’s a stress reliever even just being outside of the classroom. For me, it’s either running or hanging out with friends and it’s a huge stress reliever.”

He would highly encourage any aspiring runner to try out cross country and has enjoyed every minute of his time on the team. Mbuta said he is looking forward to nationals next weekend in Sacramento, California, which the team will be leaving for on Wednesday in preparation for their biggest debut this season. He’s hopeful for a successful race on Saturday, Nov. 23.