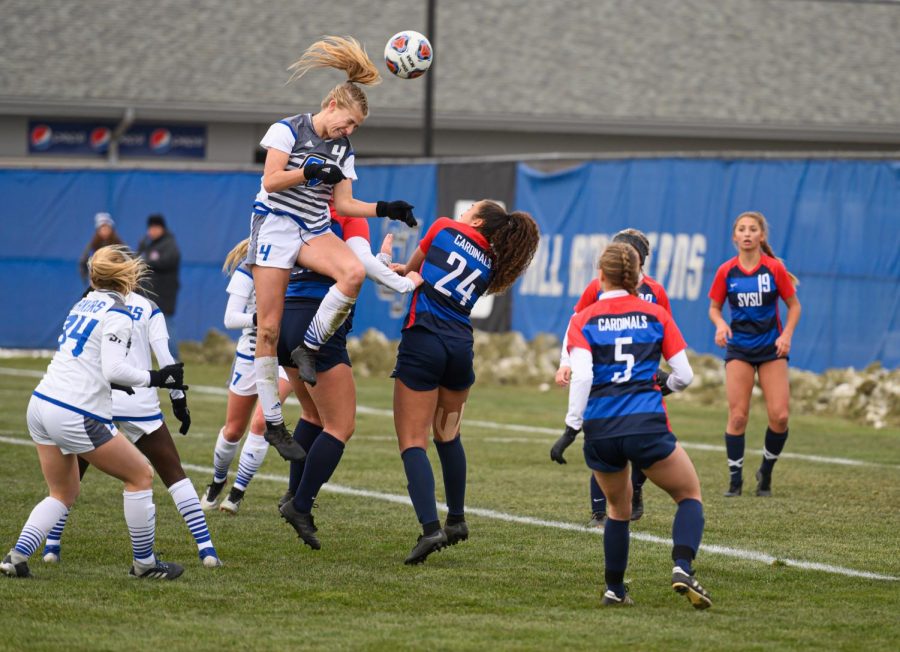 The Lakers advanced to the GLIAC Tournament championship match with a 3-0 semifinal win over the Ferris State Bulldogs Friday evening at the GVSU Soccer Field. The Lakers improved to 18-1 on the season, claiming their 16th shutout of the year.

Ferris State got off to a fast start by consistently controlling the ball on GVSU’s half of the field for the first 18 minutes of the game, which allowed them to launch 3 shots and two on goal. Both shots-on-goal were stopped by goalkeeper Jessica Radice.

“We had to play a lot harder from the opening whistle than we did,” said GVSU coach Jeff Hosler. “Ferris is out there fighting, trying to extend their season and we didn’t match their energy early on.”

The Lakers settled things down with the go-ahead goal in the 21st minute when junior forward Ava Cook centered a ball for senior midfielder Riko Sagara, who played it through for freshman forward Chantel Carranza to put the ball into the back of the net for the lead.

“My teammates have been doing a great job all year of setting me up in good situations and spots on the field,” Carranza said. “Playing with some of the best players in the country has constantly helped me improve and it shows with every goal out there.”

Next, Sagara provided a brilliant cross in the 30th minute to set up Carranza for her second goal of the night and the Lakers took a 2-0 lead into halftime.

“We knew when Chantel committed to us that we had a special player on our hands,” Hosler said. “Once she settled in, she’s been on a tear. She’s got a real good feel for the game and knows how to put herself in dangerous situations.”

Late in the second half, junior midfielder Darline Radamaker lofted a ball over the Bulldogs back line and Greta DeLoach took advantage, hammering home the dagger to complete the scoring for the Lakers.

“Before I shoot, I pick out a spot and try to place it there with some pace and hope that it goes in,” said DeLoach. “It was a great ball in by Dar’ and I was able to finish it.”

The stage was set. The weather was standard for November in West Michigan, and GVSU came away with a 4-1 win to earn their 13th straight GLIAC Tournament championship, even though the Lakers got off to a start that was about as cold as the weather outside.

Shortly after the opening kick, Saginaw Valley State blitzed GVSU with a goal in the first minute, a rocket from SVSU junior forward Sakura Bals that came on an assist from senior defender Jennifer Muana. Bals beat her defender easily, then blasted the ball home to give SVSU the early edge, 1-0.

The scoring ended there and the rest of the half was marred by sloppy ball possession and physical play on defense, as both teams dug in and went back and forth until the halftime buzzer sounded.

GVSU came out of the locker room in the second half like a shark who smelled blood.

“It was special coming out into the second half,” said junior forward Ava Cook. “We had never been in that position before this year and that just shows where special teams can grow.”

If being down going into halftime had any negative effect on GVSU, it did not show once the second half kicked off. Senior forward and tournament MVP Riko Sagara took the corner and placed the ball on a line in front of the far post where Cook dove and pushed a header past SVSU goalkeeper Allison Watts to tie up the score, 1-1, in the 48th minute.

“Our set pieces have been an area of focus for us to improve lately and obviously any goal in that type of situation is going to get us pumped up,” Cook said. “Riko placed the ball well and I kind of just made a courageous dive at it and it went in and then I ran to the bench to celebrate.”

GVSU’s next goal came seven minutes later, courtesy of DeLoach, when she tipped the ball up and over Watts before colliding with the goalkeeper on a runaway 1-v-1 to permanently give the Lakers the lead in the 55th minute.

Feeling the energy rise, GVSU continued to capitalize. Sagara got in on the scoring action thanks to an assist combo from Carranza and Lauren Ross that gave Sagara the opportunity to punch the ball into the upper left hand corner of the net to move the score to 3-1 in favor of the Lakers.

“Riko is very smooth on the ball, which makes it very hard to defend her because you never know where she’s gonna go with the ball,” Cook said. “She’s also kind of a silent killer. She’s not going to give you the ra-ra but she is going to get people hyped up through her play.”

Sagara put the icing on the cake in the 70th minute when she blasted home a rebound off of a shot from Ava Cook. The ball landed neatly in front of Sagara, who collected, and sliced the ball into the left-hand side of the net past Watts for GVSU’s fourth and final goal of the day.

GVSU will find out their first round opponent in the NCAA Tournament during the NCAA selection show that airs Monday, Nov. 18 at 6 p.m.