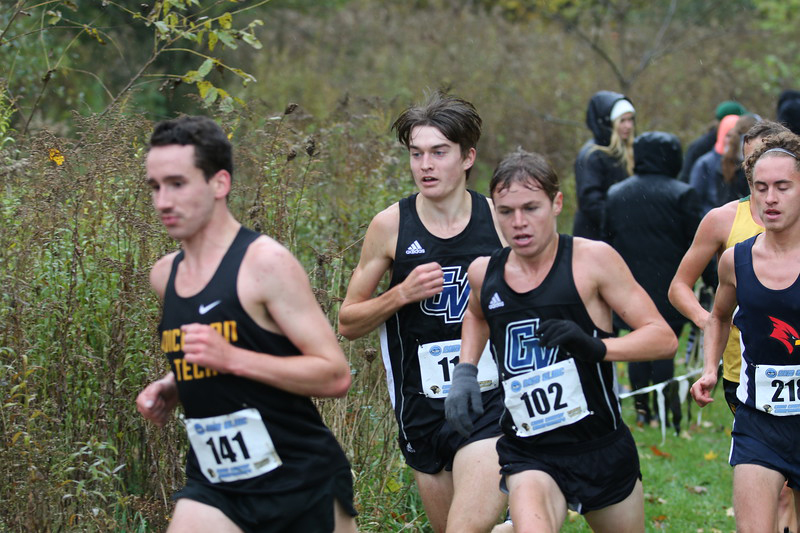 This past Saturday, the Grand Valley State men’s and women’s cross country teams ran the NCAA National Championship race in California. The women finished up the season in second place and the men finished fourth place in the country.

On the women’s side, senior leader Allie Ludge took 12th place in the women’s 6k with a time of 20.34.1, followed closely by Hannah Groeber in 14th, Jessica Gockley in 18th and Klaudia O’Malley in 24th. GVSU finished in second place right behind Adams State with a score of 87, beating out the Colorado School of Mines in third.

“It was a solid effort and we ran fairly well,” said GVSU coach Jerry Baltes. “At the end of the day, we could’ve ran perfect and still wouldn’t of beat Adams State — they were outstanding today. I thought overall our ladies did what they needed to do to be the second best team in the country and I’m very, very proud of all our women.”

On the men’s team, sophomore stud Tanner Chada finished in 24th place with a time of 30.20.8, followed by Noah Steffen in 27th and Ben Zaremba in 34th. GVSU placed 4th in the nation for the men’s 10k race with a score of 177, right behind the Colorado Mines, Adams State and Chico State.

“Fourth place, getting on the podium is a very positive day,” Baltes said. “Both our men and women competed hard. They’re incredible groups.”

Baltes touched on the disadvantages they faced this weekend, going up against some of the best cross country team in the nation in unfamiliar territory and why that might’ve hindered their overall success on the course.

“Everyone thinks California is the perfect condition coming from Allendale, but coming out here in the sun and 60 to 70 degree weather was less than ideal for us in the big scope of things,” Baltes said. “When you set high expectations for yourself and for your team, it’s hard to win a national championship and finish where you want to be. I told them you have to appreciate what we have, be proud of what we did, and if you can learn from it, you’ll come back stronger. When you’re disappointed in being the second or fourth best in the country, I think it says a lot about who you are and how you approach your passion and goals, and the purpose you have in racing.”

Reflecting back on the race, Jessica Gockley, Hannah Groeber and Allie Ludge fought the hardest and battled their way through some of the toughest competition they’ve seen yet this season. The two freshman women, Klaudia O’Malley and Natalie Graber, had very strong races as first timers today, proving themselves as outstanding members of the team.

Steffen was the highlight of the men’s race since he started from the back and kept moving up until he landed in 27th, and Tanner Chada fought really hard to be up in the front of the race with all the opponents. Finally, Andrew Hylen, a true freshman, showed up to show off, and Baltes counts all these amazing performances as wins.

Looking forward, all of the runners on the cross country team will be starting their indoor track and field season in two short weeks. Coach Baltes said that they’ll be taking a deep breath after this weekend over the Thanksgiving break, but coming back strong and ready to go in preparation for the next winter sport season.