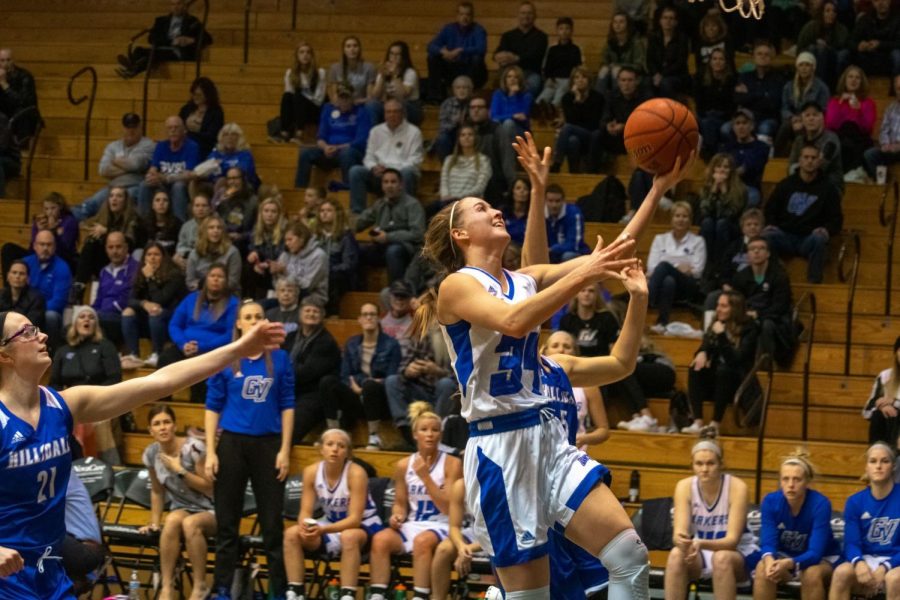 The Lakers started the game slow on offense and defense. After Hillsdale went on a 9-2 run to start the game, the Lakers clamped down on defense and came alive on offense.

Senior forward Maddie Dailey grabbed a rebound off a Hillsdale miss, and quickly made a put back jumper. On the next possession, she had a shot fake at the top of the three point line and drove in to score a tough layup. Dailey finished the game with 11 points, 7 rebounds and a block.

Later, senior guard Victoria Hedemark was assisted on a corner three to give the Lakers a 10-9 lead. She finished the contest with 7 points, one block and a steal. Senior guard Jenn DeBoer got a rebound on the defensive side and took it all the way to the basket on the offensive end to end the first quarter with a Laker lead, 18-13.

The Lakers tough defensive play continued into the second quarter. GVSU held Hillsdale to a mere 6.7 field goal percentage in the quarter and only allowed two points. Boensch stood out in the 2nd quarter, showing her play-making abilities. Almost every time she got the ball in the low post, she was either double or triple teamed. The leading scorer for the team so far this season was able to find open teammates through Hillsdale’s tough defense on her. She had two assists in the quarter, both of them three pointers.

“Coach said before the game that I was going to be doubled or even triple teamed in the low post,” Boensch said. “There were a few times where I tried to put the ball on the deck, and it wasn’t what I should have done. All in all I know I had open shooters around me. If they were going to double me that hard, I was going to have to find them with my passes.”

Going into the second half of the game, GVSU’s defense remained strong against Hillsdale. They only allowed six points for the third quarter and started the half on a 10-0 run, and didn’t allow a basket until half way through the quarter. Dailey went off in the third, scoring a total of seven points in the quarter.

One of her most impressive plays was stealing a pass from a Hillsdale guard and taking it coast-to-coast for the transition layup. The Lakers scored 23 points of turnovers, and Dailey finished the game with five steals. Boensch scored the first eight points of the fourth quarter for the Lakers. GVSU’s defense only allowed Hillsdale to score four points in those ten minutes. The Lakers defense held Hillsdale to 17 percent shooting for the entire contest.

“We did a good job getting into shooters space on shots,” said head coach Mike Williams. “Even when they did get penetration at the rim, we had someone like Cassidy Boensch to protect the paint.”

The Lakers take on Central State University in Ohio Nov. 27, and will try to remain undefeated.