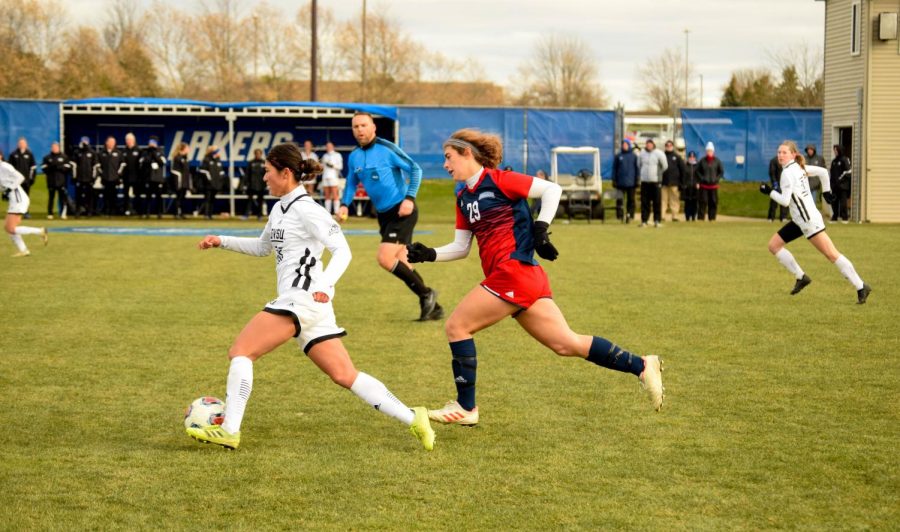 Both wins were lopsided affairs for GVSU, who beat their two opponents combined by a score of 11-1 (the one goal against being an own goal against USI) with 80 shots and 38 shots on goal total compared to just 3 shots and 1 shot on goal combined by their opponents.

The Lakers opened the NCAA Tournament with a convincing 7-1 win over the Southern Indiana Screaming Eagles Friday, Nov. 22, in the Midwest Region Quarterfinals at the GVSU Soccer Field. The Lakers improved to 20-1 on the season and advanced to Sunday’s regional semifinal against 5-seed McKendree.

“Sometimes it’s a big play or a big tackle that gets everyone else going and I just kind of take it upon myself to do that,” said Cook when asked how she steps up her game up in the postseason. “You have to have big plays and big moments and it’s that kind of mentality that takes over in my mind when we take the field before the first kick.”

GVSU took an early lead in the 5th minute on a passing combination from Cook on the wing through Sagara, who slid the ball across the front of goal for Baron, who slammed the ball home. DeLoach would score in the 10th minute – which would prove to be the game-winner – when Cook and Carranza combined to set her up.

GVSU coach Jeff Hosler was pleased with the depth that has developed for the GVSU attack and highlighted DeLoach, who has stepped up to make a difference on offense for the Lakers.

“We obviously have some elite goal scorers in this group, but it continues to be a well balanced attack,” Hosler said. “Greta is one of those players that has grown a lot over the last few weeks and has made herself dangerous in all phases of our attack.”

Cook would score the next two goals to round out the first-half scoring. In the 14th minute, she stole the ball off a goal kick by USI, shook her defender, then smashed the ball into the corner netting to add to the lead. In the 21st minute, Cook would score off a set-up from Sagara on a well-angled through ball to make it 4-0 at half.

The first half explosion from the Lakers marked a decidedly different energy than they had in the first half of their previous three games, one in which, against Saginaw Valley State, they trailed at halftime for the first time all season. Hosler was pleased with his offense’s turnout in their first game of the NCAA Tournament

“For some reason, we’ve been in a funk to start matches the last couple weeks,” Hosler said. “But there are some ways that the NCAA tournament reinvigorates our group every year, and I think that’s what we saw today.”

USI would score on a GVSU own-goal in the 51st minute. but the Lakers got it back and then some with two goals in a 20-second span in the 66th minute with Carranza and Sagara each pouring in a goal. Baron would split the defense and strike the back of the net in the 81st minute to round out the scoring.

The victory cemented another 20-win season for the Lakers, who have now won at least 20 matches in 13-straight years.

“Do they actually want to score?” a fan in the GVSU stands muttered aloud in the match with McKendree two days later.

From the opening kick, McKendree University looked tentative and uneasy, as the Bears often booted the ball upfield and retreated to set up their front line as a third layer of defense, as opposed to pushing the ball further down the field to attack the GVSU goal.

The result was a condensed area in front of McKendree’s goal that featured tight passing windows, ricocheted balls and small stretches of rapid-fire shots peppered toward the Bears’ goalkeeper.

After a handful of shots that featured a pair of saves by McKendree goalkeeper Zoe Brochu and a yellow card that was issued to McKendree’s bench in the 22nd minute, GVSU settled in and began to open up the scoring in the first half.

Carranza gathered a loose ball in the 23rd minute on the front right side of McKendree’s goal before jetting around her defender and lofting it diagonally up over the goalkeeper to give GVSU the early 1-0 edge.

Sophomore Gianna Parlove scored next in the 40th minute via a through ball slated in by junior defender Cece Steinwascher. Steinwascher skipped the ball past two defenders to hit a streaking Parlove, who unloaded a low line drive diagonal across the goal that snuck just inside the near-side post and concluded the scoring for GVSU in the first half.

Three minutes into the second half, Carranza went on to add another goal in the 48th minute. Carranza gathered a ricocheted pass directly in front of McKendree’s far post before easily tapping it in for the Lakers third goal of the day.

Freshman forward Kennedy Bearden would score GVSU’s capper in the 86th minute. Junior defender Sydney O’Donnell lofted a pass from the right corner of the box that found Carranza who headed the ball back to Bearden in front of center net for the tap-in and final score.

With the victory, the GVSU Lakers advanced to the NCAA Midwest Regional final that will be held Friday, Dec. 6.