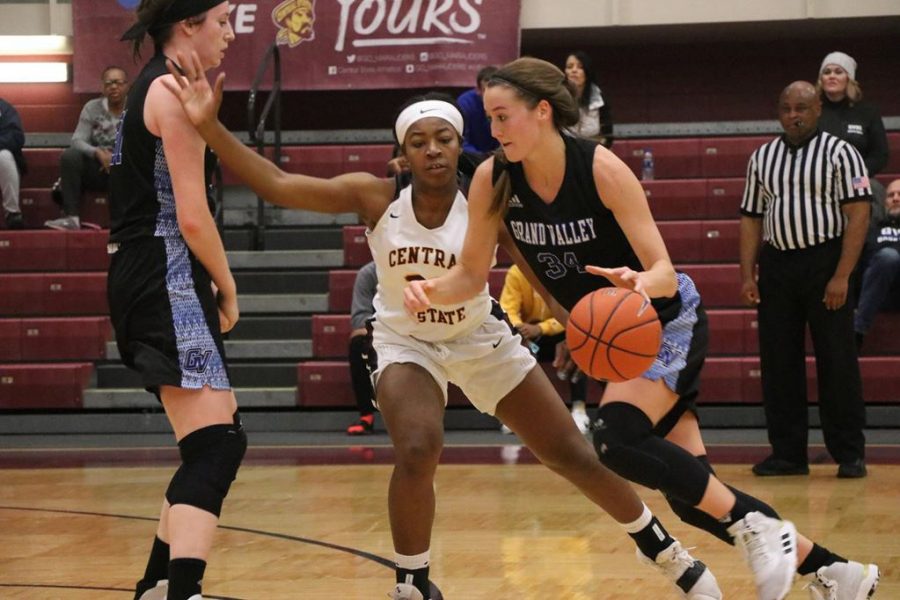 The Grand Valley State women’s basketball improved to 6-0 on the season earlier this week, defeating Central State University 80-54 Wednesday, Nov. 27. Coach Mike Williams said he was pleased with his team’s performance in the blowout win.

“I thought our kids locked in the game plan that we talked about,” Williams said. “We started to separate in the second quarter and did a great job limiting them getting in the paint. Central State is tough to play at their place. They’ve played a lot of good teams and we knew coming in that they were going to put up a fight and they did.”

When asked about the keys to the win, Williams cited not letting Central State get second-chance points and limiting them from getting points in the paint.

“We did a great job moving the basketball and not turning it over,” Williams said. “We got some offensive rebounds as well, and that’s how we were able to separate by 28 or 30 points by halftime.”

Although they didn’t have the most impressive performances on the score sheet, Williams said Victoria Hedemark and Taryn Taugher both had good games. Hedemark notched 13 points, two steals and seven rebounds in 32 minutes — the most on the team. Taugher only scored seven points, but totaled 10 rebounds, with three on offense, in just 24 minutes of action.

“Victoria and Taryn both did a great job on the glass,” Williams said. “They got down around the basket and had some strong takes to get us some easy looks down there.”

Although they took care of business on Wednesday, Williams still has some things he wants to clean up before they start conference action.

“Our kids are very responsive and are willing to change, it’s our job as coaches to identify what needs to be improved and change some of those things,” Williams said. “However, as a group I think our young kids off of the bench are growing every day, which is good because that’s going to allow us to be a deeper team down the stretch. We haven’t played an overly-taxing schedule, but it feels good to be 6-0 heading into Thanksgiving break.”

The team doesn’t have many weaknesses, but Williams noted toughness as his biggest concern. It’s not that the team lacks toughness, but that they just haven’t had the need to show it yet. With all of their high margin wins this year, they haven’t been forced to grind through a tough game, Williams said.

“On the other side, we need to be a little tougher for the top-level teams that we’re going to play in our conference,” Williams said. “Also, we need to work on our decision-making on offense as well as doing a better job of keeping people away from the rim on defense.”

Williams laughed when asked if there was a game left on the schedule that he has circled. Instead, he gave an answer reminiscent of New England Patriots head coach Bill Belichick.

“The next game, baby,” Williams said. “We don’t look ahead; the next game is always the most important game on the schedule. Our kids are very good at focusing on what’s in front of them and I think that’s the reason we’ve been a consistent team over the last five years.”

GVSU Women’s Basketball continues their undefeated season at home as they welcome the Parkside Rangers to the GVSU Fieldhouse Arena Dec. 6 at 6 p.m.