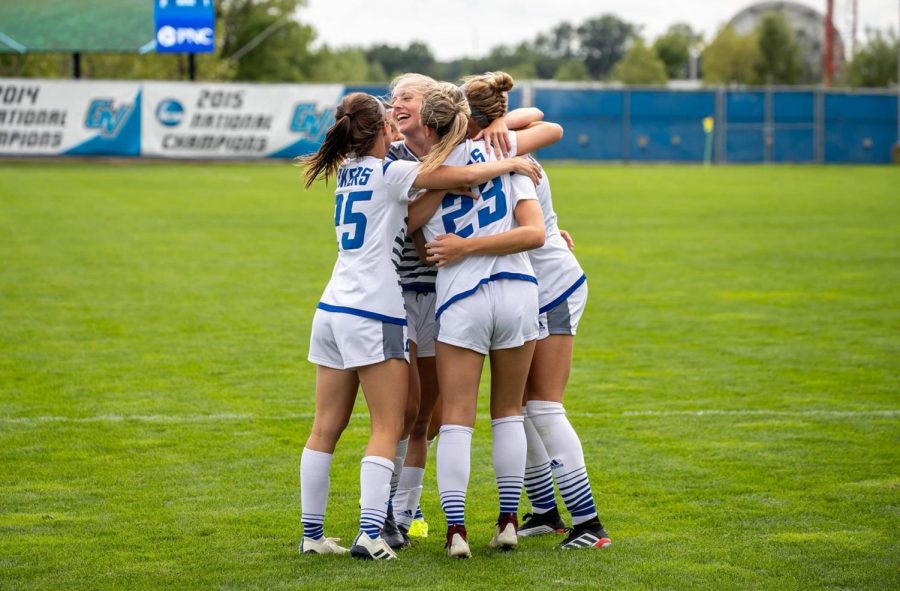 When it comes to soccer for Grand Valley State University defender Sydney O’Donnell, the sport has been a centerpiece in her life from a very young age.

“I started playing soccer when I was 3 years old,” O’Donnell said. “It was the first sport I ever picked up and I loved it from the very beginning.”

Not only did she love the game, but she quickly developed a talent for it as well. Growing up on the east side of the state in Novi, Michigan, O’Donnell’s first experience playing organized soccer was on all-boys teams early on.

“I actually played on an all-boys for several years when I was a kid,” O’Donnell said. “I really enjoyed the competition and I think it helped me develop and prepare for soccer later on.”

Once O’Donnell got to high school, she began playing club soccer for the Michigan Hawks, one of the Midwest’s premier club soccer teams that plays on the Elite Club National League (ECNL) circuit. It was there that O’Donnell established herself as a prominent prospect and began to receive scholarship offers from around the country.

“I was able to travel the country with the Hawks and be scouted by various programs around the country,” O’Donnell said. “Looking back on it, it was really intimidating but I loved playing in the program and having the opportunities it gave me.”

However, those opportunities didn’t directly lead to playing soccer at GVSU, or even playing her current position at left backer. Once upon a time, O’Donnell was on the front line, making plays for the Vanderbilt Commodores in the SEC as an up-and-coming forward.

“I initially chose Vanderbilt because I wanted to challenge myself at a top 20 academic school while also having the ability to play soccer at a high level,” O’Donnell said.

In her lone season as a Commodore, O’Donnell excelled, scoring 3 goals and assisting on another 10 in 19 games as a freshman. But O’Donnell soon came to the realization that the culture of this high-end academic university was not for her.

“Going in as a freshman, I spent a lot of time on the soccer piece and not on what I wanted to go to school for,” O’Donnell said. “I really wanted to go into nursing and being so far away from home, felt homesick, so I decided to make a call.”

From there, a change of scenery was in order for O’Donnell and she sought to find another university closer to home that matched her academic interests and provided an excellent soccer team to play for. Enter Grand Valley State.

“I called Jeff, our head coach, because he knew me throughout my whole recruiting process while he was at Alma and I really looked up to him as a coach,” O’Donnell said. “Grand Valley also has one of the most competitive nursing programs in the state, so those two pieces were really important for me in coming home and playing at Grand Valley.”

O’Donnell made the leap from Vanderbilt to GVSU and caught on from the get-go. The sophomore defender started in 22 games during her sophomore season and first campaign with the Lakers, notching two goals and nine assists on 38 shots, 13 of which were on goal.

“I knew coming in that I would be competing for that outside back position because Ava was already out there playing the position I originally played at Vanderbilt,” O’Donnell said. “Jeff saw me as a good fit in that position and had confidence in me being able to contribute there despite me not having much experience as a back.”

“She’s a great weapon for us, she can take players on one versus one, she’s a great ball striker that can also deliver balls and thats something that’s shown up a lot lately out on the field,”  GVSU Coach Jeff Hosler of O’Donnell after a regular season match against Northwood on Oct. 25.

O’Donnell said that forward mentality has helped give her team that added edge when attacking the opposing net.

“I think it confuses the other team a lot because they’re not used to an outside back getting up,” O’Donnell said. “I can speak for myself because I was a forward, forwards don’t like to defend, so when you pull their forward all the way back to their own net, they lose that attacker on offense and get frustrated too.”

In year two as a Laker, O’Donnell has continued to improve on that approach as an offensive-minded left backer, having started 22 games while notching 15 points with four goals and seven assists going into this Friday’s matchup with University of Indianapolis for the NCAA Midwest regional championship. O’Donnell had 13 points total all of last season.

O’Donnell attributed that growth that she has experienced as a player to her coaches.

“I’ve had great coaching around me ever since I’ve been here,” O’Donnell said. “I think they have contributed significantly to the season that I’ve had and being able to buy into their coaching points and see the improvement in myself has been a big part of why I have been able to succeed this season.”