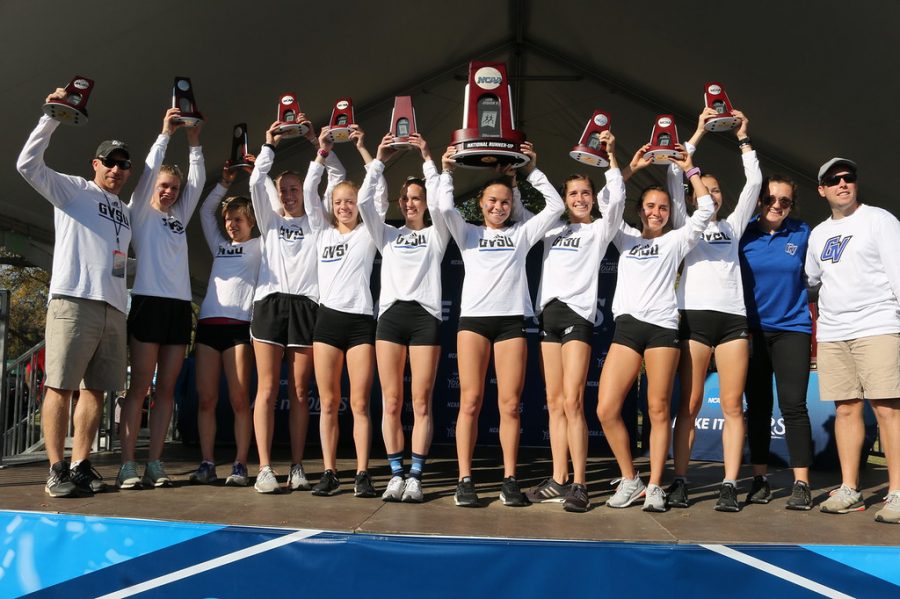 Update: Photo was updated to more accurately reflect the story

Head coach Jerry Baltes is on his 21st year of coaching men’s and women’s cross country and indoor track and field at Grand Valley State University, and has trained over 200 athletes during his time here. After six NCAA National Championship titles for his women’s cross country team and one for the men in the past decade, the team has the honor of being named the most dominant team of the decade in cross country by the NCAA.

“It says a lot about the tradition we’ve built and the student athletes over the years being in a good position to compete at a high level,” Baltes said. “Its certainly an honor and cool to be recognized for that.”

Baltes credits the student athletes he’s worked with in the past decade because of their dedication to the team over themselves individually. With over 200 athletes to recruit and groom, it’s a tough job to be able to so consistently take a team to the national championships, and Baltes has successfully managed the task seven times in the past ten years alone.

Having won so many national championships in the past, Baltes knows exactly how to approach next season and where to start back up again with a bunch of new recruits. His plan is fairly straight-forward: starting with recruiting promising runners and students that are willing to put the time in for another championship title.

“I think the biggest thing is just recruiting the right student athletes,” Baltes said. “They put the team ahead of themselves individually and are willing to work hard and put the time and effort in to get better. That starts with working hard and doing things the right way time after time, and if we do that we’ll be in a position to win a few more down the road.”

As far as the athletes that Baltes has had the pleasure of training, he’s seen many students come and go, now most of them off in the world doing great things. The memories all the teams have built together and the time spent as a family makes for a proud moment in every season, and it doesn’t always have to mean a national championship title.

The opportunity to work with such talented students and be a part of their journey through college is one of the most important times in some of these kid’s lives. Baltes has certainly made an impact on their careers as runners and shared a part of each and every one of their lives. Having won so many awards and titles, at the end of the day it’s important to appreciate the little things and Baltes has appreciated every student athlete that has joined his team.

“I think that it’s a perfect time to talk about being grateful and thankful for all the runners that have come through our program and worked so hard to allow us to have the success we’ve had,” Baltes said. “Certainly proud but even more so grateful.”

Baltes and his team are in the midst of preparation for their indoor track and field season starting in a few short weeks, coming off of their championships last weekend in California. After enjoying the holiday weekend its back to training for the runners and on to another great season.