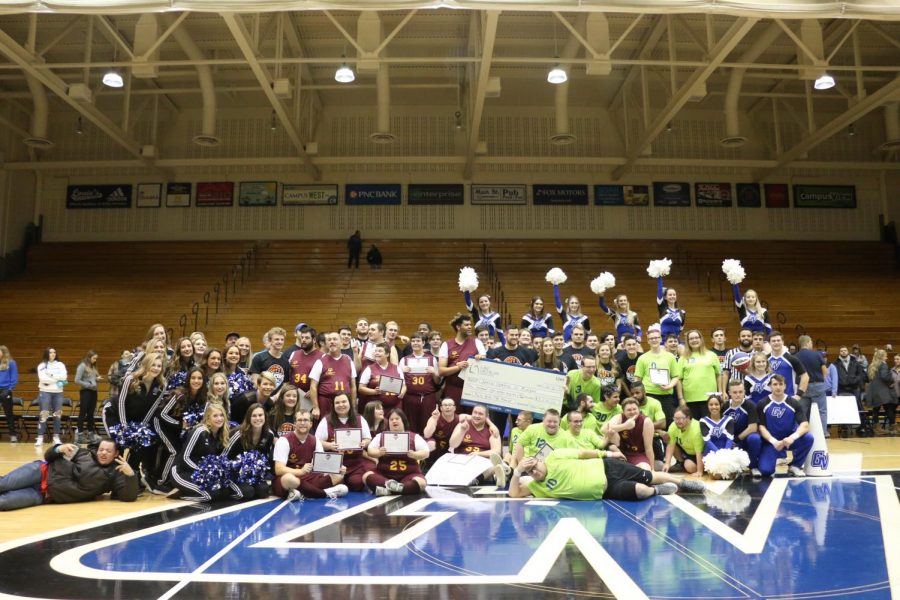 The special olympics athletes and students in Dr. Coles class stand with the check following the 2019 Rally for the Rapids game

Once again, students, Greeks, athletes, parents, coaches, and local fans came out to support Special Olympics basketball players from Area 5 (Ferris State) and Area 12 (GVSU) in what is one of the biggest highlights of the winter sports season at Grand Valley State University.

Armed with another talented and dedicated group of undergraduate students who successfully organized the event, Grand Valley State University professor Jon Coles helped guide his students through planning an event that raised $3,842.53 for local area Special Olympics, $579.74 more than was raised a year ago at the same event.

Rally with the Rapids is a once-yearly organized Special Olympics basketball game between players with special needs from the Allendale and Big Rapids area. Area 5 and Area 12, as mentioned above, are their Special Olympics designated sectors of the state.

Planning for the event is extensive and begins right away at the beginning of the semester. Coles immediately lays out roles and jobs that need to be filled by his students, who then choose amongst themselves who should do each job.

“I teach the class and help guide them, but the students deserve all of the credit when it comes to this event,” Coles said. “They’re an extremely dedicated group of kids who have put their all into this event and it showed out there tonight.”

In terms of logistics, there are multiple layers to coordinating an event of this magnitude. Students have to contact local companies for sponsorships, coordinate with GVSU Event Services, the cheerleading team, and dance team to find an appropriate date to reserve the fieldhouse, reserve all of the proper electronic equipment to run a basketball game, find referees, cater the event, raise public awareness of the event to attract attendance, raise money for donations, and more.

“There’s definitely a lot that goes on behind the scenes, but that’s the beauty of this class,” Coles said. “Everyone’s super motivated because at the end of the day, every single one of the students wants to put a smile on the face of every single athlete from areas 5 and 12 and give them an experience they won’t soon forget.”

The experience was indeed one that will not be forgotten anytime soon, whether it be by the athletes on the court or those in attendance off of it. The players on the court made sure of that.

Shortly before the game started, Area 5 center Kim Kenyon sang an inspiring rendition of the Star Spangled Banner, then the starting lineups were announced and the action got underway.

GVSU and Ferris State got off to a quick start to open up the first quarter. Area 5 Small forward Nick Borders, power forward Matt Schlarf, and Kenyon each poured in a bucket to give the Bulldogs 6 points in the first two minutes of the ballgame. Area 12 starting point guard Robert Taylor-Lezman score 2 baskets early on to help GVSU keep pace with Ferris State as the score remained 6-4 in favor of Area 5 moving past the halfway point in the first quarter.

From there, Borders showed his offensive expertise in the closing minutes of the first quarter, hitting a driving floater in the lane shortly before using a pick for a pull up mid ranger that hit nothing but net from 15 feet out on the right wing. Combo guard Tyler Kohley would add another bucket for GVSU as the score at the end of one featured Ferris getting the best of GVSU, 10-6.

Despite being down early, GVSU came out ready to play in the second quarter. Highlighted by some stellar on-ball defense, Kohley and fellow backcourt running mate Jeremy McNaughton combined for 3 steals that lead to GVSU getting a handful of opportunities in transition, which they cashed in on with 2 easy layups to tie the game at 10 all.

Ferris State guard Tyler Lawton got in on the action late in the second quarter, as he hit a nifty mid range one-legged turn around fader, ala Dirk Nowitzki, from the left baseline that sent the crowd into an uproar of excitement.

“I had a great time tonight engaging with our community in a fun and friendly environment,” said GVSU student Zack Kirshner. “It always feels good to come out to something exciting like this and give back to our community.”

Coming out of halftime, Borders decided it was time to take over for Area 5 and Ferris State. Borders collected all 8 of the Bulldogs points in the 3rd quarter, which included hitting a pull up 3-pointer from the left wing and a driving and-1 layup through two GVSU defenders. While Borders took over, GVSU struggled on offense, getting just one basket from Taylor Lezman and one free throw from forward Tony Ross.

“Early on there were a lot of people telling me that they’re too big, that they can’t keep up,” said Taylor-Lezman after the game. “But they proved they can get up and down the court just as quick as me, if not faster. They got a lot of great guys over there.”

Kohley and McNaughton, who combined for 15 points and 5 steals by the time the final buzzer sounded, went back to work in the fourth, providing solid defense that turned into offense and kept GVSU in the ball game.

Borders was balling out, as any time GVSU had any momentum in the fourth, Borders quickly took it right back, bullying smaller defenders and using his handles to find a way to finish in the lane.

Borders finished the game leading all scorers with 18 points, while also adding 3 rebounds, 2 assists, and a steal, and Ferris walked away with an 8 point victory, 34-26.\

While Ferris State walked away with the victory, everyone won on Tuesday, Dec. 3 because, just like last year, this was a game to remember.

“This event is a great time, the kids just love it,” said Sandy Marlink, who has worked with Special Olympics for 23 years, coached Area 5, and is mother to one of the players, Eric Marlink. “They get out there and get to have fun, and that’s what it is. It’s all for fun.”