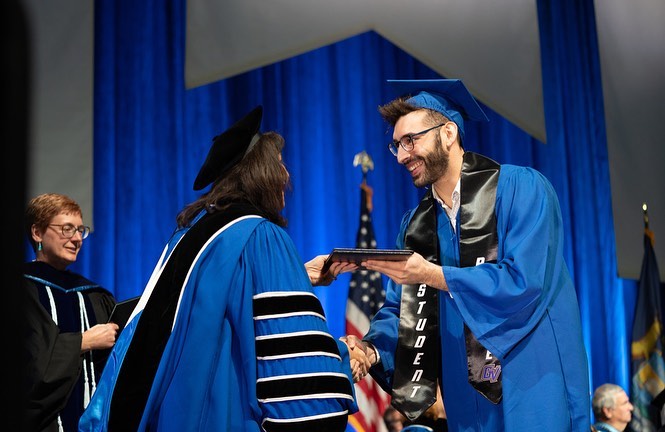 Of the 1,386 graduating students was clinical exercise science major Nick Stevens, whose interest in physical therapy brought him to GVSU, while the campus climate inspired him to stay.

“After touring, I just fell in love with the campus and everything,” Stevens said. “I knew it was where I wanted to be.”

His decision to go to GVSU was influenced by the opportunities available to students, Stevens said, mentioning that he was drawn to fraternity life because it allowed him to make strides against type 1 diabetes, a condition affecting his grandmother.

After joining the Honors College, Stevens joined the Athletic Training Club and took on leadership positions as well as volunteering.

Stevens said two of his honors courses opened his eyes to the struggles that others go through, and that he will carry these lessons through life.

“Both of those classes combined helped me to understand more what everyone else is going through… how differences can create so much hate,” Stevens said, adding that he tries to spread this awareness to others in his daily life.

While his initial journey at GVSU has ended, Stevens is already looking to the future and remaining at GVSU for his graduate degree.

English major Ashley Hull also joined the ranks of GVSU alumni on Saturday. For Hull, coming to GVSU was an easy choice.

“We toured Grand Valley my sophomore year of high school… and just being here felt like I really belonged,” Hull said. “I just couldn’t stop thinking about Grand Valley for the next three years, and it came time to apply and I was like, ‘Grand Valley.’”

Hull said her plans for after graduation are already underway, having submitted an application for a Library Science Program to earn her graduate degree. Although her GVSU degree is complete, Hull said GVSU has impacted who she is.

“I was able to really find who I was,” Hull said. “High school wasn’t the best experience for me, so getting to come here and learning things I actually enjoyed and learning how real friendships worked and things like that, I really feel like I’ve grown into the person I’m supposed to be.”