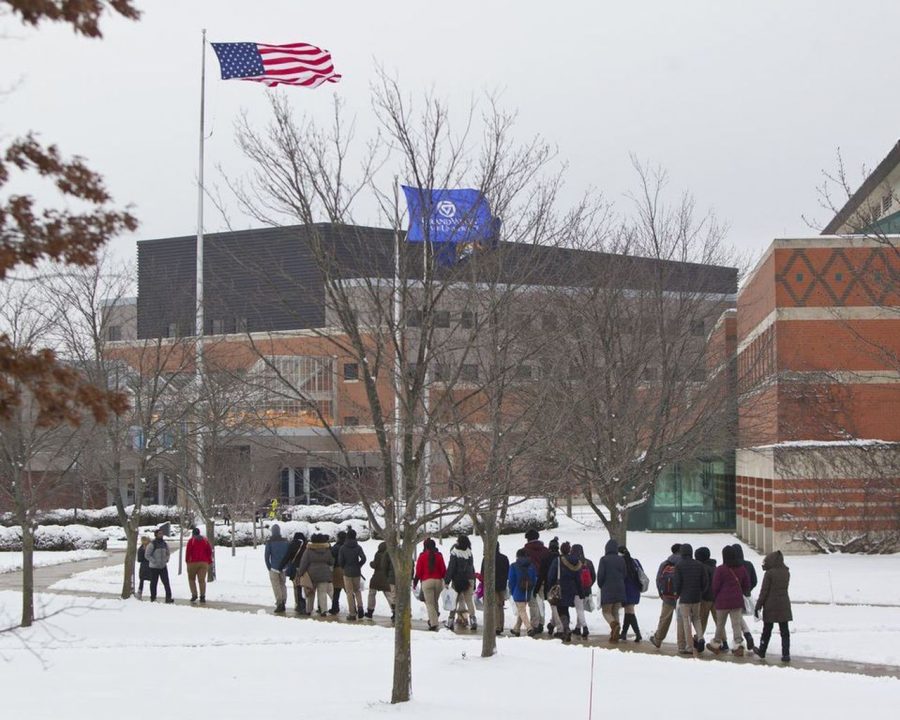 In December 2019, both the Interfraternity Council (IFC) and Panhellenic Council (PHC) held elections for the next school year. The outgoing IFC and PHC presidents are Eli Ong and Julia Henderson, respectively. Both said that their biggest goal was to end the alcohol ban put in place in October 2018 by Grand Valley State University Administration, otherwise referred to as the moratorium.

“When I became president, the moratorium was just starting and I served on the task force,” Henderson said. “A big goal of mine was to hopefully serve while the moratorium ended and change the negative light that greek life was viewed in.”

The task force was a committee created by the university to identify problems socially within the community and figure out policies to help facilitate a realistic and effective solution. The task force met every Friday.

Although Henderson served on the task force, Ong sent his Vice President of Judicial Affairs, Kyle Holka, to sit in on the task force meetings each week, at Holka’s request. Holka would update Ong each week and keep an open line of communication. As his right-hand man on the council, Ong says Holka was his most trusted board member.

“I would say that Kyle and I accomplished a lot together,” Ong said. “We put a lot of effort in meeting with the Dean of Students Loren Rullman and the Interim Director of Student Conduct Jake Stodgel over the year and maintained open lines of communication back and forth. We did this to try to facilitate a quicker development of the greek life action plan that ended up being (put) in place.”

On top of meeting with University Officials, Ong and Henderson brought their councils together and met multiple times over their term. They met to discuss the state of greek life and what they could do to help get the moratorium lifted. Henderson said that it would be on both fraternities and sororities to hold themselves accountable in order for any progress to be made.

“We had a meeting last semester to make sure that the IFC fraternities were holding themselves accountable because that wasn’t always the case and we wanted to communicate that,” Henderson said. “However, the women are the ones that go to those parties so we have to hold ourselves accountable too.”

As many people are aware of, the moratorium was lifted in April of 2019. However, that never would’ve been possible without the hard work of Eli Ong, Julia Henderson and their executive boards. In the past, these councils have never had a reason to collaborate. This is something that new IFC and PHC presidents Zack Kirshner and Kaitlin Bayer are hoping to continue, even without the moratorium.

“I definitely want to have a good relationship with Zack,” Bayer said. “I don’t see why it can’t be a beneficial relationship where we pool our minds together to help each other solve problems that the other is facing.”

Besides getting the moratorium lifted, Henderson’s biggest goal for her presidency was to change the Panhellenic Council’s election process. In the past, a slate committee comprised of one member of each sorority would review the online applications that were submitted and make a decision on each position. Henderson, with the help of her council, implemented a new election process that was a little more hands-on.

“We kept the online application but changed a few questions, with a new one being related to the moratorium. We also decided to implement interviews. Each position holder from executive board sat in on the interview for their position,” Henderson said. “If a sorority wasn’t represented, then they would be able to send a woman so that every chapter was represented in these interviews. At the end of the process, the slating committee met and they looked at the applications and the notes from the interviews to make their decision.”

With this new process, there would be two or three people involved in the process, as opposed to just one. This new process is what helped Bayer have the chance to run for Panhellenic President because she didn’t go for it until the first slate failed for President and Vice President of Recruitment, because they weren’t confident in the people that were running. After further consideration and encouragement from her sorority sisters, she ran from the floor and won.

“Sometimes girls just need that person to slap them in the face and say, ‘Kaitlin, what are you doing?’” Bayer said. “That’s what Greek Life is all about.”

Bayer said her goal for her term is to bring back the excitement to the greek community.

As Vice President of Rho Gammas last year, Bayer oversaw the active sorority women that would temporarily disaffiliate to help potential new members find the sorority that best suited them over a two weekend process. Shifting to her term as President, Bayer wants the community to be more informed about the decrease in Panhellenic recruitment numbers, which is due to more than having a new sorority added to the pool this year.

“The biggest factor in the decrease was that the VP of Recruitment, Laura Miller, implemented pre-recruitment events, which are informational meetings on getting girls as much information as we could before they go through our recruitment process,” Bayer said. “In the past, we would have 600 girls sign up and 300 would go through. This year, the total number of girls went down, but the number of girls that ended up accepting a bid was around 300 anyways, so we were actually very close to our bid acceptance number.”

Bayer also added that part of the reason the numbers are down comes from the National Panhellenic Council.

“With Delta Gamma joining our campus and recruiting this past fall, it lowered our campus total from around 134 girls to 108 girls that each chapter can have,” Bayer said. “As a result, there was a lower number of girls that each sorority needed to recruit in order to meet that number so that contributed to the decrease as well.”

Similarly, Kirshner is hoping that he’s able to avoid getting in the rut that he said IFC Presidents of the past have gotten in: just riding the wave out.

“I don’t want to be like any other IFC President; I want to create my own wave and step out of the box,” Kirshner said.

Although he wants to be different, Kirshner said he wants to make sure he has a good relationship with his executive board and focus on chapter accountability.

“My level of success that I expect is dependent on not only my vice presidents doing their job, but me putting it all out there and doing mine as well,” Kirshner said. “It would make me happy to see chapters being held accountable for their actions, and living up to the standards and values of the University and Grand Valley Greek Life.”

Kirshner also mentioned that there would be a new fraternity coming to campus. In Fall 2020, Pi Lambda Phi will start recruiting potential new members.

“They seem like a great group of guys and would help build our culture a little bit and help shift it in the direction we want it to be,” Kirshner said. “They will be doing a sort of informal recruiting, similar to what Pi Kappa Phi did a few years ago.”

Former Presidents Eli Ong and Julia Henderson have reassured Bayer and Kirshner that they will be around as a resource for them as they both start their terms, which hasn’t been done in the past.