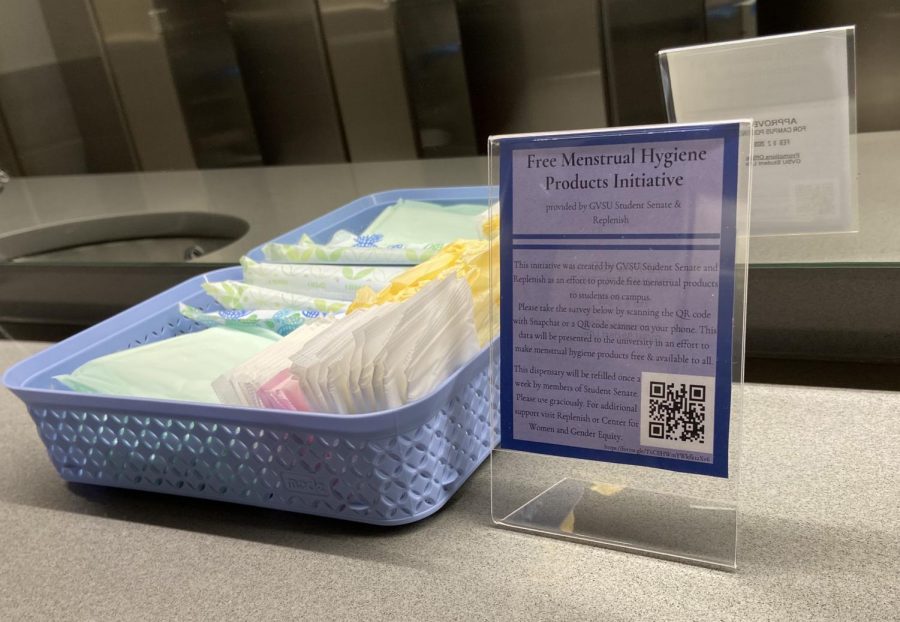 A collaboration between Grand Valley State University’s Student Senate and Center for Women and Gender Equity is providing free menstruation products in various bathrooms around campus for patron use. Right now, five female and gender neutral bathrooms are included in the initiative’s rollout, all placed throughout GVSU’s Allendale campus.

Center for Women and Gender Equity Associate Director Sharalle Arnold said she had heard of interest in an initiative like this come from several places, but closely worked with Alex Hicks, Chair of Student Senate’s Sexual Assault Awareness Committee, after they reached out to Arnold. Hicks said Student Senate has been trying to work on this sort of initiative for a few years, following in the footsteps of Central Michigan University and Saginaw Valley State University, who have unveiled their own versions in years past.

The current iteration of the initiative is a tentative, temporary one, but Hicks said that they have plans to continue the service further if provided the proper support from Student Senate and the University.

“Given the interest that I have received so far… I’m planning on continuing it throughout the rest of the school year,” Hicks said.

Hicks said the partnership between Student Senate and the Center for Women and Gender Equity felt natural, as it includes Replenish, GVSU’s food resource, which also collects and provides these products. Arnold offered Replenish as a way to initially provide products to the initiative, but Hicks suggested that a proposal for Student Senate to fund future products could be on the board in the future.

A key part of the initiative also includes an educational component, as providing free menstrual products shines a light on the high prices that those who menstruate have to pay each month. The duo also noted that it may not be just women who menstruate, but those who identify as non-binary or male as well. Providing free, open options for all students acts as a way to demystify this conversation while making sure students undergoing financial hardship do not have to chose between a meal and menstrual products, for example.

“What I think is the best part of this is that as folks who are menstruating, we don’t opt in to it — it is just a natural, biological thing that happens,” Arnold said. “So therefore, trying to mitigate that taxation that happens because basically, it’s a tax that we have to participate in, and the price of menstruation products is extremely high.”

Both Hicks and Arnold said that they hope the initiative continues to grow, as they have already received positive feedback from not only those using the products, but those in buildings distributing them, including those in the Honors College. When Hicks spoke to Honors College Director Roger Gilles, he said the Honors College could also provide their own products in their bathrooms, which Hicks said was an encouraging step toward facility-level support.

“We cannot assume that this responsibility, care and concern should be left up to folks that are, ‘Oh, you’re Women and Gender Studies so you should care,'” Arnold said. “No, this should be campus-wide attention and support, and all of us thinking about it.”

Bathrooms currently included in the initiative include female and gender neutral bathrooms in Mackinac Hall, the Mary Idema Pew Library, the Kirkhof Center, Holton-Hooker Living and Learning Center and the Marketplace. Student Senate is also collecting feedback from any and all students.