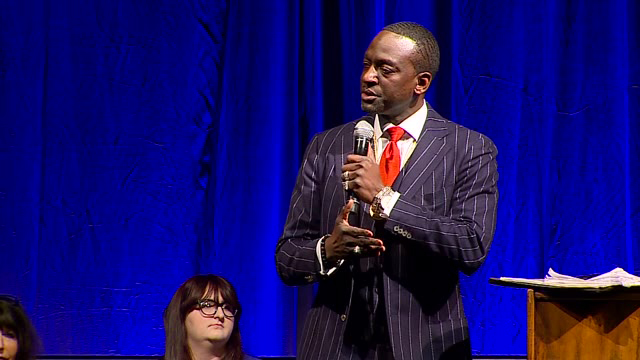 “It’s Raymond Santana,” Salaam said, smiling. “This has never happened before… Should I answer it?”

The crowd erupted in cheers.

Santana and Salaam are two of five men, known more commonly as the “Central Park Five” and more recently as the “Exonerated 5,” who were wrongfully convicted of rape during the 1989 Central Park jogger case in New York City.

Salaam infused humor with wisdom in his speech, expressing gratitude for his life journey and calling the story of the Central Park Five a “beautiful” one. The hour-long speech focused on how his experiences with the judicial system were a sign from a higher power.

“What God was doing to me was reconnecting me to myself so I would not die,” Salaam said.

He didn’t realize this divine purpose right away.

One day a prison guard approached him and asked, “Who are you?” Salaam responded with his name and the crime he was locked away for. “But I didn’t do it,” he said. “I was wrongfully accused.”

The prison guard simply said, “I know that. You aren’t supposed to be here. So why are you here?”

This encounter, Salaam said, completely changed the trajectory of his life. He earned a college degree while in prison, and upon his release has dedicated his life to educating others on the disparities within the criminal justice system.

“I want to focus my studies on civil rights,” Hansen said. “I thought this would be something that would help.”

Hansen, who is planning to major in political science and pre-law, said one day she wants to be a lawyer with the ACLU to help people in the same situation Salaam found himself in at the age of 14.

Unfortunately, Hansen could find herself with an exhaustive list of clients.

“Our case,” Salaam said of him and the rest of the Central Park Five, “is as American as apple pie.”

Although the gap between black and white prisoners has no doubt narrowed over the last decade, black folks are still wildly overrepresented in correctional facilities, while the opposite is true for their white counterparts.

“The circumstances of Dr. Salaam’s experience with the criminal justice system is not an anomaly,” said B Afeni McNeely Cobham, the Chair Chief Equity and Inclusion Officer at Grand Rapids Community College, who hosted the event along with Grand Valley State University and Davenport University.

Americans, particularly black Americans, have been advocating for criminal justice reform since the times of slavery. Salaam ended his speech by reading Gil Scott-Heron’s 1971 spoken-word poem “The Revolution Will Not Be Televised,” which highlights the ways the predominantly white media misconstrued or completely ignored black civil rights leaders.

Salaam said this was true during his trial as well. He held up a laminated piece of paper with a full page ad taken out in the New York Times by then real-estate mogul Donald Trump, who called for the five men to be convicted and hanged only days after they had been taken into custody.

After several gasps and a “boo!” from the audience, Salaam continued on to say that the president was only a symptom of what he called a “sick” America, rather than the disease itself.

McNeely Cobham said she felt compelled to include Salaam in this year’s celebration because of the “myriad of tangible ‘life lessons’ in Dr. Salaam’s journey,” and said the feedback she’s received to his speech has been “overwhelmingly positive.”

“This response demonstrates two things,” Cobham said. “A lot of people can relate to Dr. Salaam’s journey, and appreciate his ability to walk and talk in the power of his truth.”