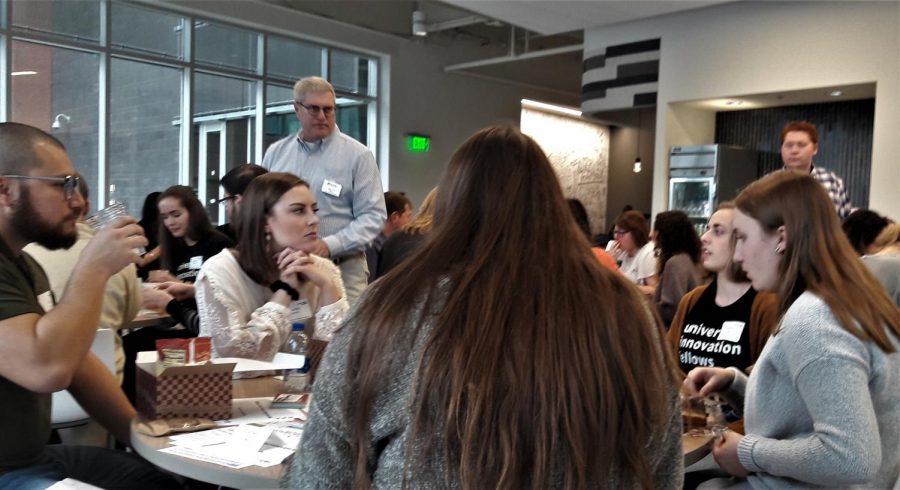 “The Design Thinking Academy does a wide range of events on our own, but this is a collaboration between us and the President’s Reach Higher Initiative,” said Mei Mah, Associate Director of the Center for Educational Partnerships. “We’re thinking about places where we might engage people and transform the university. It’s not for people who are already graduated, but for its current users and those who will be using the education system in the future. The idea is really having empathy for the people who use post-secondary education to transform their lives.”

But strenuous mental activity, much like strenuous physical activity, requires a warm-up. In order to brainstorm methods of transforming GVSU, students first had to practice rapid-fire idea production.

“Innovation and imagination is about building on ours and other people’s ideas, but as we get older, our view of ourselves as imaginative plummets,” said Dave Coffey, Professor of Math Education and Director of the Design Thinking Academy. “One of the reasons is that as we get older, our prefrontal cortex starts growing, making us more cautious. Which is good, of course. But in our culture, that cautiousness makes us obsessed with trying to be perfect.We’ve been conditioned to want to get it right the first time, but it’s okay to fail. Our brains need to reflect on failure in order to learn — as a math educator, I tell my student teachers this on a regular basis.”

The gathered students were then split into groups of four to five, each led by a Table Coach from the Design Thinking Academy. The teams were asked to use Design Thinking paradigms to come up with their own answer to one central question — how might we enhance the student experience at GVSU?

Their approach was informed by the Innovator’s Compass, a tool designed by Olim College Professor of User-Oriented Collaborative Design Ela Ben-Ur. Used for brainstorming solutions, the compass centers people (who’s involved?) but points users in four additional directions — observations (what’s happening and why?), principles (what matters most?), ideas (what ways are there?) and experiments (what’s a step to try?).

Groups created their own lists for each point, then built off of individual points where they saw room for improvement. One group listed people with disabilities as an important part of who’s involved at GVSU, then expanded that point into mental health as well as intellectual and physical disabilities. Another group observed several flaws with the food system on campus, noting food waste, the overpricing of items in “convenience” stores, and meal plan inefficiencies. They then narrowed their focus to GVSU’s exclusivity contract with Aramark, the company responsible for most of the flaws the group identified (as well as food safety violations country wide, including feeding inmates in U.S. prisons “meals laced with maggots, dog food, worms, rat-bitten scraps, and garbage”).

Once groups had finished their brainstorming, Xavier Golden, a student employee at the Design Thinking Academy, addressed the assembled students about another GVSU program led by Dr. Coffey that uses the same skills they’d developed during the workshop.

“TEDxGVSU is also looking for ways to grow our community, and our new, more intimate format is very similar to the work that was done today,” said Golden. “TEDx is a platform for individuals to share ideas that could improve GVSU, whereas Design Thinking is collaborative in nature. Both TEDxGVSU and the Design Thinking Academy are always looking for new people.”

“This was an experiment for us,” President Philomena Mantella said at the closing of the event. “We didn’t come into the room knowing what it would be like from here on out. But the result was incredibly insightful. One of the wonders of innovation and design thinking is that you find who you need when you need them.”

She identified seven main themes that students had focused on during the workshop; financial literacy and independence, GVSU’s advising model, expanded career support experiences with financial benefits, help with resume and career building, campus food insecurity and quality, matching up students with faculty/staff mentors, and a sense of belonging to the university.

“The one thing that came up over and over again was mentorship,” said Tatiana Parsons, Assistant Director of the Design Thinking Academy. “For me, that meant students want authentic connections with other people, and not just their peers. What we need to do as a student body is not only to encourage that in others, but to let ourselves have that authentic connection.”

Coffey was impressed by what the gathered students had accomplished, as most Design Thinking workshops of this nature are all-day experiences at the minimum.

“These sorts of experiences give me a lot of hope in terms of the next generation,” Coffey said. “You hear a lot of people bash them for a variety of reasons, but this workshop demonstrated that young people have the innovation, they have the creativity. We just have to give them the opportunity.”