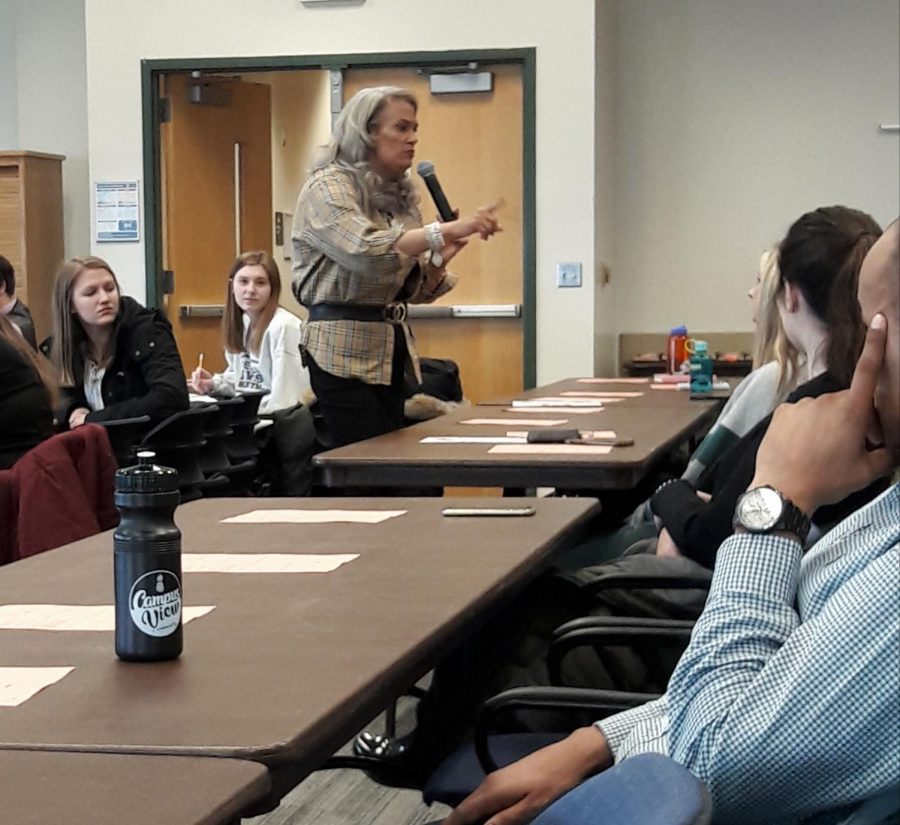 On Friday, Feb. 7, National Black HIV/AIDS Awareness Day, the Office of Multicultural Affairs invited AIDS activist Rae Lewis Thornton to speak as a part of their Black History Month Program. Thornton started her career as a political organizer, having worked for multiple presidential campaigns before turning 24. It was while working on the 1984 campaign for Reverend Jesse Jackson — the first presidential candidate to have an AIDS policy — that Thornton received her diagnosis.

“I was diagnosed with HIV when I was 23 years old,” Thornton said. “I organized a blood drive after seeing news reports about an Amtrak accident, and how people were afraid to donate blood because they thought that it could infect them with HIV. I sent out notices, baked cookies and brownies, and a couple months later I got what I thought was a thank you letter. Instead, it told me something was wrong with the blood I donated. The next day I went to the Red Cross and they told me I was HIV infected.”

Thornton describes leaving the Red Cross in a state of “quasi-denial.”

“’Lord,’ I would say, ‘I can handle HIV, just don’t let me get AIDS,’” Thornton said. “The eighth year, I transitioned into AIDS. I went from a size 12 to a size 10 to a size 6. I started to have menstrual cycles that lasted 21 days. I woke up in the morning crying, I went to bed crying. I became angry at God. I went from three pills a day to 23. The medicines were making me feel so sick and nauseous, some days I couldn’t hold my head up. I would pull the label off the pill bottle and flush it down the toilet because I didn’t want anyone to know — I worked in politics, I didn’t want my career to be affected. The secret was killing me quicker than the disease.”

In the first seven years, Thornton had only told five people outside of men she dated about her HIV status.

“But then, I saw death staring me in the face,” Thornton said. “My body was wasting. I started disclosing my HIV status to prepare my friends for my death. I remember standing in my mentor’s kitchen, saying, ‘Reverend Jackson, I have to talk to you.’ I told him I had AIDS. When I started rambling, he stopped me and said, ‘Rae, I loved you before AIDS, I love you with AIDS.’ And then we prayed.”

Today, successful treatments have reduced the amount of the HIV virus in Thornton’s body to a number so low that doctors can’t give her a detectable count. At a viral count so low, Thornton can no longer transmit HIV to other people.

“If you get diagnosed with HIV today, you never have to transition to AIDS,” Thornton said. “The treatment and care is so remarkable — much more advanced than the attitudes around the disease. That’s why you have to get tested, so that if you are infected you can get treated immediately.”

Stereotypes surrounding HIV and AIDS can result in doctors never thinking to test demographics who aren’t associated with the disease, like white women or straight men. This can lead to cases where an infected person isn’t diagnosed until its too late.

“There are no HIV symptoms, so you could be walking around infected and not know it,” Thornton said. “The symptoms you hear people talk about — weight loss, fatigue — they don’t come until your immune system is already compromised. What’s a compromised immune system? AIDS. Go get tested, cause you don’t know who’s infected. You think you know, you hope you know, you might even pray you know, but at the end of the day you just don’t know. Why would you live in that level of arrogance? Why would you back yourself against the wall like that?”

Thornton’s testimony was the third event in Grand Valley State University’s Black History Month Calendar, one that will continue throughout the next few weeks. Upcoming events include a celebration of Black Gospel music on Monday, Feb. 10; a “Talk Back Tuesday” on Feb. 11 discussing domestic violence and sexual assault against African American women and girls; a presentation on “Afro-Latinx Identity and the African Diaspora” on Tuesday, Feb. 11; a “Celebration of Black Arts” hosted by GVSU Positive Black Women on Friday, Feb. 14; a special edition of “Conversations of Color” focused on the experiences of African-American students on Wednesday, Feb. 19; and a “Taste of Soul” presentation on Thursday, Feb. 20.